Da Costa continues extending his championship advantage, while Buemi and di Grassi finish on the podium. 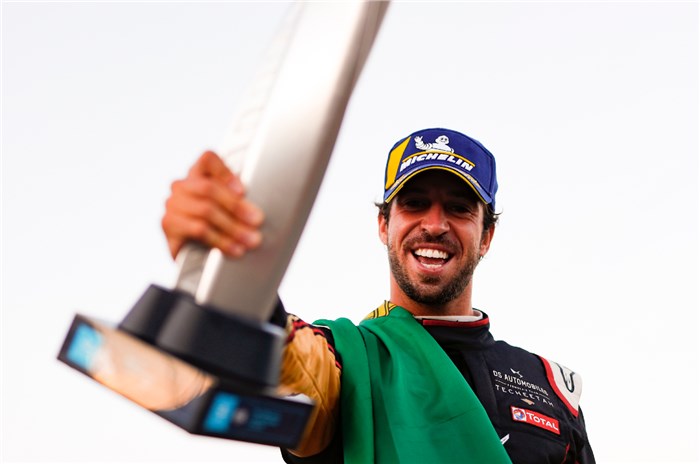 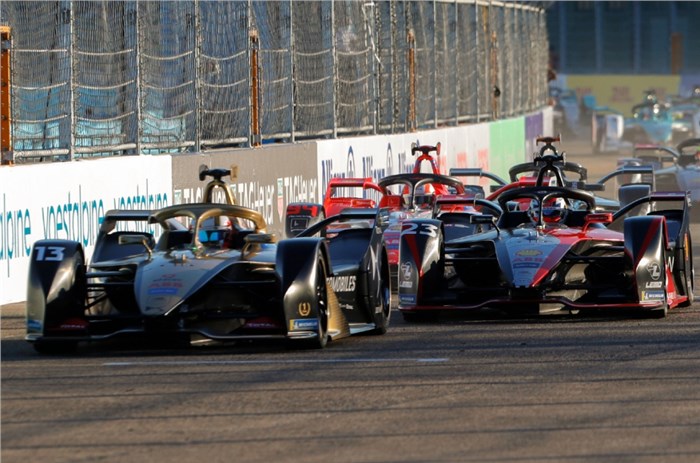 DS Techeetah’s Antonio Felix da Costa is starting to stamp his authority on the 2019/20 Formula E championship, after securing yet another commanding win in Berlin.

The Portuguese racer kicked off the all-electric series’ six-race season finale on a strong note by taking a clean sweep at Round 6. Proving that the result was no fluke, he followed that up with yet another dominant performance in Round 7, once again claiming both pole position and the race win.

Buemi and di Grassi on the podium

Just like the previous race, da Costa led every single lap this time around, even when he had to move off the racing line to activate his higher power attack modes. The Techeetah driver has mastered a rather unique line across the three activation points, which has helped him hold on to his position.

Sebastien Buemi spent most of the race trailing da Costa. His first Attack Mode was essentially wasted when a full-course yellow was activated to pick up debris on the track. The Nissan driver reckons that he probably would have been a lot closer to da Costa, had it not been for that.

“I was unlucky with the first Attack Mode as there was full-course yellow and I lost its advantage – that would have probably changed things. I had to overtake Lucas and wasted some time there, but in terms of pace we weren’t too far off. DS Techeetah are extremely quick, hopefully on Saturday we’ll have more pace during Qualifying,” said Buemi.

“Today we have made a big improvement, on Saturday we’ll be racing on the original track and we hope to do even better ahead of the next race and maybe challenge them.”

Audi’s Lucas di Grassi came out on top in a four-way battle for the final podium position.

Virgin Racing driver Robin Frijns had to settle for 4th place after being unable to find a way past di Grassi. Behind him, Stoffel Vandoorne waged an impressive climb up the grid after starting down in 13th place.

The Mercedes driver pulled off one of the standout moves of the race on lap 22, overtaking Nissan’s Oliver Rowland and Virgin Racing’s Sam Bird around the outside at Turn 6.

Further down the order, BMW didn’t score any points. After being handed a pitlane start and a drive-through penalty for a battery change, Alexander Sims was only able to recover to finish 20th. His teammate Max Gunther retired after picking up a puncture on lap 9.

Meanwhile, Nyck de Vries has been handed a fine and five-place grid penalty for causing a dangerous situation. The Mercedes driver exited his car without permission after stopping on the run-off at Turn 2, and then proceeded to push his car off the circuit when other cars were present on track.

Mahindra Racing didn’t enjoy the best of races. After a strong showing in qualifying, Alex Lynn started the race from 3rd place but he started slipping down the order as the race progressed and eventually finished 11th.

Jerome d’Ambrosio finished 15th, but was later disqualified from the final classification for going over the total permitted energy limit.

What does the 2019/20 Formula E drivers’ championship look like?

Going into the Berlin season finale, it was a four-way battle for the title, with da Costa leading the way just 11 points clear of Jaguar driver Mitch Evans. BMW’s Alexander Sims and Max Gunther weren’t too far off in the standings either.

However, Evans hasn’t been able to score a single point in the two races so far, while BMW has endured a string of bad results. All this has allowed da Costa to extend his lead (with 125 points) to a rather comfortable 68 points from di Grassi and Vandoorne, who are both tied in 2nd place with 57 points each.

Evans, on the other hand, has dropped to 4th place and is currently one point behind di Grassi and Vandoorne.

There’s yet 120 points up for grabs in the remaining four races, but it already looks like this is da Costa’s championship to lose.

The Formula E grid will now take one day off before Round 8 gets underway on Saturday. This time around, the drivers will race on the original layout, which has more overtaking points. You can head here for the complete schedule of the 2019/20 Formula E finale.