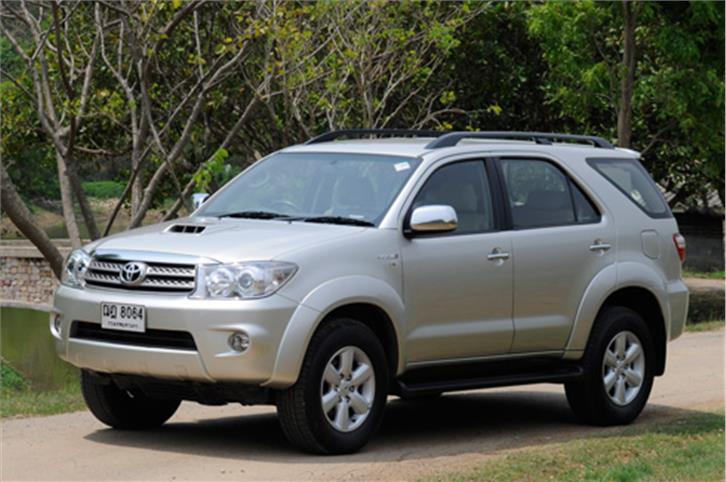 It’s been a really long time coming but come September the Fortuner will be in Toyota showrooms. Does the macho SUV live up to the great expectations?Superiority among classes, superiority among the sexes and superiority among Gods. The concept is very much at home in India. In our infant automotive world, SUVs are considered the lords of the streets. They have a certain genetic superiority — the impervious-looking giants are blessed with the luxury of peering down at less weighty road users and they thunder, unperturbed, over inhospitable terrain. Their cavernous interiors can host quintessentially large Indian families in reasonable comfort and to add to that, diesel SUVs go about their tasks without costing an arm and a leg. It all adds up to a lot of sense and lots of yearning.

The preamble is essential to understand the impact of one SUV in particular — Toyota’s Fortuner. This hulking SUV is based on the IMV (Innovative International Multi-purpose Vehicle) platform which is used for the Innova. So the Fortuner was expected to blaze into India after the Innova’s launch in 2005. But it never came. The Innova’s success, thanks to its solid underpinnings, spacious interiors, robust and frugal drivetrain, added to Indian SUV enthusiasts’ impatience for the Fortuner.

Toyota always wanted to launch the Fortuner but the question was when? The slow-moving Japanese giant took its own sweet time in putting a plan together and finally the project was given the green light only a few months ago. But with so much time lost and the first face-lift around the corner, waiting a few more months for the latest version was the smart thing to do. The Fortuner will finally be here in September 2009 and our extensive test drive of the Thai model around Bangkok gave us something to look forward to.

FIRST LOOK
First impressions last long and the Fortuner makes an almost indelible one. This SUV’s design isn’t exactly groundbreaking and is rugged without being military-like. It looks urban without being slick. While it doesn’t have any of the contemporary design of the Honda CR-V or the Chevrolet Captiva, the Fortuner feels like it hails from the old school of SUVs and wouldn’t be ashamed to stand shoulder to shoulder with brawny SUVs twice its price. It offers the right combination of its cousins — there is a Prado-like haughtiness and the LandCruiser’s purposefulness thrown in.

The only extravagance that the Fortuner allows itself is the kinky new headlights that were introduced in the 2008 revision. They curve around the grille and the effect looks great. But that alone cannot create a lasting impression. So what does? It’s the size. The Fortuner is well and truly massive, dwarfing soft-roaders like the Captiva and matching the titanic Endeavour for sheer road presence. The Fortuner’s wheelbase and length are considerably shorter than the Endeavour’s but it’s wider and nearly as tall. Like its Ford rival, the Fortuner has the same square and robust look but it’s more rounded with lots of stylistic touches, like the rear quarter-glass which melds into the tailgate glass area. The rear looks quite plain-Jane with only the chunky wraparound tail-lamps and a rear skid plate offering some break in the monotony.

Don’t expect fireworks on the inside either. If you’ve been inside an Innova, you will feel very much at home in the Fortuner. The two-tone dashboard is topped with a vast slab of grey and at its centre sits a large touch-screen. The air-conditioning controls are positioned under this. The Climatronic AC system was added in the 2008 facelift and is shared with the recently upgraded Indian Innova. Just as in the Innova, there’s air-conditioning for all three rows of seats. The steering wheel too is similar to the Innova’s. Via the touch-screen interface, you can control the audio system, GPS  and the clever in-built car maintenance reminder.

However, it’s not clear if this feature will be available in the India-spec car. Surprisingly, some of the plastics also didn’t feel top-notch but, again, it’s possible that for the India car Toyota will inject a more luxurious ambience into the interiors by way of different fabrics and materials. The driver though is pampered sufficiently in the Fortuner with tilt-adjust steering and the seat with powered six-directional adjustment. The front passenger, however, will have to make do with manual adjustment. There is no skimping on space in this seven-seater. The Fortuner easily feels more spacious than the Endeavour and tops the Captiva for seating comfort. The second row of seats boasts of great knee room and excellent thigh support. The backrest can also be adjusted for rake. The third row of seats is a bit of a squeeze and being quite low under-thigh support is poor, but it’s nowhere near as unusable as the Endeavour’s last row. Shortage of knee room can be adjusted to some extent by sliding the middle row of seats forward.

HEART OF THE MATTER
Back in the driver’s seat the 2982cc common-rail diesel motor is waiting to be tested. The engine promises 160bhp of power and 35kgm of easy torque, aided by a variable geometry turbocharger. This makes it more powerful than the Endeavour but the Ford SUV crucially has more torque.  On the go the Fortuner’s engine feels adequate at best with the permanent four-wheel drive, automatic transmission and near two-tonne kerb weight blunting some of its edge. The four-speed auto is a bit sluggish but once the Fortuner is up to speed it cruises quite well. The good news is that the India Fortuner will first come with a five-speed manual transmission. This version is likely to have oodles of grunt to make it a great car for long-distance jaunts.

Big SUVs like this, which are built on a beefy chassis and suspended by stiff springs and dampers, can be extremely bumpy. However, since the Fortuner shares its suspension bits with the Innova there’s little to worry about. The Toyota comes with solid double wishbones and coil springs at the front with a four-link, coil-spring set-up at the rear. And it all works well. Despite being stiffly sprung, the Fortuner is comfortable to ride around in. It soaks up dips and bumps without rattling your bones and offers a very relaxed environment. It’s only on some wavy stretches of tarmac or cement surfaces that you find out the car bobs around a bit. The ride and handling balance is pretty good and let’s hope Toyota doesn’t alter it for Indian roads.

Body roll is inevitable for such a tall SUV but it isn’t worrisome even when pushed hard. However, the Fortuner isn’t quite like the Honda CR-V when it comes to handling. The CR-V, built on a monocoque, feels car-like to drive while the Fortuner still feels like an SUV but quite under control. The Vehicle Stability Control uses brake force distribution and engine output to rein things in. The contact patch from the massive 265/65-R17 Bridgestone Dueler HTs offers huge levels of grip and the steering, though direct and well-weighted, feels a little devoid of feedback.

Take the Fortuner out to kick up some dust and you’ll have the option of 4-Wheel High and 4-Wheel Low modes with the option of locking the differentials. The terrific 220mm ground clearance allows the Fortuner to pound its way over bad terrain with ease. Plus, you have the might of ESP, EBD and traction control to hold it together. But even though the Fortuner is a very capable off-roader, it does its primary job of clipping down the highway with the entire family in search of the next holiday destination very well.

Has the Fortuner been worth the wait? Can it take on the stylish, well-specced and punchy Chevy Captiva? Will the lure of a strong diesel engine, auto transmission option, three proper rows of seats, excellent ride and decent handling entice customers away from the Endeavour? We think the Fortuner is a well-rounded SUV that can easily carve out a chunk of the segment for itself. But that will come down to the pricing of this big, capable SUV. The Fortuner is expected to carry an on-road price-tag of around Rs 20 lakh when it’s launched later this year. That’s pretty good value for a fully-loaded SUV that wears the Toyota badge. The Endeavour, which has ruled supreme as the premium SUV king, may have to run for cover.