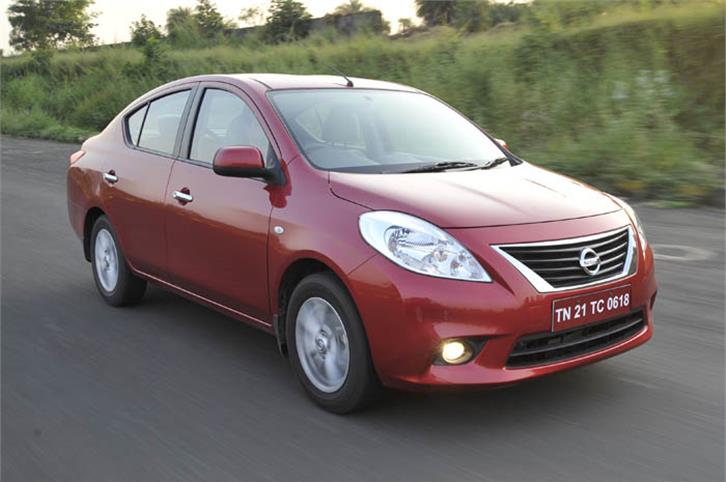 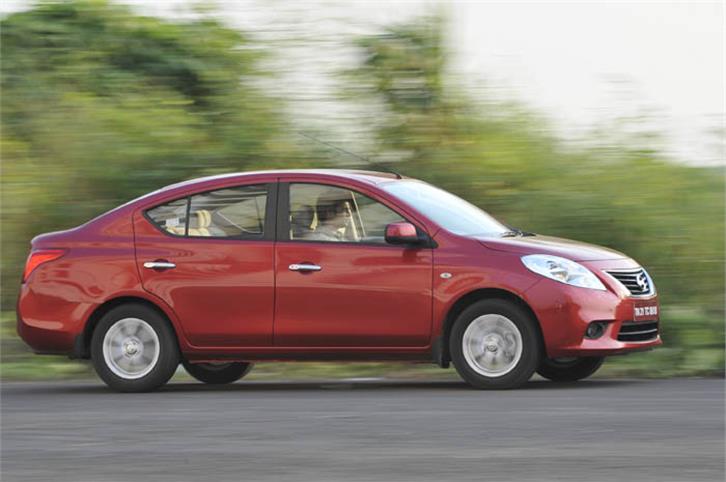 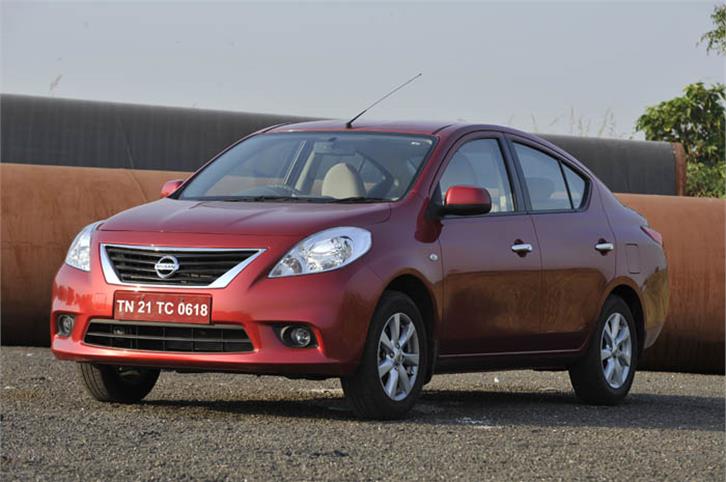 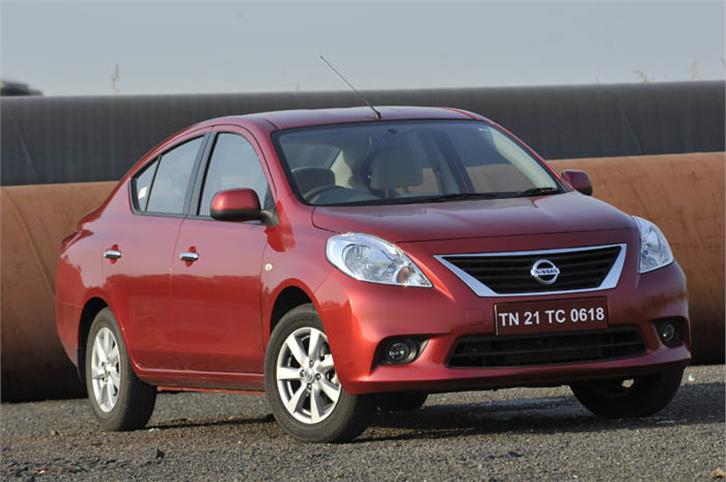 Nissan's got the Sunny's price spot- on. At Rs 5.68 lakh to Rs 7.68 lakh, there's no other saloon in its segment that matches it on sheer space and equipment levels.

The Sunny is based on the same V platform as the Micra. There’s no denying the Sunny is a big car and that’s largely because of its class-leading 2600mm wheelbase. The Sunny’s generous dimensions and splashes of chrome give it a mature look, and from some angles it looks like a mini Teana. However, there are some awkward bits to the styling too — like the rear, which has a massive and ungainly overhang. The flipside is that it houses a useful 490-litre boot.

The best thing about Nissan’s V-platform is its astonishingly light weight – the Sunny tips a mere 1,027kg on the scales. Key to this light weight is the inherent stiffness of the V platform and bits like the ribbed roof, which adds strength and eliminates the need for heavy roof reinforcements. Nissan has reduced the mass of the engine, the chassis is made with 20 percent fewer parts. The Indian car, like many competitors, is also not as stiff as in other markets due to our almost non-existent crash norms, and this has helped reduce weight further.

It uses independently suspended MacPherson struts up front and a non-independent torsion beam axle at the rear, with anti-roll bars at both ends. Braking is via ventilated discs in the front and drums at the rear, and steering is via an electrically assisted system. The XE and the XL come with smaller 14-inch steel rims, while the XV comes with 15-inch alloys. The Indian-spec cars also come with a rough road package that helps improve ground clearance.

The Sunny’s cabin is phenomenally spacious and Nissan proudly says that there’s enough room for rear passengers to easily sit cross-legged. True as this may be, what it fails to mention is that thigh support isn’t so generous. Sure, you can use all that legroom to stretch out and get comfortable, but even then your thighs are a bit off the seat. The front seats are very generous, however, and finding a decent driving position is easy enough – all variants get tilt-adjust for the steering and the XL and XV get driver’s seat height adjustment.

The cabin is a pleasing, inoffensive place to be. The light grey fabrics and plastics do a lot to brighten the cabin’s ambience and there’s loads of headroom, thanks to a roofline that doesn’t drop too sharply.

A lot of the Sunny’s interiors are borrowed from the Micra. The basic dashboard is the same, the difference being with the dials and the upper part of the centre console. Plastic quality and fit and finish, though not as nice as a Honda City or a VW Vento, are a lot better than a Toyota Etios. However, you can tell its light build by the lack of heft in the way the doors and the bootlid shut.

The Sunny XV is well equipped, with features like keyless entry, power windows on all four doors, electrically folding mirrors, a CD player, climate control, ABS, EBD, driver and passenger airbags and alloy wheels. The lower XL isn’t too bad either; you still get the CD player, power windows and all the safety kit, but it does without the alloy wheels, which otherwise add a much-needed dash of flair to the design. Both the XL and XV get an interesting feature – a rear seat air-circulation fan. The vents aren’t directly connected to the air-con but help circulate cool air faster.

It’s the base XE that is poorly equipped. It doesn’t even get wheel caps and the hard, black interiors make it better suited for taxi duty. But even this basic model comes with ABS and a driver airbag.

The Sunny’s 1.5-litre, twin-cam, 16-valve petrol motor (codename: HR15) makes a decent 97bhp and 13.6kgm of torque. Down from 1.6 litres as in other markets, this 1.5 also has only one injector per cylinder, as opposed to two. But because it doesn’t have much mass to move, you will find it performs more than adequately. Its 12.6sec 0-100kph time is no match for a Honda City or a Toyota Etios, but isn’t too far off a VW Vento’s and you can see this in the way it drives. The 1498cc motor’s almost ‘square’ cylinder dimensions work at making part-throttle responses peppy and giving it decent mid-range and top-end power. The best bit about this engine is how well it pulls from low speeds, which makes city driving quite a breeze.

Power delivery is quite linear all the way to the 6500rpm redline, but isn’t as smooth or willing to be revved as, say, a 1.5-litre Honda City motor. It gets quite thrashy past 5000rpm and the Sunny works best when you upshift early and use the engine’s good part-throttle responses and excellent low-rpm performance to get you to speed. It’s easy enough to maintain cruising speeds, and overtaking doesn’t require too much downshifting.

The five-speed manual gearbox has a well-judged set of ratios, but the gearshift feels a bit notchy and there’s a fair bit of transmission whine as well. However, the clutch is light and this takes some effort off the gearshifts.

As for fuel efficiency, it sipped a litre to travel 11.5km in the city, and 16.4km on the highway, and that’s better than a Honda City.

The Sunny isn’t a car that will engage the keen driver. Though it has decent body control, it simply doesn’t have the sharp steering, the grip or a combination of these and it’s certainly not a car that enjoys being hustled. It displays good stability at speed and handling is very safe and predictable, with no nasty surprises. As a family car, meant for sedate driving, the light, extremely twirlable steering and easy controls make it a stress-free car to drive in the city.

As for the ride, it is jiggly at low speeds and not very adept at handling sharp bumps, and you can feel the suspension thump through the light body. However, as you go faster, it settles down to offer a fairly flat and consistent ride.