Does the loss of two cylinders and a few features less in comparison to its elder sibling make the ML 250 CDI a less appealing buy? We find out. 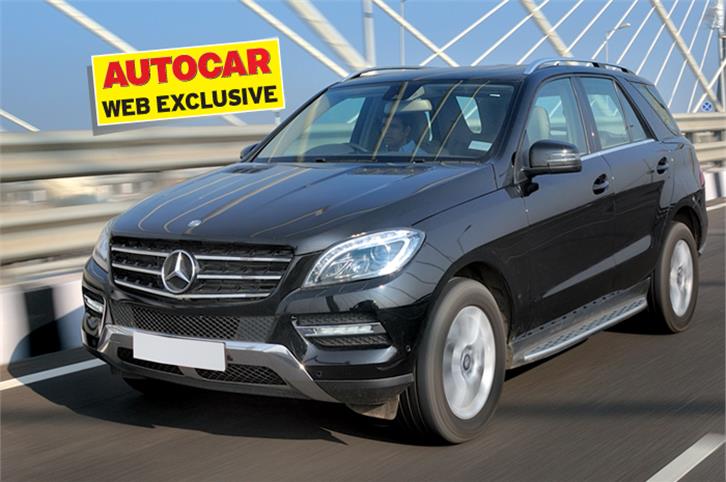 In the ML 250 CDI, Mercedes-Benz has quite a tempting car on offer. At Rs 46.50 lakh, the M-class undercuts an Audi Q5 in terms of price, and the Mercedes is a size bigger than the Audi. The four-cylinder ML 250 CDI also costs a whopping Rs 10 lakh less than the top-end ML 350 CDI. But this is not a case of Mercedes cutting corners as, apart from losing two cylinders (the full-spec ML 350 CDI has six cylinders), there isn’t much else you’re losing out on, and here’s why.

The 2.2-litre, twin-turbocharged engine under the bonnet of this SUV makes 201bhp and a very healthy 50.1kgm of torque. And while 201bhp to power the M-class’s considerable 2160kg isn’t much, it’s the torque this engine musters that makes all the difference. Flat out, it will hit 100kph in a respectable 8.8sec and will go on to a top speed of 210kph, and this is more than adequate for most of our conditions.
On the downside though, the smaller-engined ML takes more time to gather speed when attempting to overtake than the more powerful 350 CDI. Now, four-cylinder motors aren’t particularly quiet, but this one is special with its smoothness and refinement. It’s very quiet at idle and hums along gently till 3000rpm, after which there is a rather pleasing growl as you rev it to the redline. Merc’s engineers have done a stellar job at keeping this engine hushed. We just wish the seven-speed automatic gearbox was a bit quicker-acting. It shifts leisurely, with no jerks through the gears, but sometimes when you want a quick overtake, it doesn’t respond with the urgency that you demand. Even tugging at the paddle-shifters doesn’t help here – the gearbox responds a few seconds after you’ve asked for an upshift or a downshift.
Another difference is that the Ml 250 CDI makes do with conventional steel springs, as opposed to the air suspension that its bigger brother gets. This is not as bad as it sounds because the 250’s ride isn’t all that different from the air-suspension version. The low-speed ride is a bit firm, but it flattens out beautifully as you go faster. And like all Mercs, this one is absolutely, unshakeably stable at high speeds. This unflustered nature and the incredibly well-insulated cabin make for a very calm and relaxed motoring experience.
The ML 250 CDI is not as engaging to drive as some of its rivals – it’s not particularly eager at quick direction changes and you can feel the near-2.2-tonne weight moving about under sharp manoeuvres but, then again, it’s not too sloppy. With all-wheel-drive grip and a steering that’s wonderfully fluid in its action, you can extract some pleasure from driving it on a smooth, flowing road.
In all other aspects, the ML 250 CDI is as nice and capable as its bigger brother, the ML 350 CDI. You get the same spacious interiors, fantastic build quality, five comfortable seats and the special appeal that’s a part of owning a Three-pointed Star.
One of the most impressive aspects of the ML 250 CDI is that it doesn’t lose as much as you’d expect in terms of features. In addition to the air suspension, the things missing on this one’s equipment list from the 350 are the 19-inch alloys (the 250 gets 18-inch wheels), there’s no seat memory, no electrically operated tailgate closing and it doesn’t get the COMAND driver interface system, which, all things considered, are things you can live without.
So in conclusion, the ML 250 CDI comes across as a great value buy. It loses some features and two cylinders to its elder sibling, but it comes with a killer price tag and is actually bigger than the more expensive Audi Q5. Add that to the fact that it doesn’t feel like the poorer cousin, and it makes the ML 250 CDI quite a worthy buy.