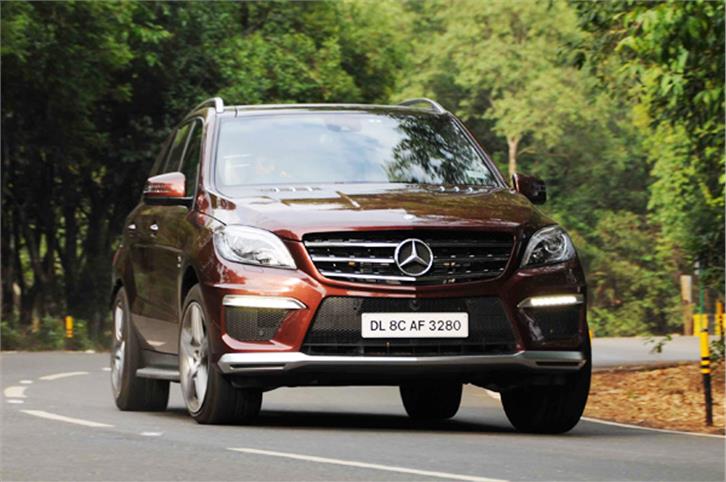 We drive the new Mercedes-Benz ML 63 AMG. It's bloody quick.

When you have it, flaunt it, is what Merc is saying right now. First it was the G 63 AMG, then last month, they unleashed the GL 63 AMG, and now there’s this, the latest incredible hulk in Merc’s Indian stable, the ML 63 AMG. It’s for people who like generous helpings and, to be honest, the mix of extra speed and effortlessness along with the SUV stance and good ground clearance does have its advantages in our country. The ML sits between the G-Wagen’s ‘butch’ and the GL’s ‘scare-seven-people-simultaneously’ abilities. Also know that the ML 63 enters a super niche segment, one that, apart from its own siblings, includes the Porsche Cayenne Turbo and the supercharged Range Rovers. We had a day with the ML 63 AMG and here are our initial impressions.

It’s quick. 5.5 litres of carefully hand-built, twin-turbo Affalterbach tech gets you 550bhp and 77.4kgm of torque. It gets the ML 63’s 2.2 tonnes to 100kph in around five seconds, which is about as quick as the Cayenne Turbo. That, and the fact that the ML masks its speed really well, means you end up breaking speed limits without even trying, and mostly without knowing. Peak torque kicks in below 2,000rpm, and when it does, there’s one long, delicious, guttural bellow as you're hurtled to the horizon. It’s a seriously quick SUV and once in the higher gears, it can terrify you with its ferocious ability to close in on less-endowed traffic.

Urgent progress can be affected initially by hesitancy from the seven-speed torque-converter automatic gearbox, but the ‘Sport’ and ‘Manual’ transmission modes allow you to get sharper responses from the powertrain. What you need to be careful about after selecting the latter mode is that you shouldn’t allow the engine to run into its rev limiter, which cuts in aggressively at around 6,250rpm. Learn the motor’s quirks though, and you can cover ground quickly and devastatingly. You need expressway-sized roads to take full advantage of its performance, though.