Maruti Suzuki Swift vs Baleno vs Dzire vs Ignis 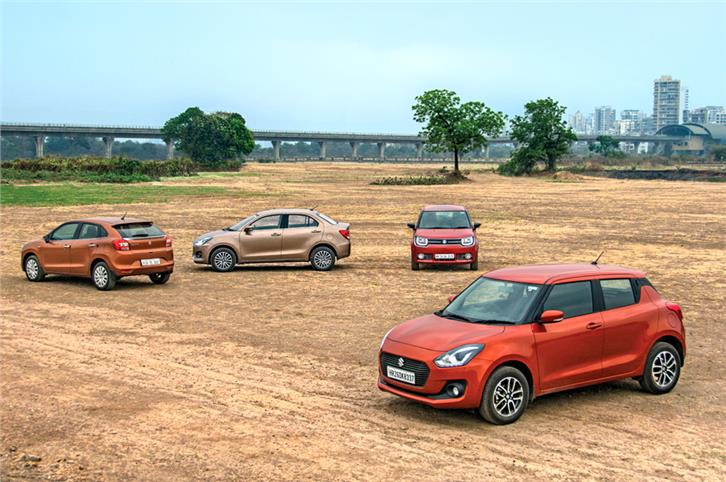 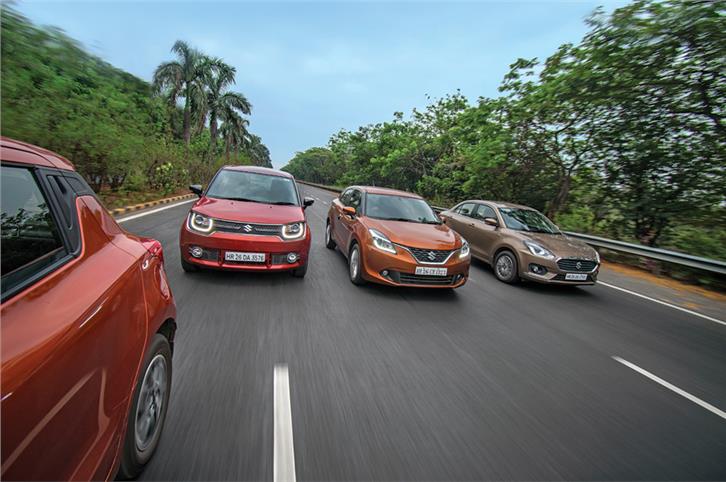 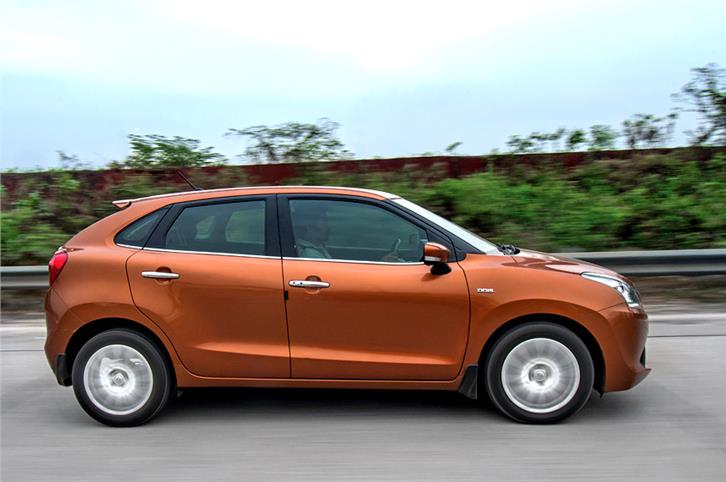 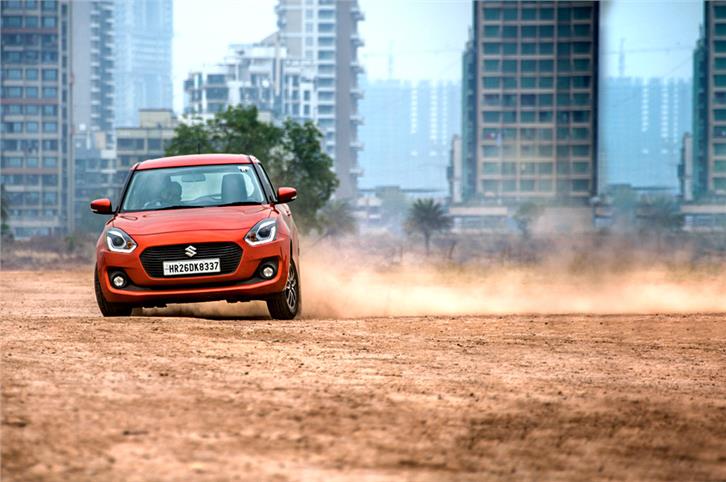 The Swift always had a very specific job in the Maruti range, but now with three siblings that do much of the same, Gavin D’Souza wonders why you’d still want one.

The Swift came along in 2005 and reset the way we perceived Maruti. Yes, the 800 was the car that put the company on the map, but the Swift was the car that India really fell in love with; taking those traditional Maruti values of affordability, reliability, and ease of use and marrying them to space, good looks and fun – qualities that were then somewhat new for the brand. And yes, though there were bigger, more expensive Marutis at the time – the Esteem, Baleno and the ill-fated, V6-powered Grand Vitara XL7 – the Swift was the one that clicked with Indians as the ‘premium’ Maruti. We loved it so much that, in the 13 years since, it has almost always been the second-best selling hatchback (after the Alto, of course) – not just in the Maruti range, but in the country!

Generation 1 was a firecracker to drive, while Generation 2 traded in some of that playfulness for a bit more maturity. But, when it came to Generation 3, things were a bit different. Not only did rivals step-up their game, but Maruti itself chose to expand its premium hatchback line-up with the Baleno (meant to be a more spacious, more premium offering) and the Ignis (meant to be a quirky, style-focused alternative for younger buyers). Wasn’t the Swift supposed to be both those things? And then there was the Gen 3 Dzire compact sedan which, for a change, launched before its hatch counterpart and finally grew out of the Swift’s shadow with far more space, practicality, and an identity of its own. All three cars came before the new Swift and have ever since worked their way into buyers’ hearts – even the relatively slow-selling Ignis. Moreover, all three cars are based on the same platform, with the same engines and many shared components, so they all drive almost exactly the same.

THIRD TIME’S A CHARM
So when we got our first crack at the ‘all-new’ Swift earlier this year, it didn’t really feel all that new, and the same excitement and anticipation that accompanied the first two cars was missing. Sure, it was spacious – but not the most spacious; well equipped – but not the best equipped; and funky – but arguably, not the funkiest. Then there was the way it drove, which was exactly the same as the rest. This has been a slightly sticky subject with this new generation of Marutis based on the company’s new Heartect platform. As you’ll undoubtedly have read in our extensive road test, while the Swift’s suspension is well-calibrated, the steering is woefully lifeless and just takes the fun out of the driving experience. So the last thing that made the Swift a Swift – engaging handling – isn’t there, anymore. So what sets it apart from its siblings?

Well, one glance at it and you won’t mistake it for anything other than a Swift, with its two-box shape, tapering glasshouse, angular headlamps, and floating roof. Some elements like the tail-lamps are less distinctive, and yes – there are some commonalities with the Dzire; but it looks every bit the sporty hatchback its predecessors were, albeit a little bit rounder and ‘softer’, now. That pillar-mounted rear door handle was an unexpected but welcome touch.

Happily, Maruti has done its bit to set the Swift apart on the inside too – if only just a little bit. The colour scheme is all black, as ever, and there are circular central AC vents, really nicely finished and unique rotary AC controls, and big hooded dials. But yet, things are all too familiar. The front seats are pretty much exactly the same as in the Baleno and Dzire, as is much of the switchgear. The similarity also extends to the equipment lists and, indeed, the prices of the model ranges of these four cars, which overlap quite heavily (see box). So just where does the Swift fit in all of this? For that, let’s look at the others.

PREMIUM PLUS
The Baleno exists because of the Hyundai i20. While in its previous generation, the i20 was competitive with the Swift of its time, the current iteration shifted the goalposts in terms of space, quality, and equipment. Maruti needed a bigger, better car than the Swift, and thus came the Baleno. Not everyone took to its looks, some finding it nice and understated, others thinking it to be a bit awkwardly proportioned with its emphasised cab-forward shape. What was in no doubt, however, was that it ticked all the necessary boxes to take on the i20. It packed an extensive equipment list, bumped the wheel size up to 16 inches and offered tremendous passenger and luggage room (more than even the previous Dzire) – all of which were unprecedented for a Maruti hatchback. And, while all the others have been given the cost-effective (but jerky) AMT automatic gearbox, the Baleno gets a smoother CVT in keeping with its premium positioning. But though it undercut the i20 on price, it still felt a bit pricey for a Maruti hatchback. On top of this, its light build and driving manners didn’t inspire the sort of confidence one would expect from a premium hatch.

MILLENNIAL MOBILE
The Baleno feels like a luxury limousine from behind the wheel, compared to the Ignis. With its relatively weedy 175-section tyres, the shortest wheelbase and the tallest height, the smallest and cheapest of this bunch does feel rather skittish and fidgety to drive, hopping around over small bumps and uneven patches. This is also compounded by its 180mm ground clearance – which is the highest here. On the flip side, that’s what people like about it – its pseudo-crossover charm. It looks like nothing else out there. It is certainly the boldest Maruti design of them all, what with its boxy, upright retro shape, the three ‘slashes’ on the thick C-pillar and ‘square-spoked’ wheels. Even the inside appears to have the most unique stuff, with loads of colour-coded retro touches, like the cylindrical AC console and colour-coded door handles. And that grille with the big LED headlamps – it’s just so incredibly wacky. Perhaps a bit too wacky for Maruti customers, if sales numbers are anything to go by though, as it is easily the least popular of this bunch.

ALL GROWN UP
It’s no coincidence that the Dzire has dropped the Swift name. For the first time, it feels like its own car and not just a lazy derivative of the Swift. They’ve extracted as much space as possible from the 3,995mm length, largely in width, to give it a rear seat and boot space that – though not class-leading – are really impressive. It gets its own distinct nose and the proportions overall are really good. On the inside too, the beige upholstery, faux wood (love it or hate it), and unique dials and centre console do more to set it apart. Fittingly, it’s the only one here with a rear AC vent. It really has the chops to be a proper family car, this time around. It is, however, the most expensive of this bunch, and though the margin isn’t too big, the Baleno does get you more equipment for less money. Though all the cars here suffer from that disconcertingly numb steering feel that can actually be dangerous on the move, the Dzire seems to have it the worst.

HEAD VERSUS HEARTECT
The thing is, if you lined these cars up in a game of trumps, there is not a single area where the Swift comes out on top. The Baleno has the best equipment spec, the better automatic gearbox, and the biggest wheels and tyres, whereas the Dzire has the most passenger and boot space, and the most variants to choose from. Heck – even the Ignis scores for having the highest ground clearance and lowest price. The Swift is just in the middle, somewhere. So on paper, there’s no reason to choose it. At this point you’re probably expecting me to turn around and say that because it does a little bit of everything, it’s the jack of all trades, so it’s the one to pick. Well, no. These cars are so similar to one another on ability that picking the Swift would have to be a subjective decision. You’d have to really want that classic Swift look and the sporty Swift interior to choose this, because rationality would lead you to one of the other three. Personally, I’d have the Baleno because I have no need for the boot of the Dzire or the ground clearance of the Ignis. Plus, the Dzire’s cream interior gets dirty far too easily, and I’d like a bit more room than the Ignis offers. The Swift didn’t even feature among my choices. We’ll have to wait and see how it pans out once the initial hype has died down, chances are that brand strength and nostalgia alone will help it sell well. But, overall, the new Swift doesn’t feel quite as unique, special or convincing as it previously always did. Its capable new siblings are sure to cannibalise it, at least a bit.