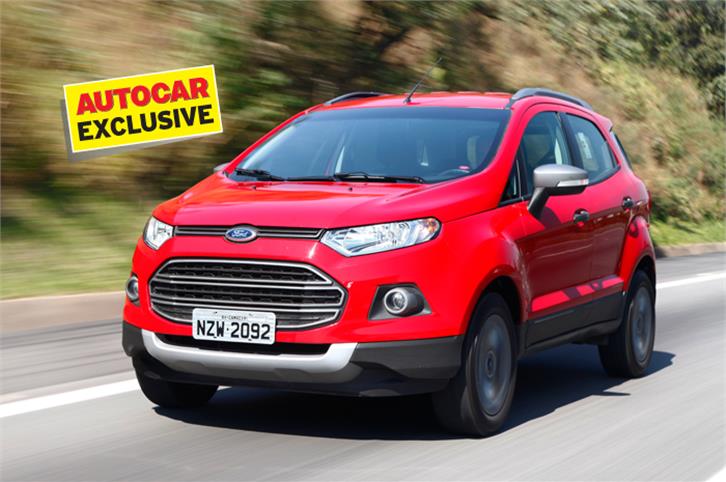 We’re very late. The sun has already come up, our Brazilian journalist colleagues are running late, and then once away, we land slap-bang in the middle of Sao Paulo’s mid-morning stampede. They said it would be bad, but this is ridiculous. The gridlock on the Ayrton Senna freeway is so intense, so tight and so unending, it makes rush hour in Bangalore feel like a breeze. An hour and a half later, still on the elevated freeway, still on the way out of the city and still in the jam, I’m casually informed that our destination is around 130km away!

Then, finally, salvation. A couple of speed breakers, a toll plaza, and beyond it open roads. It’s a sight for sore eyes alright – perfectly paved elevated road, perfectly marked wide lanes, long sweeping corners and gently banked sections, all rolled nicely into the mix. Time to loosen the reins on the 1.6-litre motor and see what the EcoSport is really like. First impressions are quite good. There’s enough torque in the mid-range to get the relatively light 1243kg EcoSport moving quite effortlessly, the speedo needle climbs past 110kph easily and speed continues to build as
I keep my foot down, the motor pulling hard quite happily. The road ahead is empty, so soon the speedo is up to 140 and climbing.
Then, out of the blue, an 18-wheeler decides to change lanes on a whim. I feel right at home; must be an Indian trucker. I get sharply on the brakes in a straight line, bleed a lot of speed and steer smoothly into the next lane. The Ford executes the change of track without a hiccup. Yes, I know this car’s based on the Fiesta and that automatically means good driving manners, but this is something else. The rest of the expressway is traversed without incident, the Ford holding on to high speeds as easily as a low-slung saloon. Wind noise is well contained, the roar from the tyres is pretty subdued, despite the big lugs in the rubber, and the kilometres just fly. Soon we are at our exit. Time for some smaller roads and some corners.
As luck would have it, the road is a dream. Strung between sections of low-lying hillocks, it dips and rises, has both tight sections and free-flowing corners, and seems just perfect. I start slow; this is an SUV after all and there will be some amount of body roll. Ten minutes into said road, however, I’m left scratching my head. Sure I’m going easy, but the EcoSport just doesn’t roll like something with its belly floating 200mm above the tarmac should. As on the Fiesta, the steering is both light and feelsome, I love the fact that there is zero slack and this, together with the good body control and beautifully weighted brakes, makes this car an absolute joy to drive, even at a slightly relaxed pace. The light but very accurate gearbox is super slick, it’s a pleasure to use and the best bit is that it doesn’t mind being hurried too much either.
Inevitably the pace increases. I use more of the 115bhp on offer and carry more speed into corners. But even though I’m pushing the EcoSport much harder, there’s still no loss of composure, not much body roll and not too much dive from the suspension. And the message from the steering wheel is clear: ‘there’s plenty more grip, please push on’. And I do. The front tyres are now scrambling for grip on the way into corners, the EcoSport skating mildly over the road. And though there’s a bit of roll and yaw on the way out, the steering keeps chattering, giving me confidence all the time. It just feels special.
Eventually we get to a place where we can shoot. Time to stop, pull out the cameras and admire the car; give that just-rolled-out-of-the-motor-show look a once-over. And is there any doubt that, in the flesh, out in the  real world, Ford’s EcoSport looks just insane? We’re used to seeing outlandish and futuristic designs under the arc lights at car shows, and in that setting they don’t stand out as much. But seeing the EcoSport on the road, barely altered from the concept car revealed at the Auto Expo less than a year ago, comes as something of a shock.