The updated Audi A8 gets more tech, subtle cosmetic changes and a bit more power. Here's what it feels like from behind the wheel. 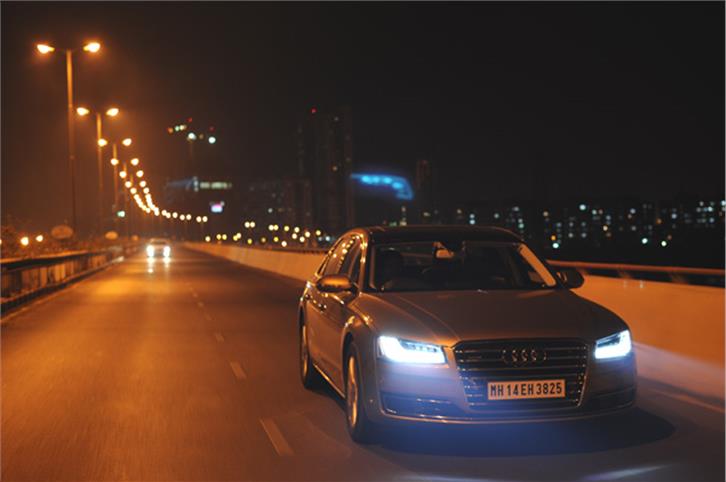 Make : Audi
Model : A8 L
You are looking at the facelifted Audi A8.The optional headlamps on the A8 are the most significant part of the facelift. Twenty five individual LEDs that can be switched on and off independently make up the headlamps in the facelifted Audi A8. What they can do, among many things, is blank off individual LEDs that are shining in the face of the driver of an oncoming vehicle while continuing to light up the rest of the road with full beam. It works via the information it gets from an on-board camera and this is proper sci-fi stuff.

Peer at the car a bit more and you'll pick out typically understated German styling tweaks. There's a new bonnet featuring more defined creases, a lightly reworked grille, a less-rounded front bumper and flatter headlights. At the rear, the aluminium-bodied A8 gets a new boot lid, new tail-lamps and a crisper bumper with trapezoidal exhaust tips.

Our test car has the 3.0-litre TDI V6 that makes 254bhp and 59.14kgm of torque – gains of 8bhp and 3kgm of torque over the pre-facelift car. It's a bump up that's not terribly obvious because the 'old' engine was quite accomplished itself. Push the engine start button and the car settles into a smooth, if slightly audible idle. On the move, the A8's engine becomes incredibly refined and quiet – it's hard to tell there's a reasonably big diesel under the hood, and even when you rev it, the loudest noise you'll hear is a cultured purr.