The updated luxury flagship limo gets more chrome and some new tech, but is it more appealing now? 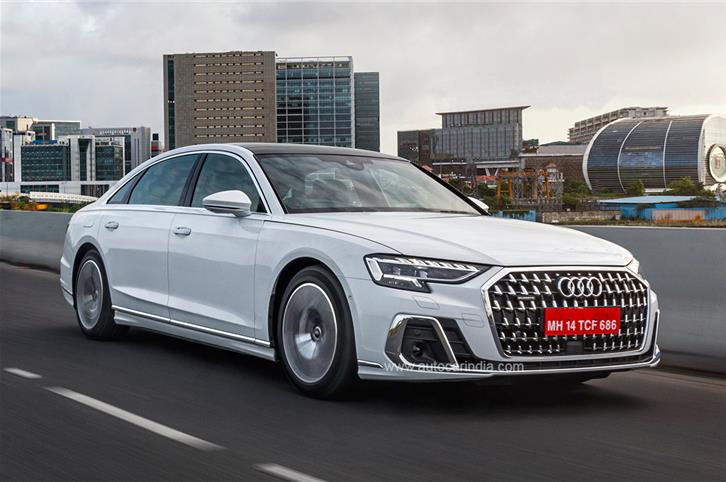 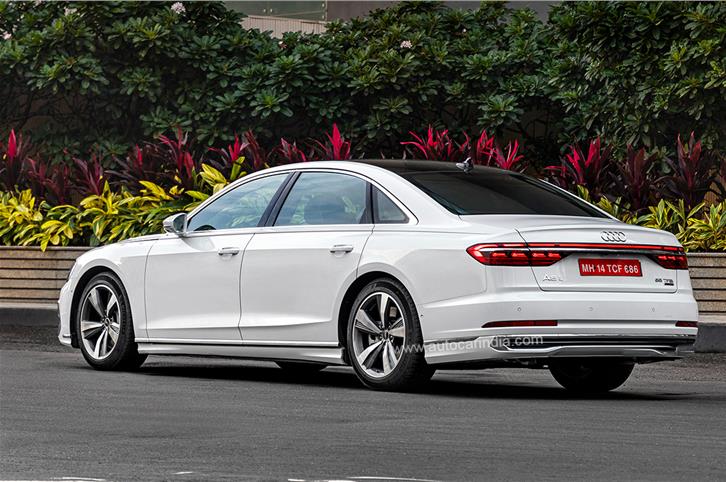 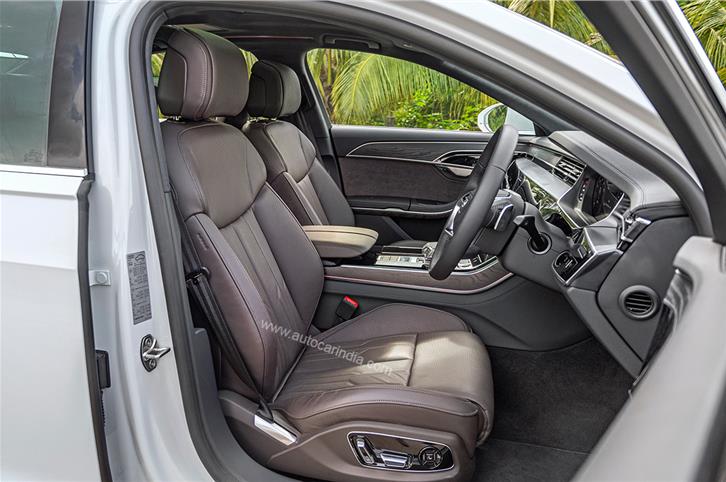 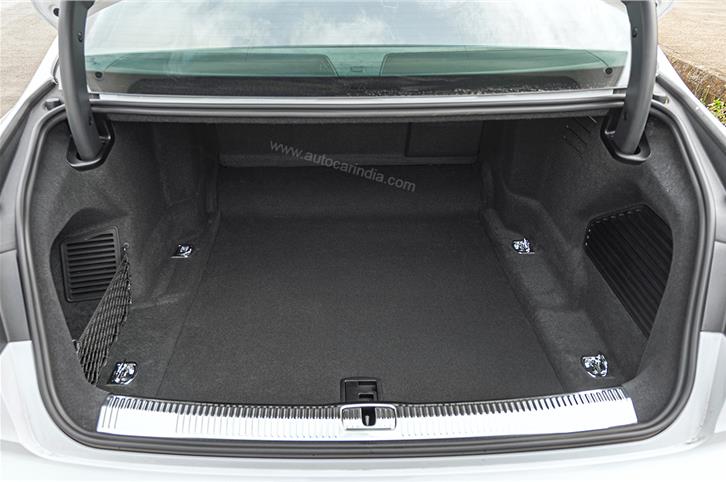 A flashy Audi is almost an oxymoron, more so when it comes to the A8L which is the brand's flagship sedan, and one that has advocated subtlety through all of its generations. However, now, in 2022, where the Mercedes-Benz S Class has upped its game inside and out, and the new BMW 7 Series has just undergone a set of radical design changes, Audi couldn't just sit back and relax. This A8L is only an update and not an all-new model, but this time it relies far more heavily on chrome, its cutting edge lighting and some more tech underneath to really wow you. But is it going to be enough?

On the outside, Audi has been bold with the use of chrome on the massive grille. Look closer, however, and the chrome studs on the grille have more of a rounded look, which is a different approach from Audi’s usual treatment of sharp and edgy. There is more chrome below the grille, spanning the width of the chin and surrounding the air intakes, giving it better presence and an imposing front end. And how could you not talk about the headlamps of an Audi – the redesigned adaptive LED units have enough tech to impress Nambi Narayanan. But then again, it had to be since they are a Rs 10 lakh optional extra. 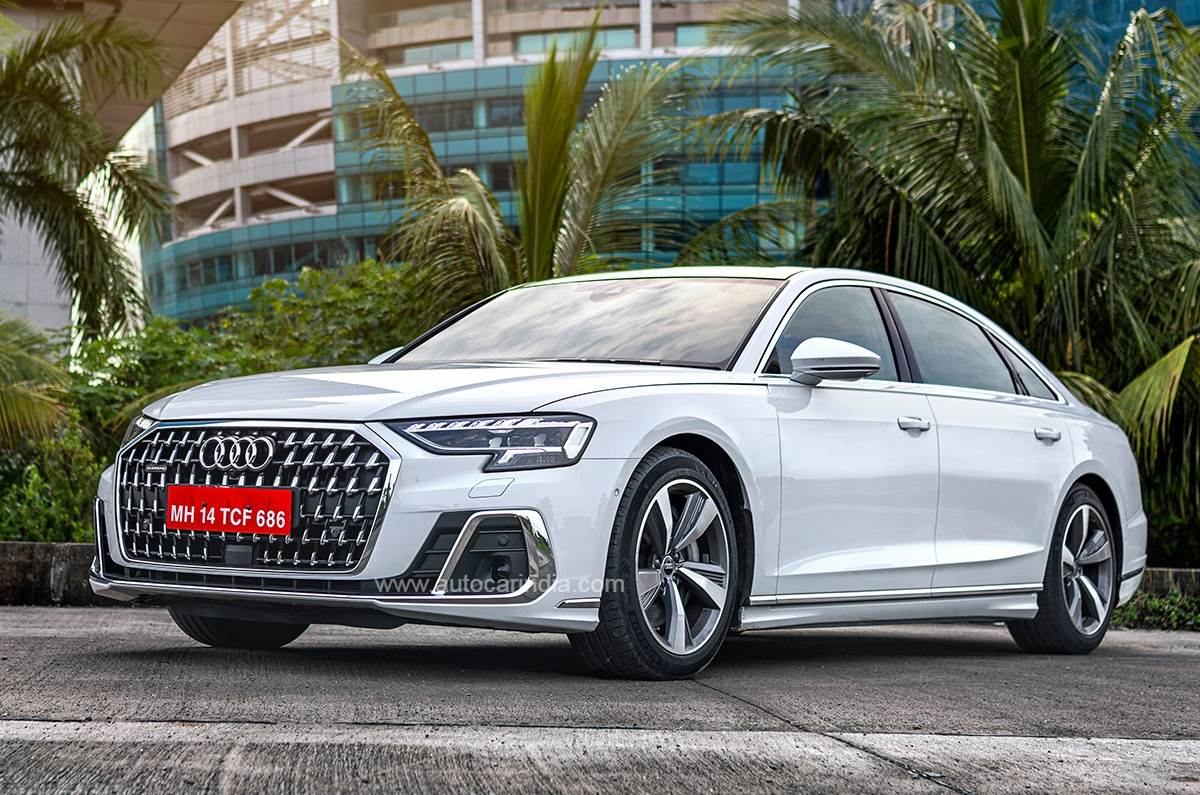 Front is laden with chrome accents

The ‘digital’ Matrix headlamps are not only fantastic in terms of illumination, but also equipped with clever features. Each headlight has approximately 1.3 million micromirrors that break down the light into tiny pixels, and there’s also ‘orientation light’, which basically acts as a carpet of light in your lane that is brighter and better illuminated. The headlights also adjust the LEDs on detecting oncoming traffic, to prevent the light beams from blinding drivers. It is all superbly clever and very seamlessly integrated. And, of course, if you want to show off a bit, there are multiple dynamic coming home/leaving home visual tricks that are sure to bring out a few “ooohs” from your friends.

Over to the side, the dimensions are untouched, so it gets a familiar silhouette with the distinctive and strong shoulder line. However, strips of chrome have been added here too, running the entire length of the car. The 19-inch alloy wheels don’t look small, but their design is a bit too simple and safe; something bolder would have given the A8 some much needed flair. 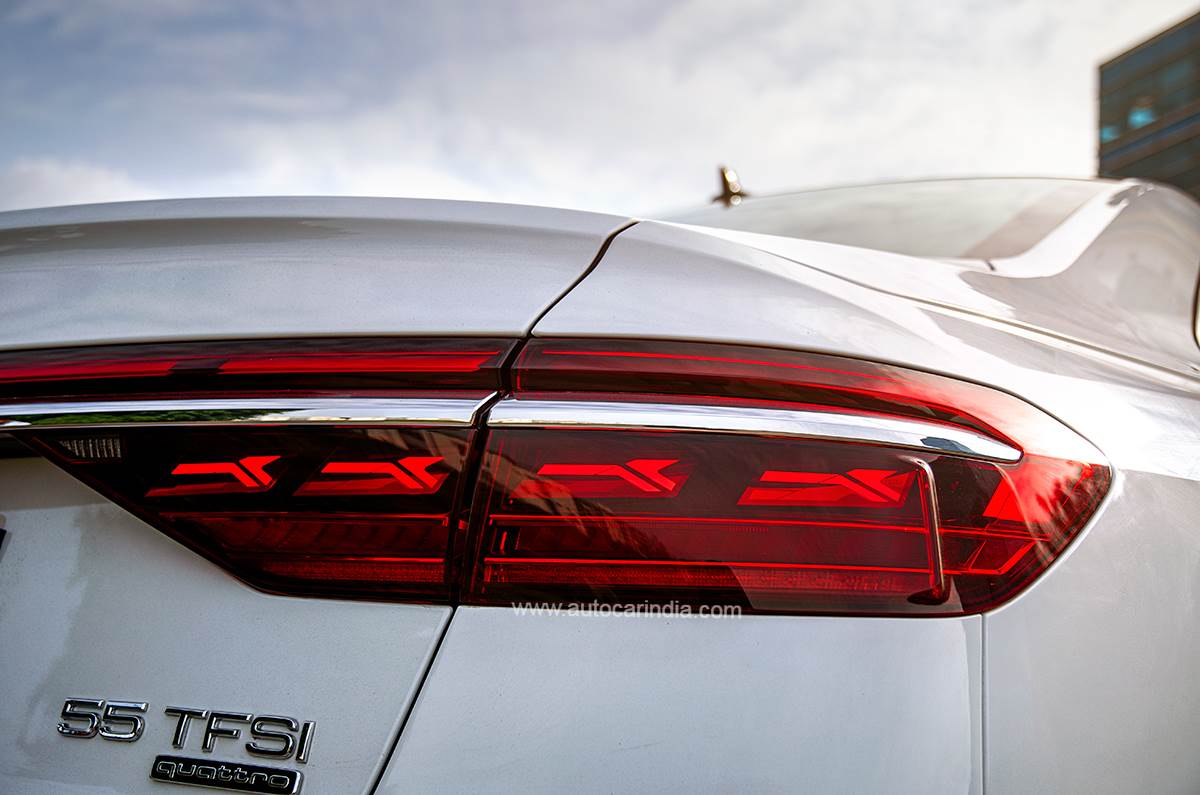 OLED MATRIX taillamps can modify details in the lights

At the rear, the updated A8L gets digital OLED tail-lamps that are equipped with a proximity sensor, so that if other road users come within two metres of the rear end of a stationary A8, all of the OLED segments are activated automatically. And they also change their internal graphical pattern when switched to Dynamic mode; pretty clever stuff.

Inside, it is a quintessential Audi with a minimalist design. However, at the front, thanks to Audi’s homogenous interior design across its newer range, you’d struggle to find anything that separates this from an A6. Yes, the panel of slim AC vents that motor open is unique to the A8, but the dual-screen set-up, virtual cockpit digital dials, centre console switchgear and general layout seem to be the same, which, if you are paying over double the price, is rather underwhelming. That said, Audi has a vast spread of customisation options on offer that allows you to play around and make a specific style suited to your choice. This ensures that no two A8Ls are alike, and that's important. 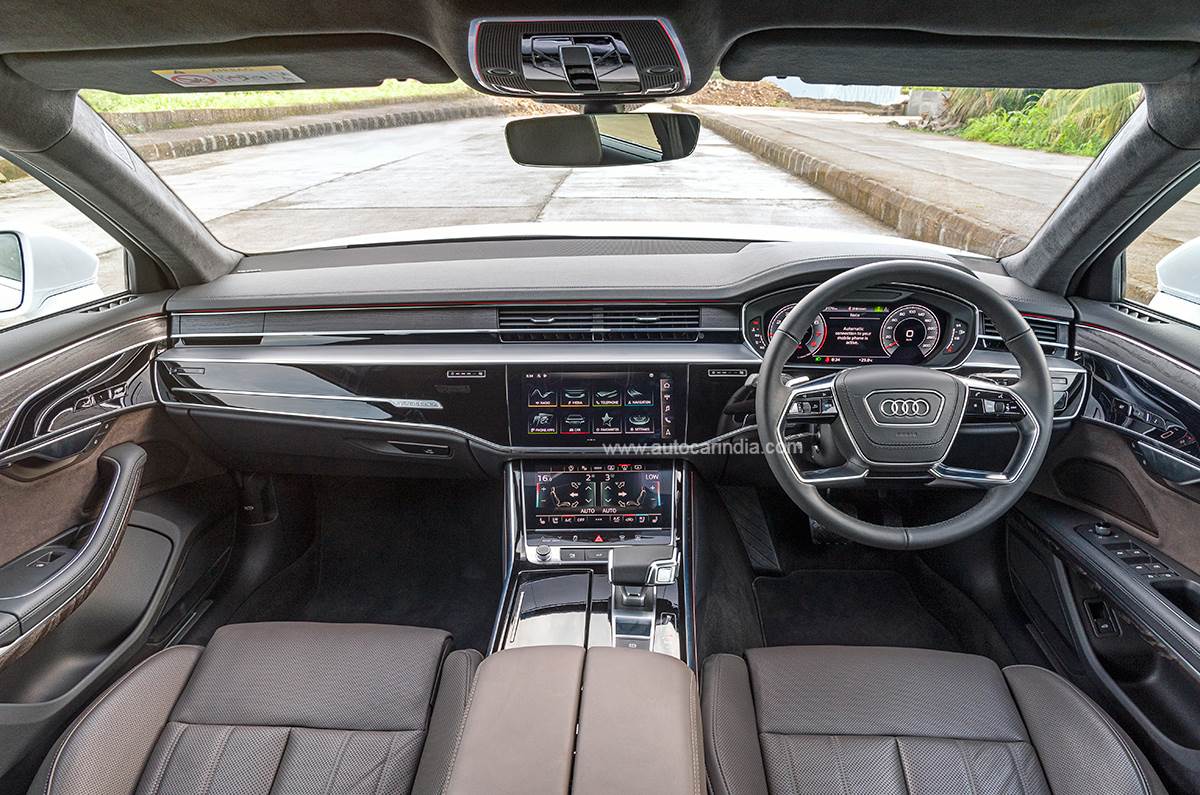 Personal customisation can make it stand out

However, like every other luxury limousine, it is in the rear that the A8L truly shines. With a wheelbase over three metres long, space is in abundance. But should you want more room to stretch out, opt for the relaxation package that transforms the boss seat (the seat behind the front passenger seat) into one of the most comfortable places you’d ever sit. At the press of a button (which, annoyingly, you have to hold down through the entire process) the front seat moves all the way ahead, tucks in the back rest for added space, tilts the rear entertainment screen to an optimum angle and lowers the footrest as well. Get comfy here and it would take some convincing for you to get out of it.

Massaging options are available not only in the seats, but also in a panel in the back of that front passenger seat, for the ‘boss’ to get a foot massage; a proper luxury experience. There is a tablet in the centre console that acts as a control panel for the sun blinds, music and infotainment, cabin lights and a lot more. The rear screens can also be connected to WiFi and stream Netflix, among other features. 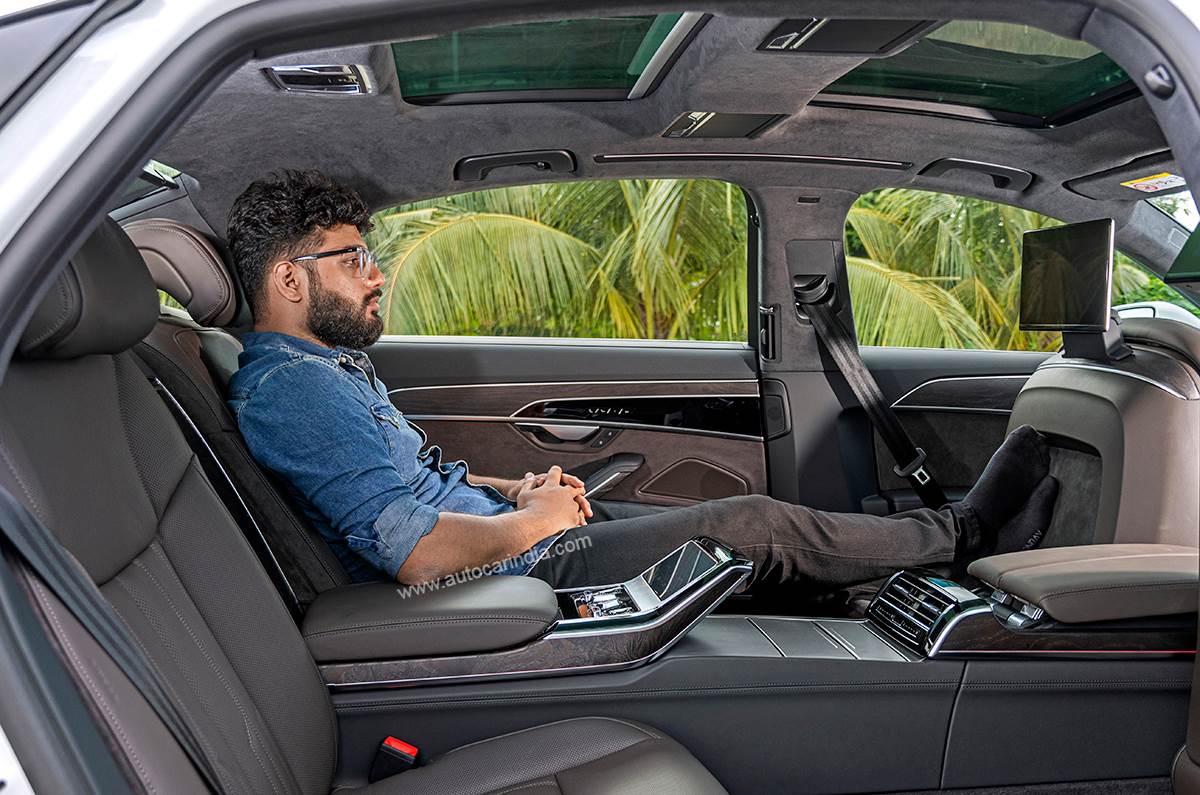 This is the seat for which you will buy the whole car, so the experience must get you your money’s worth; and it does. Imagine lounging in the back seat, stretched out with your feet and back being gently massaged, blinds cocooning you from the chaos outside, a 17-speaker Bang and Olufsen audio system (a 23-speaker set-up is optional) playing some smooth jazz, ambient lighting bathing the cabin in hues of purple, and should you opt for a mini fridge behind the centre armrest, having a chilled bottle of champagne. That’s quite the ride back home from work.

After that description, it is safe to assume that the driver's seat will seldom be used by this car’s owner. However, on the rare day you fancy a drive, you won't really miss your chauffeur. Under the long bonnet is the sole offering of a 3.0-litre V6 turbo-petrol engine with 340hp and 500Nm that is mated to an 8-speed automatic gearbox. 0-100kph is probably the most useless statistic here for this car, but the fact that it takes only 5.7sec means the engine does have some serious poke to it. Hauling this much car that quick is impressive, and from behind the wheel you do feel the surge. It is linear, but the gearbox is a tad too lenient. In Dynamic, the experience is a bit more aggressive, but at no point does the car shrink around you or feel agile. It handles well thanks to the adaptive air suspension, and the optional rear-wheel steering, but understandably, there isn’t much in terms of driver engagement. That said, the rear-wheel steering is an option worth ticking; It does make a big difference in day to day driving and your chauffeur would appreciate it. What is a bit strange is the lack of any ADAS features, especially since Audi does offer it in other markets, and the A8L is a CBU import. 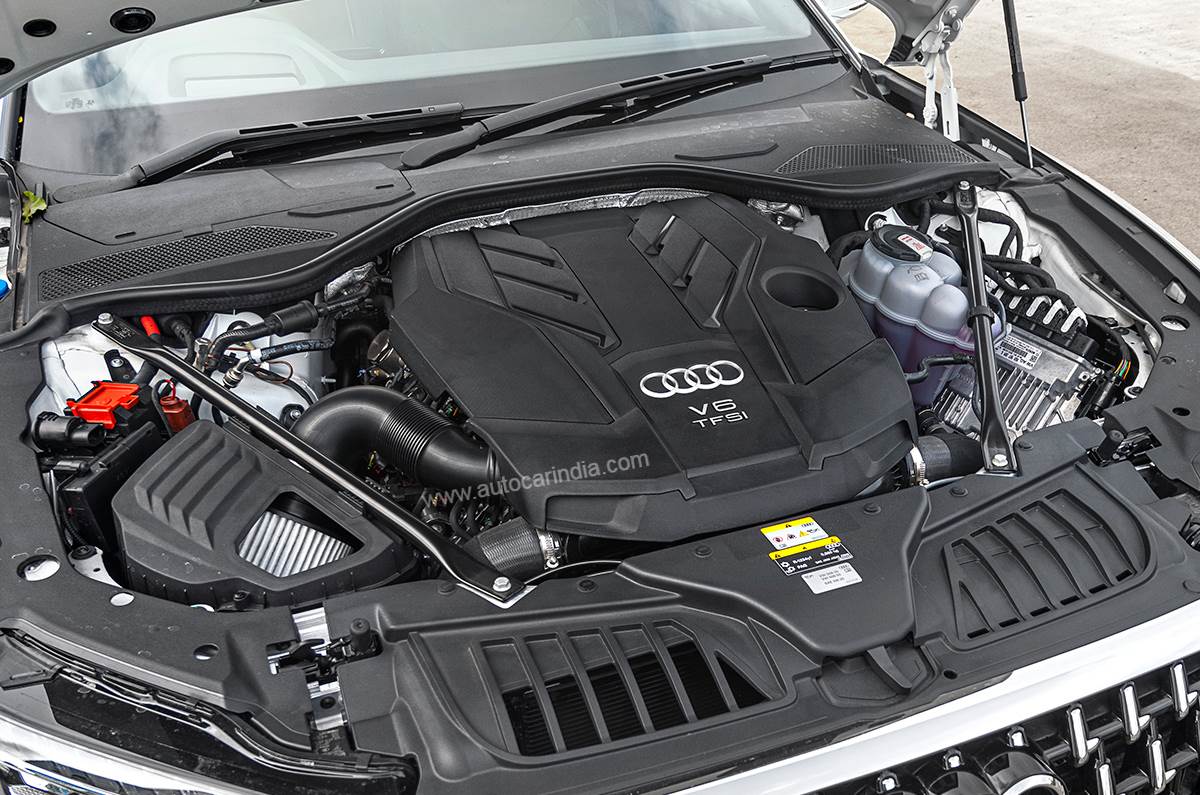 3.0-litre V6 is creamy smooth and packs a punch as well

The standard ride height of the A8L on its air suspension (in conjunction with that long wheelbase) is just too low for our road conditions, and each speed bump has to be crossed with patience. Yes, the ride height can be raised but the process is tedious. One has to go into the ‘Drive Mode’ selection screen on the touchscreen, because that’s where the function is located, and there’s no physical shortcut button. 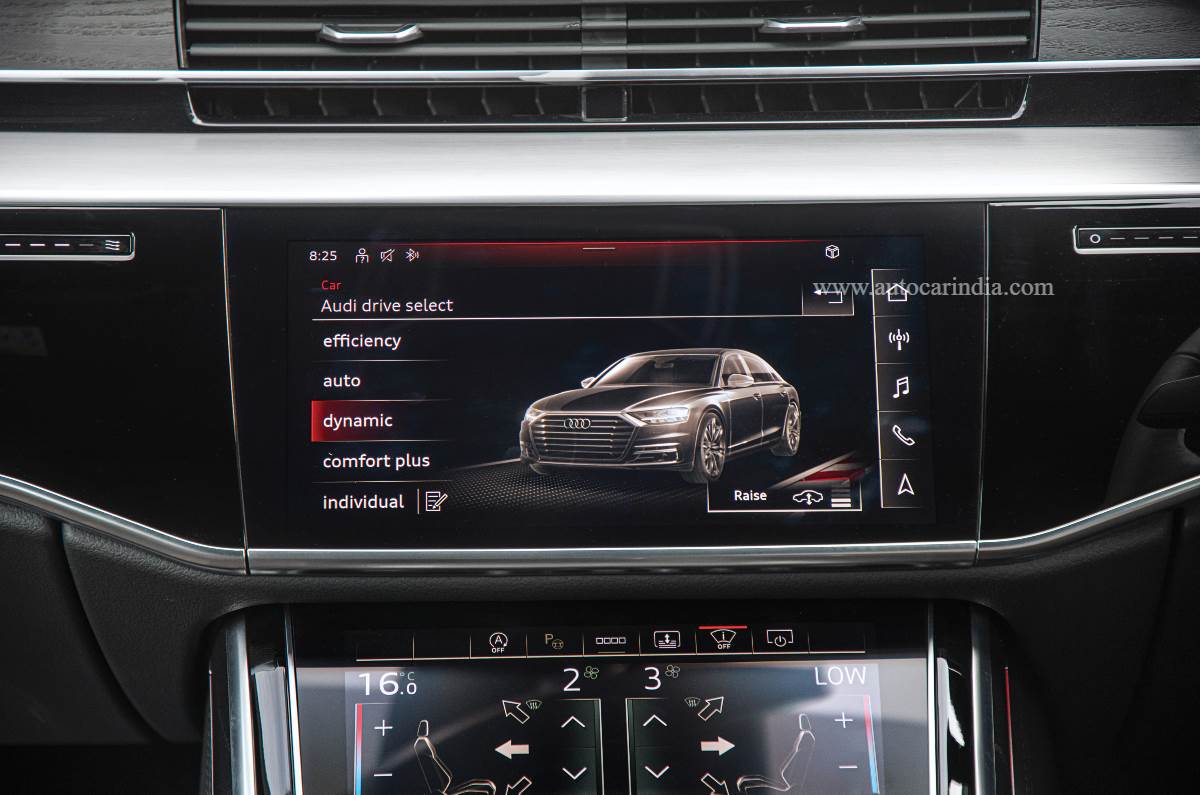 That aside, the facelift has added a new dimension to the air suspension’s functionality. You now get an optional ‘Predictive Active Suspension’ package that, just like the headlamps, comes at a price – Rs 15 lakh to be precise. In auto mode, the predictive suspension scans the road ahead with a camera, and processes the image in real time, altering the suspension accordingly. The active suspension can lift or lower the body by up to 85 millimetres from its central position at all four corners within five-tenths of a second; that’s rather quick! However, larger speed bumps tend to require the full suspension lift height, so your chauffeur will have to do that manually. Moreover, as soon as the speed crosses 40kph, the car lowers back down, and you need to be wary of the road ahead. 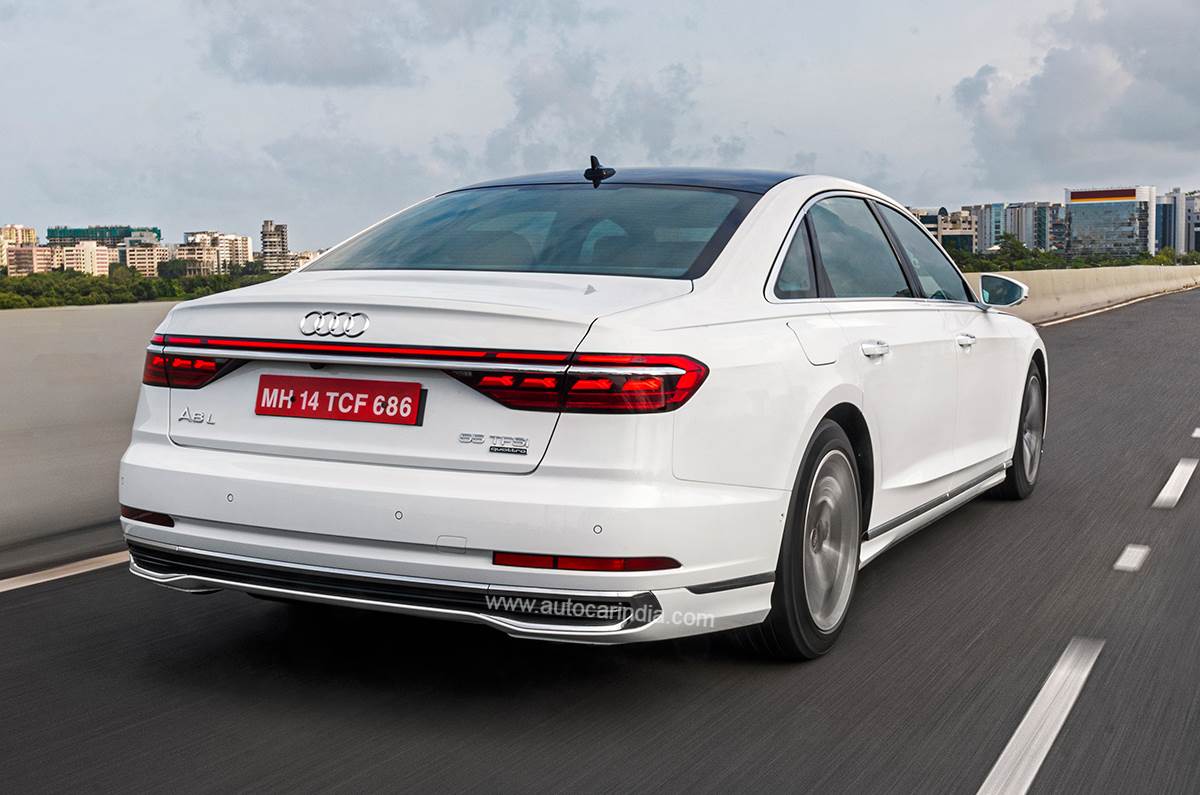 The A8L rides too low for Indian road conditions

That, however, is the only speed bump in the A8L’s ride quality, pun intended. In fact, a neat trick that comes with the predictive suspension option is that once you open the door the car automatically rises up swiftly to help with egress and ingress.

And then there is the level of comfort, which is just incredible. The car remains flat and composed through changes in elevation or camber of the road, and stability at high speeds is excellent. The adaptive suspension cushions you from the undulations and cracks in the roads without feeling too floaty or stiff, and all the high-tech witchcraft is worth the extra cost of that option. 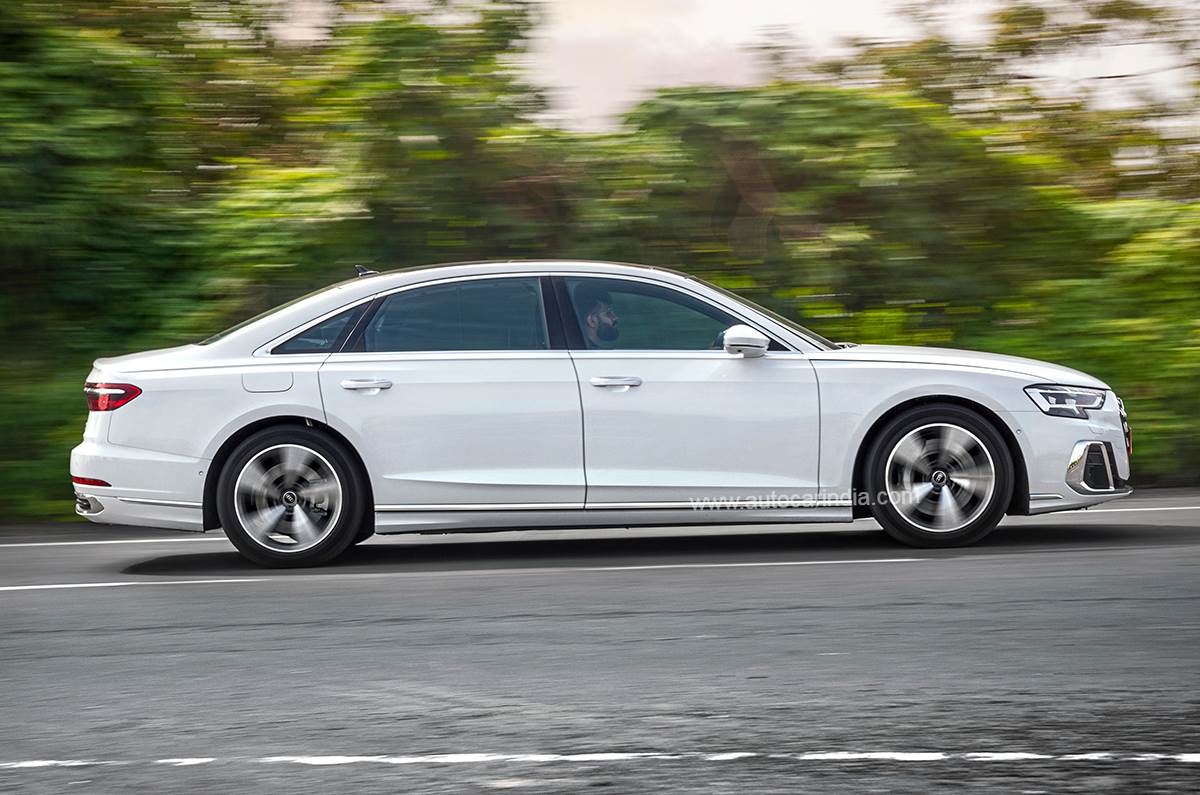 The updated A8L is available in two trims. A ‘Celebration Edition’ that is priced at Rs 1.29 crore (ex-showroom) that gets less kit, and comes with a five-seat layout, and the top-spec ‘Technology’ trim priced at Rs 1.57 crore, before you start speccing it up. Incidentally, the top-spec variant matches the locally assembled S-Class in price despite it being a CBU import. 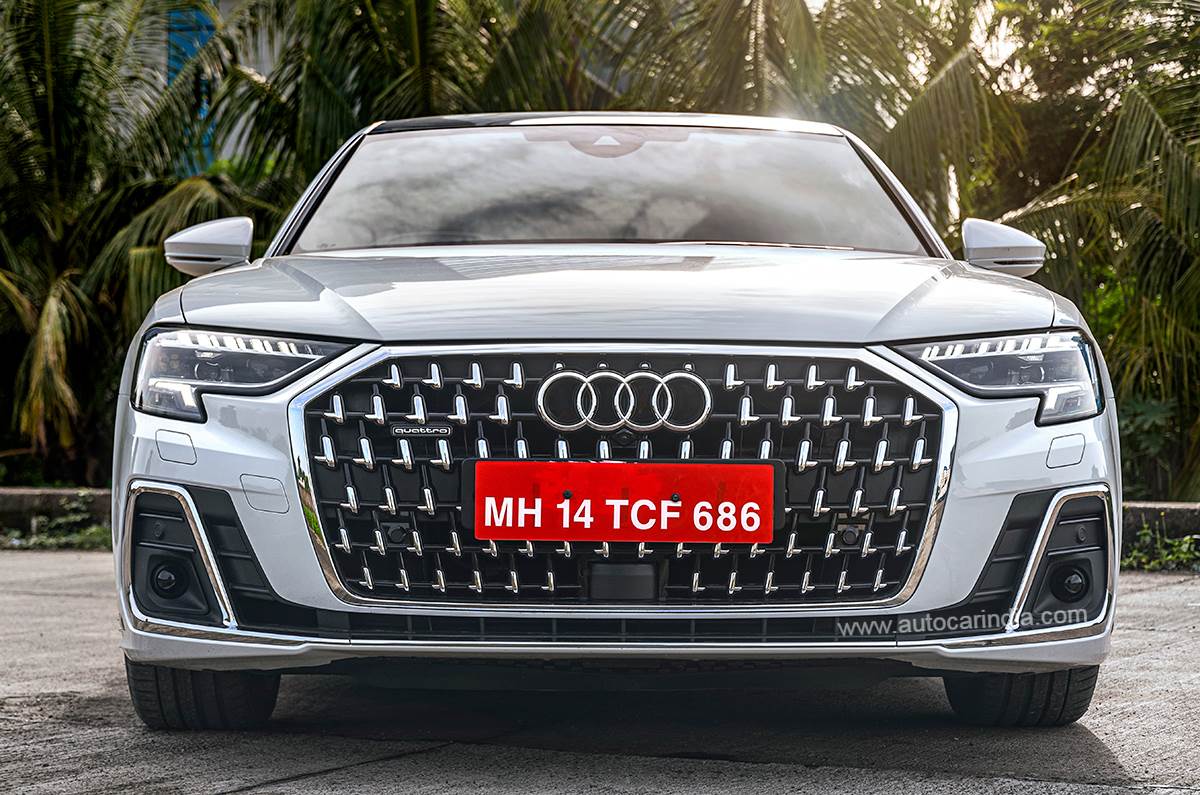 So, have the updates actually updated the A8L? Not in a huge way, but that’s just fine. After all, it’s just a facelift and not a generational change, but it always had the basics in place, and that hasn’t changed. The rear seat comfort is all but flawless, you have all the features you’d want back there (the foot massage is something really unique), the ride is superb, the build of the cabin is just stellar, and the design, now thanks to the chrome treatment, has that typical big, expensive-car look. Sure, it might not have the wow factor of the S-Class’s cabin, and yes, there will be some even in this segment who would have liked a diesel engine, but apart from that, the A8L has a lot to flaunt. What sets it apart is that it has its own distinct identity – one of high tech and modernity – which has only been enhanced after the facelift.