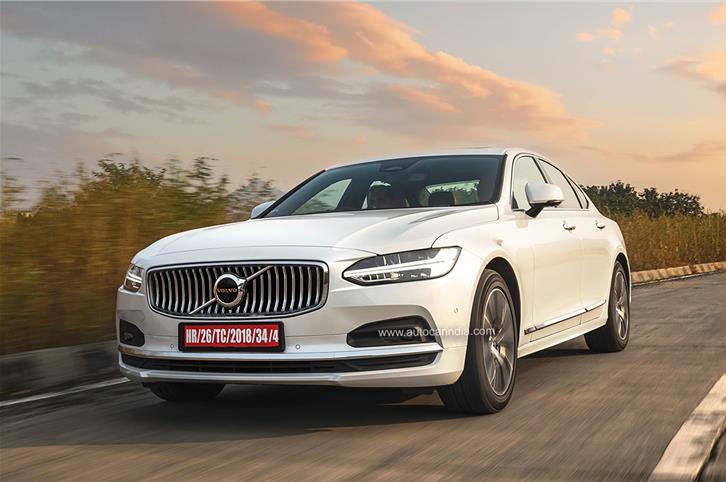 Volvo, the Swedish luxury brand behind the ‘Ironmark’. Famous for building amongst the safest cars in the world. Cars that have a strong focus on comfort, luxury and clean cut design. And this here is the new, updated S90 sedan, Volvo’s Mercedes E-Class and Audi A6 rival and currently its largest car. 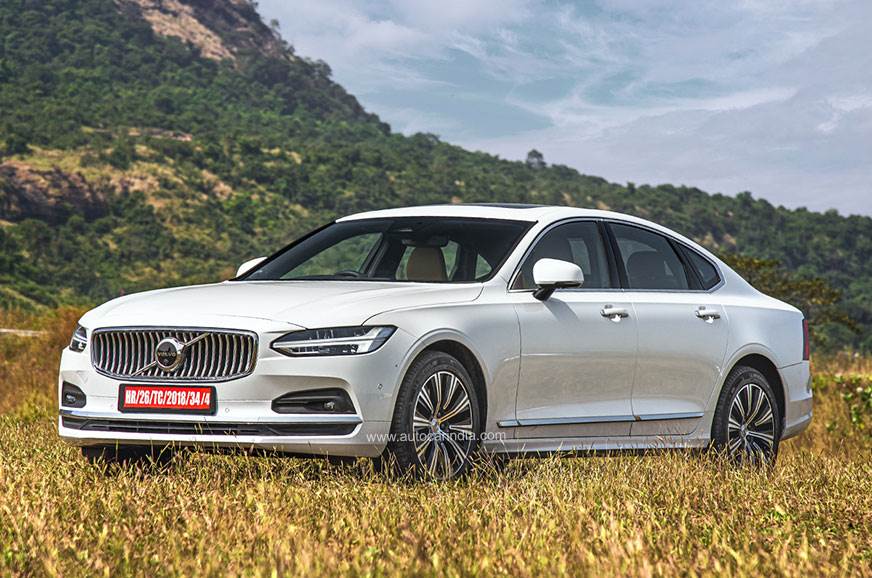 Now, many of you, looking at these images, may ask ‘what’s new’? And you would be right. This car looks all but identical to the outgoing one. Compare the earlier car and this one back to back, however, and you can tell the difference. The biggest change is to the chin of the car. Whereas the earlier car had myriad surfaces and cuts and creases, this one is both simpler and cleaner. Apart from these small changes, the S90 remains faithful to the original. Long in beam, and built on a long wheelbase, with an elongated bonnet, a pushed back cabin and square shoulders, the S90 has a regal air to it. And this is true around the rear as well, where the ‘squared off’ boot and C-shaped tail-lights also look distinctive. There are minor changes at the rear, but these are even more difficult to identify and only exist at the very bottom. A sure-fire way to tell the two S90s apart, however, is that the previous generation gets a rectangular exhaust that’s altogether missing on this new petrol car.

What is new is what’s under the hood – Volvo’s 2.0-litre turbo-petrol, which puts out an electrically assisted 250hp. There’s no diesel in the range now but the petrol is a mild-hybrid, and the four-cylinder engine is assisted by a 48V electrical system that recuperates electrical energy lost while braking and puts it back to the wheels as and when it can. 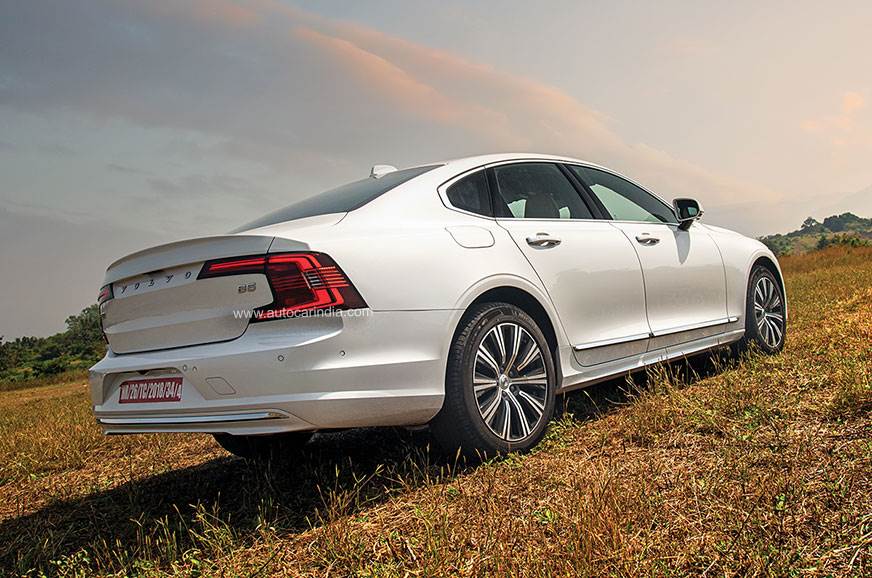 Under the skin, the S90 is based on Volvo’s Scalable Platform Architecture, just like the S60, and XC60 and XC90 SUVs. Interestingly, it is the only luxury car of this size to feature a transversely mounted engine up front. The rest all have longitudinally mounted engines and are predominantly rear-wheel driven. Volvo says a transversely mounted engine is safer in a crash but having a single platform for its range of large cars also helps simplify things massively. As earlier, the car gets air suspension in the rear and a whole host of Volvo safety systems and driver aids. Among them is radar-based City Safety that keeps a lookout for you and brakes if necessary. City Safety can identify other vehicles, pedestrians, cyclists and large animals ahead of you, even at night. Oncoming Mitigation – another world’s first in safety systems by Volvo – detects other vehicles driving towards you and can brake automatically to help lessen the severity of the impact. The S90 will even proactively support your evasive manoeuvres by using the ESP or individual wheel braking to steer you out of trouble (in accordance with your steering angle) and there’s even runoff mitigation that prevents you from ‘drifting’ off the road when you are not paying attention.

The updated B420T2 petrol engine suits the S90’s overall relaxed character to a T. It starts smoothly, with no loud starter whirr and remains unobtrusive and in the background at slower speeds. Then, because it responds smartly to a tap on the throttle, it also feels energetic and always on the ball. In fact, the S90 moves forward so effortlessly, assisted by the 10kW max boost from the 48V electric system, whatever turbo lag there is gets easily masked. This makes it particularly good in city traffic where you want your car to respond as soon as you tap the throttle. Yes, at times, the S90 feels a bit too reactive at slow speed, especially when electrical assistance overlaps with turbo boost, and this requires a bit of throttle modulation. But this, thankfully, is not something you have to contend with on a regular basis. 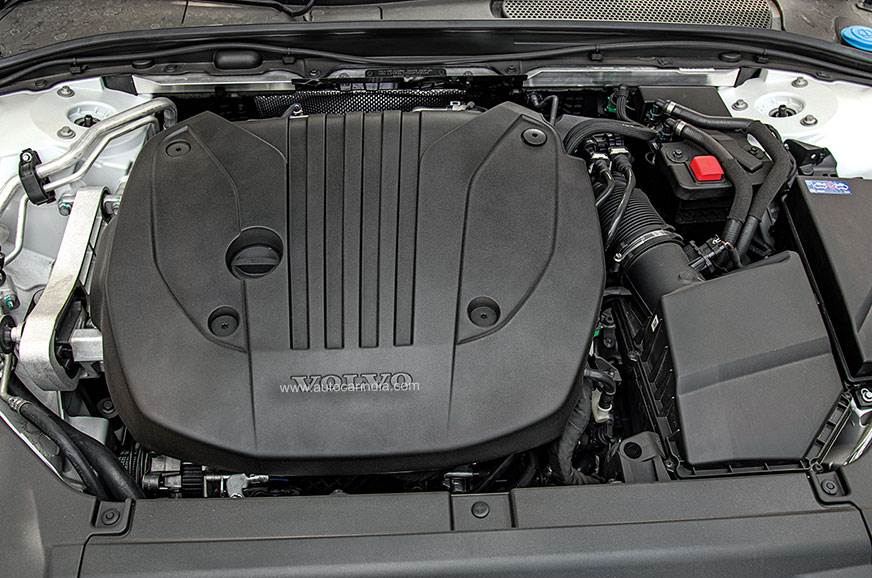 What also makes it light and easy to drive in the city is that the steering is oily smooth and needs very little effort, the S90 feels agile at low speeds and turns on a dime. The accelerator and brake pedals are light and beautifully set up and sprung, so they make driving the S90 extremely relaxing.

The ramp up in power isn’t very strong, however. In fact, it feels so smooth and linear that this doesn’t feel like a 250hp engine. Put your foot down after the initial burst of power and it merely gathers speed in an urgent manner, rather than accelerate strongly. Performance does build further up the powerband, and by 5,000rpm, the engine is pulling pretty hard. Keep the engine spinning at around this speed and the S90 does get a move on. It feels a bit noisy and strained at higher engine speeds, but the performance is much stronger now. Volvo says the S90 takes 6.9sec to do 0-100kph and in the interest of safety, as on all Volvos, top speed is limited to 180kph.

The 8-speed gearbox is improved as well. While earlier it felt a bit hesitant and reticent, this one is improved. It’s nowhere near as intuitive or as quick as some of the best gearboxes around, but most of the hiccups we experienced on earlier versions have been ironed out quite nicely.

What I do miss are paddle shifters behind the steering wheel . . .  shifting gears manually isn’t always about extracting maximum performance. Often it’s more about getting better control of the car, and that’s when paddle shifters are such a joy to use. You can take manual control of the gearbox, but to do this you need to slot the gear lever into manual mode and then you can push left to downshift and right to upshift; not nice. The system is fiddly to use and that’s probably why Mercedes dropped it or evolved to something nicer to use or more intuitive.

Also something that takes some getting used to is the gear selector. While the crystal top looks fantastic, functionality isn’t great. You can’t just pull the lever back and select Drive. Here you need two individual tugs – one to go from Park to Neutral and then another to go from Neutral to Drive. Three-point turns, as you can imagine, are particularly galling if you are not used to this. 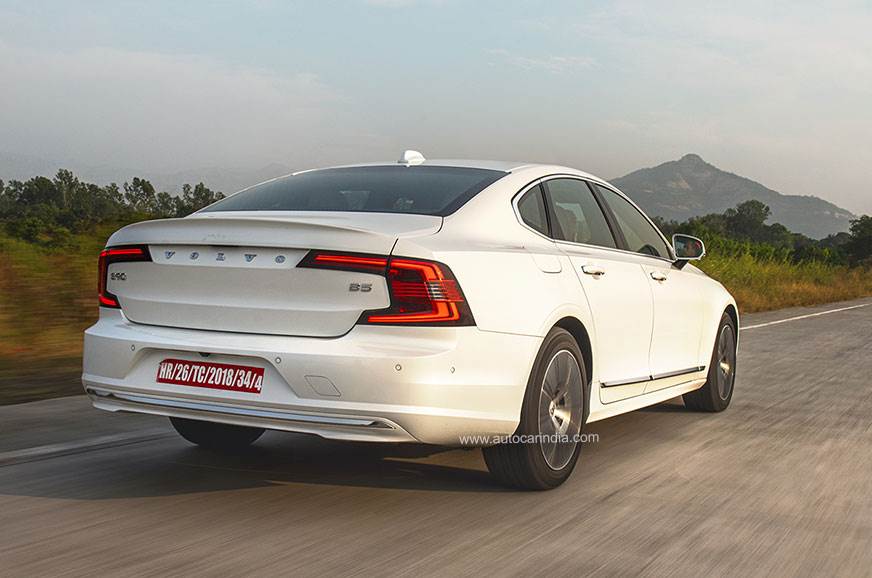 Where the S90 excels is in delivering a comfortable ride. Everything here – like the stiff chassis, the supple coil springs up front, the air suspension at the rear and the perfectly matched dampers – works towards one goal. The chassis cocoons you from the road below effectively. Insulation isn’t as good as on Merc’s E-Class, but road noise is minimal and double-glazed windows do help keep sound out. Volvo’s land yacht  rides in a supple, rubber-footed manner, with medium-sized bumps and undulations dispatched easily. And then even when you come upon some large craters, the Volvo manages to take the edge off quite effectively. You do have to take care over large speed breakers, especially if the car is fully loaded; the long wheelbase and relatively low ground clearance coming into play here.

While it rides well, what the S90 isn’t is a corner carver. The light and easy to twirl steering feels slightly disconnected at higher speeds, body control around corners isn’t confidence inspiring, and while it has a decent amount of grip, pushing the big car faster and faster isn’t particularly enjoyable. Driving it in a relaxed manner is just so much nicer. The S90 will be great to drive over long distances.

Charming, in a word. Beautifully built, tastefully designed and put together, and with plenty of classy bits scattered liberally around the cabin, this is an environment you always look forward to getting back into. The design of the dash is familiar, so are individual components here like the steering wheel, instrument panel, vertically aligned touchscreen and start-stop knob. Volvo has also blended in plenty of high-gloss chrome and piano-black bits into the design, without taking away from the Scandinavian vibe. 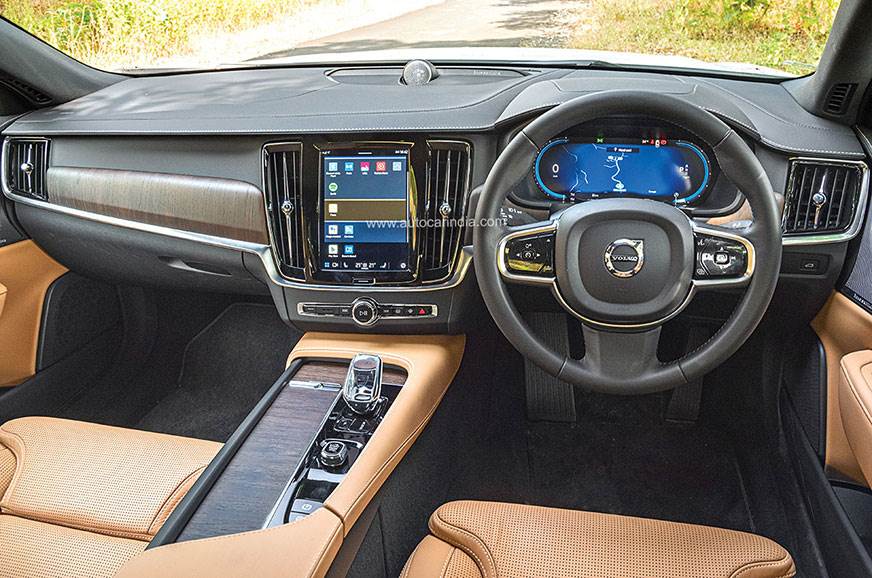 When it comes to features, Volvo’s vertically aligned screen is familiar, but there’s now more functionality like connected tech. Pre-installed­­ now are apps like Google Assistant, Google Maps, Spotify and others, and this makes using the system much nicer. For those of you who love music, there’s also some seriously well-specified hardware, one of Bowers and Wilkins audio systems, among the best around. The S90 front seats also get backrest massage (not for the seat), the crystal knob lends an air of sophistication and integrated with the car is an ‘advanced’ air cleaner, so important with air quality plummeting today. The S90, however, is too reliant on the screen, with too many functions installed here. Adjusting fan speed, especially on the move, is one such problem. While placing climate control icons at the bottom of the screen helps and makes it better than rival systems, using it still requires you to take your eyes off the road. Missing on the petrol S90's centre console is a mode selector or roller . . . .the one that earlier could quickly take you from say a comfort to a sport setting. No big loss, however, selecting a sportier or more dynamic mode hardly makes a difference on the S90. 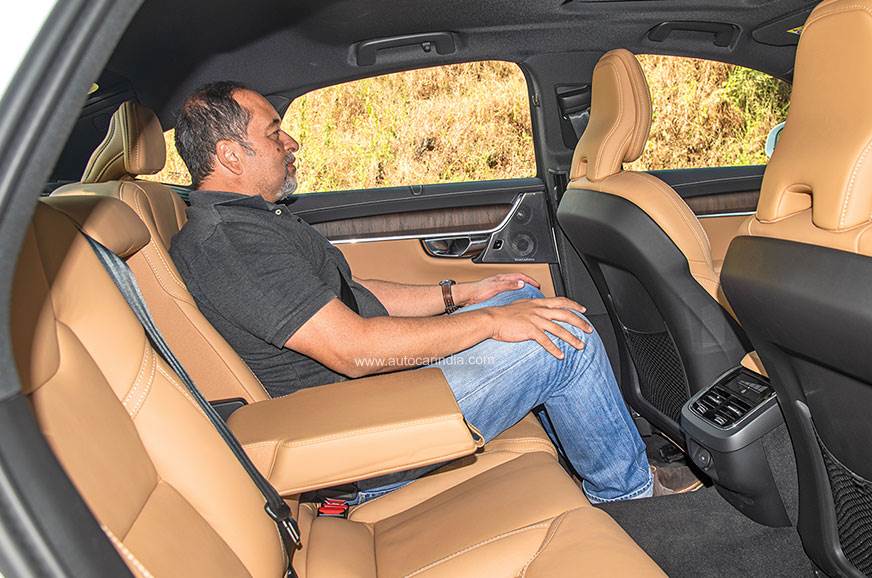 There’s plenty of room in the rear of the cabin, as you can imagine. Loads of legroom, a nicely angled backrest, and the seat, though a bit shallow and flat, is comfortable too. It’s just that you are sat slightly low in the rear, and this means the back seat isn’t as comfortable as it could be.

If you are looking for a luxury car that is beautifully built, well equipped, refined, smooth, silent and effortless to drive, the Volvo S90 B5 with its petrol engine is a strong contender for your money. It even looks distinctive, rides beautifully and it is likely to be amongst the safest cars in its class. You are sat a bit low in the rear, the S90 doesn’t have a sporty bone in its body and Volvo dealers aren’t as widespread as rivals. But if comfort, quality, effortless performance and buying something a bit different appeal to you, take a long hard look at Volvo’s S90 B5, which, at Rs 61.9 lakh (ex-showroom, India) is a lot of car for not all that much money.

What do you think of the refreshed Volvo S90 sedan? Do let us know in the comments section below. 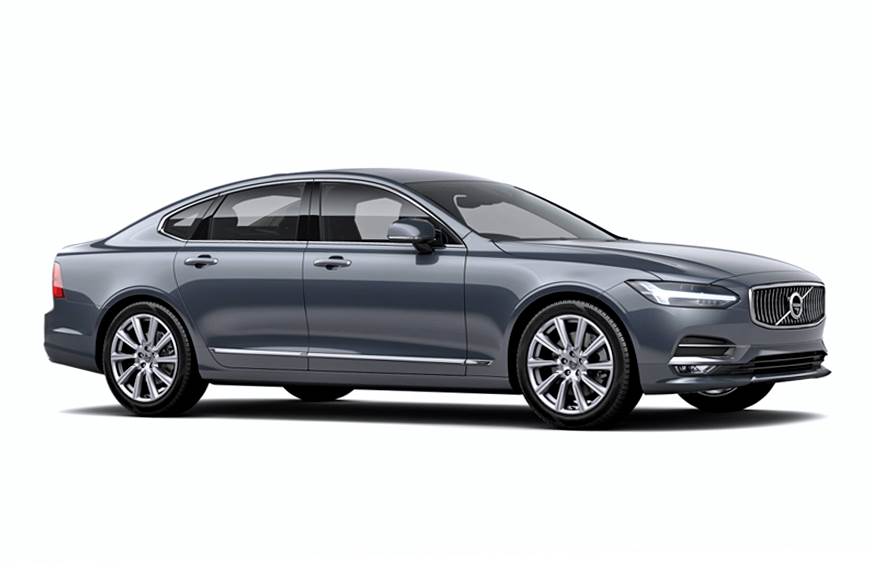 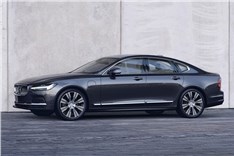