The roadster version of the stunning i8 coupé is a step ahead in every way imaginable. 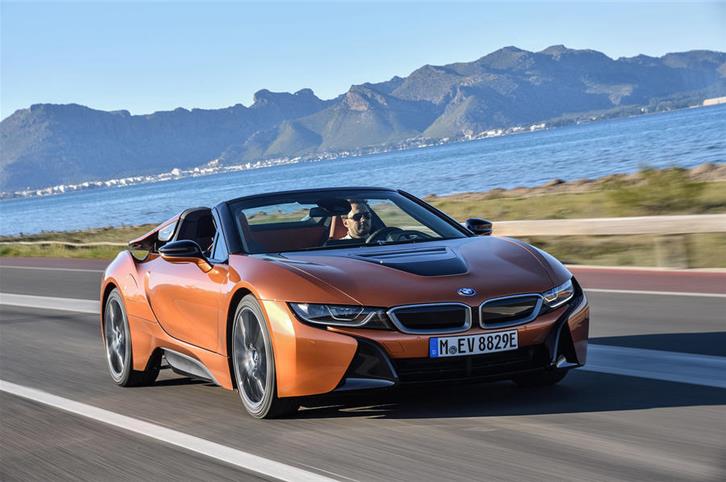 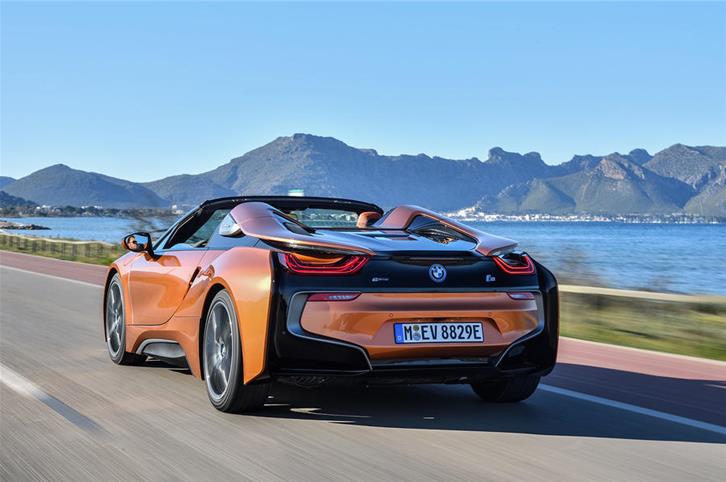 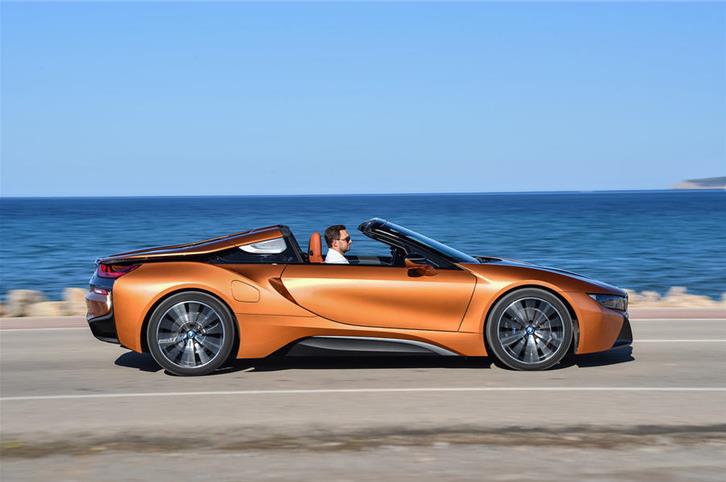 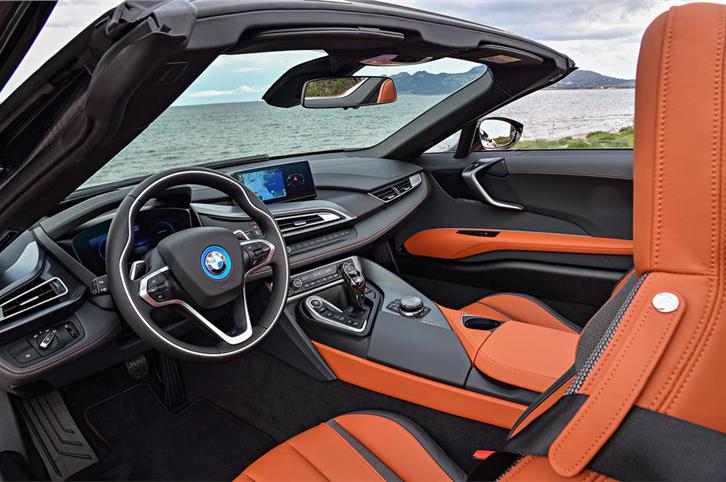 BMW's i8 was the world's first carbonfibre-made, plug-in hybrid-powered sportscar. A car that took the sportscar game a huge step ahead, as far as technology was concerned; it was powered by only a three-cylinder turbo engine with torque from a big electric motor. Performance was very strong and the car had a fair amount of grip.

Now, over five years after the hard-top, comes the i8 Roadster – a car that allows you to enjoy open-top motoring, as well as clean, green sportscar fun, all rolled into one stunning multi-layered, multi-surfaced mid-engine sportscar.

While the basic shape of the car remains the same, with its stunning proportions and overlapping sections done in contrast colours, the roadster gets new 'comets' behind the headrests, a new 'engine cover' and reconfigured doors. Also new, of course, is the part-fabric roof that folds into a panel behind the headrests. The operation of the roof is silent since actuation is totally electric, with no whining hydraulic motors present. And what's nice is that you can go from fully open to fully closed in just 15sec – that’s fast enough to flip it closed before you drive onto a fast four-lane highway. And you can even do it even if you are travelling at 50kph. Neat.

BMW has also worked hard to make sure there is no buffeting or ballooning of the soft-top at speed. To this end, the canvas roof has a band of carbon-fibre built into it at the point at which it meets the windscreen. This reduces buffeting at speed and makes for a solid fit with the modified windscreen top.

BMW has also managed to keep the butterfly doors of the coupé. It has done this by using a part-frameless design for the doors. The car still retains the front quarter-glass and other bits, and the massive blindspot around the thick A-pillar also remains. It's something you need to be wary of.

Half a decade down the line, there are also several advancements made in terms of the powertrain and suspension of the i8 Roadster. Combined power is now up to a maximum of 374hp, and here on the roadster 0-100kph takes just 4.6sec; incredible for just a three-cylinder turbo engine with some electrical assist. While maximum power on the 231hp three-cylinder turbo engine appears to be the same on paper, the power and torque curve are clearly more muscular, with the engine making a lot more grunt in the mid-range. Also increased substantially is the capacity of the battery. The new battery is an 11.6 KWh unit, as against the 7.1 on the earlier i8 coupé, so electric-only range is up to 50km, and the electric motor now puts out 12hp more.

The new higher capacity battery uses more potent cells, but is the same size outwardly and is installed in the same enclosure as before, between the seats. Also similar is the basic structure of the car. The carbon-fibre tub had been reinforced, of course, to compensate for the roof being lopped off. This has been done by using many strips of carbon fibre installed in circular sections throughout the tub of the car. BMW, however, says that the carbon-fibre structure was already so strong, too much reinforcement wasn't needed. Most of the 60kg increase in weight comes from the folding-roof mechanism and additional arms (known internally as ‘Z bars’) that have been included in the rear suspension. The suspension is now also better located, by using a stiff metal plate fixed onto the chassis; this has allowed the ride and handling engineers to soften low speed ride as well.

It looks very similar to the earlier i8 coupé. The dash feels extremely modern and light, surrounded as you are by swathes of carbon-fibre. The doors feel featherlight when you pull them shut, and, overall, you get an impression of being sat in something very futuristic.

Still, there are some key differences. Look behind and there are no rear seats, making this a two-seater, against the coupe's 2+2 setup. There's additional stowage behind the front seats now, and you can keep a couple of soft bags there, and BMW has even created individual fold-out sections or separators that help keep luggage in place. The seats are new and much more comfortable, despite being even more supportive in corners, and they are powered seats with memory, to make this car a bit more luxurious. And BMW's iDrive system finally gets a touchscreen.

On the move, with the roof closed, there isn't much of a difference between the roadster and a regular i8. This is particularly true at low and medium speeds, where almost no outside sounds creep into the cabin, the i8 Roadster behaving like a car with a hard-top. There is a bit more of a roar at higher speeds, but what must help here is that BMW has used noise cancellation technology to keep the cabin silent. And it seems to work.

What, however, is very difficult is getting in and out of the car. Contortions are required to get your leg into the footwell, your back needs to bend before you can slide onto the seat, and then even getting your second leg in is difficult. It makes you question the practicality of those butterfly doors. But they do look stunning.

With the roof open and driven by electric power alone, the i8 Roaster seems to just waft through the green and leafy country roads on our route; very apt. It responds to a tap on the throttle almost immediately because of the electric drive, and though max electric power is 143hp, there's a strong 250Nm of torque delivered from 0rpm. So the i8 feels surprisingly sprightly when you tap the throttle, and progress on city streets is near effortless.

Place the new i8 Roadster in Comfort mode and the three-cylinder turbo engine augments the electric drive systems, and, as a result, the i8 feels even more energetic. Gaps in traffic are demolished with a nonchalance that's extremely pleasing, and what makes it nicer still is that the combustion engine synchronises nicely with the battery and motor.

Knock the gear lever sideways, put it in ‘Sport’, however, and the i8 transforms from a fast car into something that feels lightning quick. Now power from the electric motor and the turbo engine seem to fall over each other in a rush to get out, and this simultaneous explosion of toque results in acceleration that's just explosive. Wow, this sure feels like 0-100 in 4.6sec.

Once the road twists and bends, you can also all but feel the extra traction delivered by the four-wheel-drive system. While the majority of engine power goes to the rear wheels, most of the electric torque is sent to the front wheels. And then, there's the fact that the low-slung and heavy batteries aid traction as well. The engine even revs out seamlessly, has an extremely sporty but discordant three- cylinder note.

What rounds off the driving experience nicely is the fact that the car feels lithe, light on its feet, and extremely comfortable being hurled around corners. There's a directness and weight to the steering that feels perfect. The retuned i8 now turns into corners with plenty of confidence and what's reassuring is that it has so much poise, you tend to keep pushing it harder and harder. And what is truly amazing is that this nonchalance doesn't seem to erode even with all four-wheel sliding.

The reworked suspension and the new Z bars also help the i8 Roadster to pivot quite naturally around its centre, and what also helps deliver loads of confidence to the driver is the fact that the car feels very progressive. Flex from the convertible chassis? There's absolutely none. Even the brakes are super, with no hint of regeneration being carried out.

The ride too is much improved over that of the earlier i8. Sure, there's still a hint of stiffness and it does thud occasionally through large holes, but there's also plenty of suppleness. And that just makes the i8 Roadster so much more usable on a daily basis.

Is it worth waiting for?

With the new i8 Roadster, you get the best of both worlds. On the one hand, the plug-in hybrid has an all-electric range of 50km, so you can cruise around in electric mode only with the top down and truly enjoy the sights and sounds convertible motoring has to offer. It also has a more comfortable suspension, additional performance and is a big step up when it comes to driving dynamics. The i8 Roadster will be expensive when launched at an expected price of Rs 2.8 crore, towards the middle of the year, but if you want an open-top sportscar that's clean, green and seriously mean, this is the one for you. Competition? What competition? The i8 still is in a class of one.