Few cars make small work of big distances as convincingly as the new Bentley Continental GT, we say after a grand tour in one. 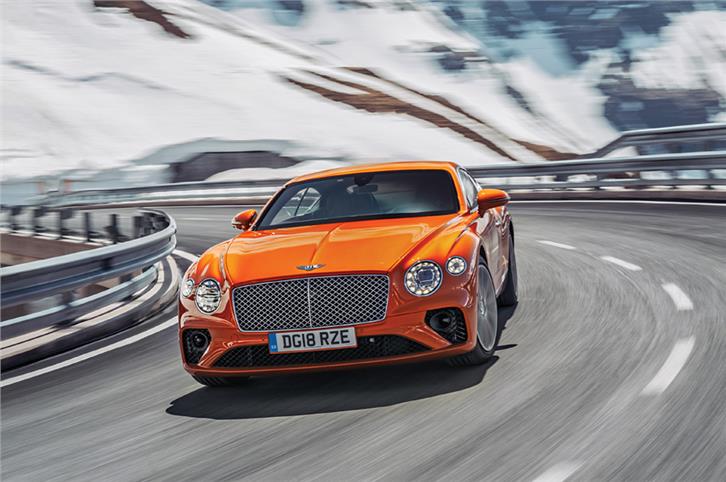 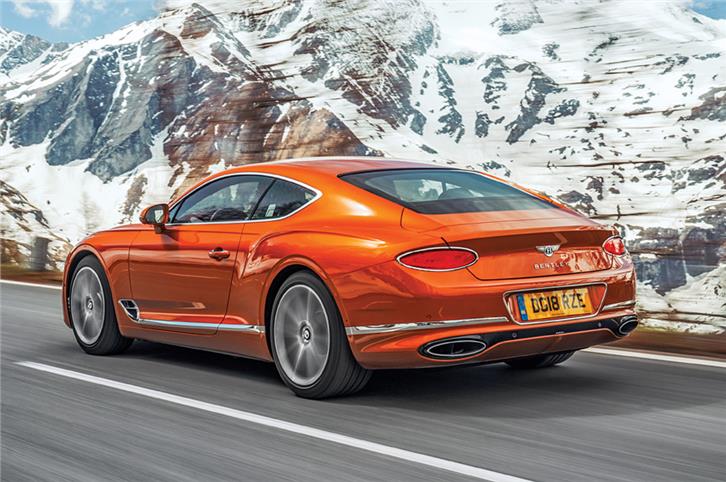 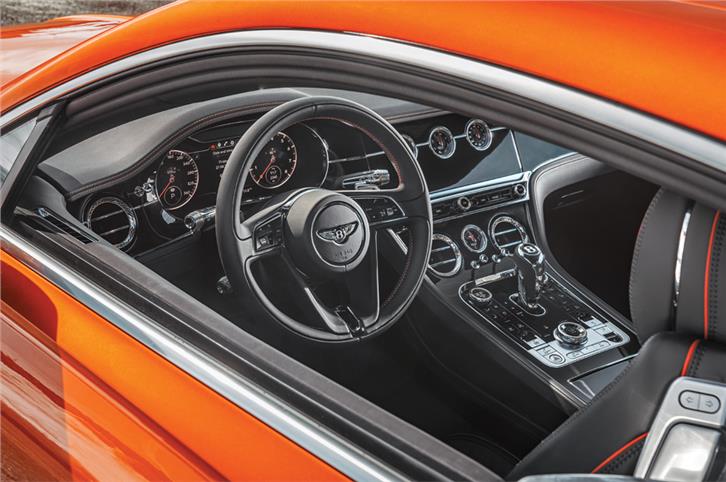 The plan is to have breakfast in Austria, lunch in Italy, make a dash back across the border, and fly to Germany for dinner. It’s a hectic schedule but Bentley presumably wants us to get into the skin of the jet-setters who make up the Continental GT’s buyer base. There must be many of the type because an incredible 70,000 Continental GTs have been delivered since the model made its debut in 2003. It is the bestselling Bentley to date until such time, of course, the Bentayga SUV inevitably stakes claim to that title. But let’s not get caught up in details as perfunctory as sales numbers. I have the keys to a Bentley and a lot of scenic ground to cover.

The sun is up bright and early, and there’s a nip in the alpine air; it’s a gorgeous day to be out driving. But the closer I get to my designated Orange Flame Continental GT, the slower my cadence becomes. The latest Conti GT is a sight to behold. At 4.8m long and nearly 2m wide, it’s a substantial car, but it’s not about size alone. The aluminium body is so lovingly crafted and delicate in its detailing that it makes the last two gens of the Continental GT parked in the vicinity appear like bulky bodybuilders in comparison. The basic look is the same – big bonnet, tight cabin and flowing tail – but the stance is more graceful. There’s a shorter front overhang, longer bonnet and more definition at the haunches.

As I inch closer to the car, my eyes lock on to individual elements. There’s that exquisitely finished mesh grille, and the detailing in the headlights resembles the finest of crystal ware. While I like how the chrome runners at the base of the doors add the right amount of bling, it’s the rear-end styling that I think Bentley’s designers have properly aced. The elliptical tail-lamps and exhausts give this Bentley a behind like no other. The new Continental GT sure is a thing of beauty. 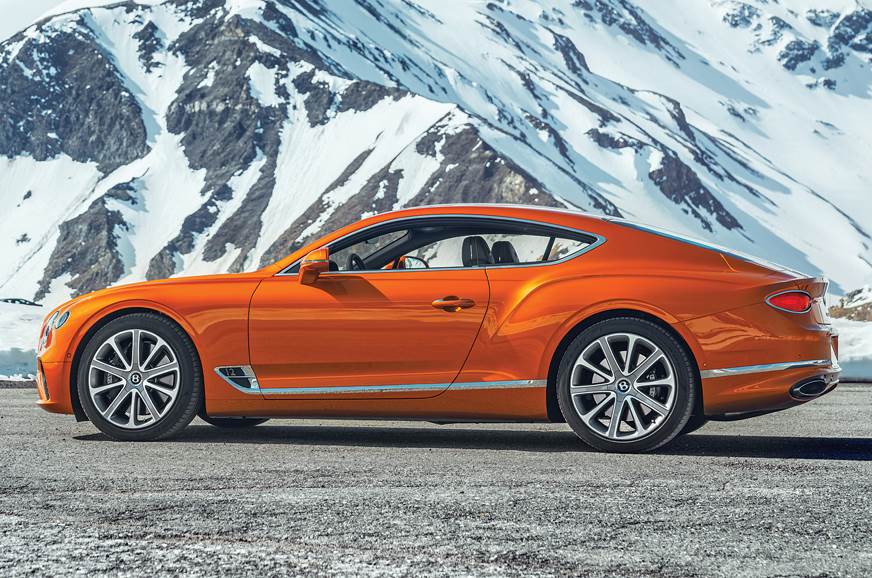 Incredibly, it’s even better on the inside. The doors open wide to reveal a sumptuous cabin, and, once seated, I’m gobsmacked by the sheer level of quality and detail. The wood wears a thick layer of varnish, the leather is of the highest grade you can imagine, and even the smallest of metal bits look machined to perfection. Heck, the ‘diamond in diamond’ embroidery pattern on the seats and door pads were 18 months in development, and comprise 712 stitches each! And, unlike in the Bentayga where it’s possible
to find the odd plasticky button, everything in here spells class. Everything you touch is soft, knurled or glass-faced. It’s a setting fit for modern-day royalty.

What’s also lovely is the new dashboard that wraps around the windows to make you feel cocooned in the lap of luxury. And it’s not old-school stuffy luxury in here; there’s a lot of new-age cool packed in too. There’s heads-up display and in a first for Bentley, the instruments are fully digital too. Think Audi’s Virtual Cockpit with Bentley typography and you’ll get the idea. The system is so well done and so easy to use, even traditionalists won’t miss the absence of analogue dials. But the coolest bit on the inside has got to be the very James Bond-esque Bentley Rotating Display. It’s a three-sided mechanism atop the centre console that rotates between the touchscreen (12.3 inches no less), analogue dials (for a compass, thermometer and timer), and a piece of precision-fit wood veneer, all at the touch of a button. It’s a brilliant detail with a lot of show value. However, not so special is the rear seat that is good for short stints only.

All the time spent admiring the car has set me back by a good few minutes. People in this part of the world are sticklers for schedule, so I better get moving to make it in time for lunch.

The new Continental GT is available with only one engine for now – a twin-turbo, 6.0-litre W12. It’s a development of what we’ve seen in Bentleys before, but it’s been re-engineered to allow for both direct and indirect fuel injection. Also new to this engine is cylinder-on-demand tech that shuts down six cylinders at light loads in an attempt to arrest the alarming rate at which the W12 can deplete a full tank of petrol. With all cylinders alive and kicking though, the Continental GT’s W12 makes 635hp and, prepare to gasp, 900Nm of torque. 900Nm at 1,350-4,500rpm!

I get the full dose the first time I mash the throttle pedal. The Continental goes from 50-120kph so devastatingly fast, I’m almost caught off-guard. Did someone say the GT weighs 2.2 tonnes? Because that inertia-less lunge for the horizon sure didn’t feel like something I’d associate with 2.2 tonnes of car. I give it another go, and then another, and each time I’m blown away by the sheer might of this engine. There’s so much power, and it’s so readily accessible, it almost feels excessive. Almost. Also playing a starring role in the performance act is the Conti’s new eight-speed dual-clutch gearbox; it’s lightning quick in shifts, and a big part of what makes the Conti hit the ton from a standstill in just 3.7sec! Isn’t it amazing what turbos and quick gearboxes can make big, heavy cars do? 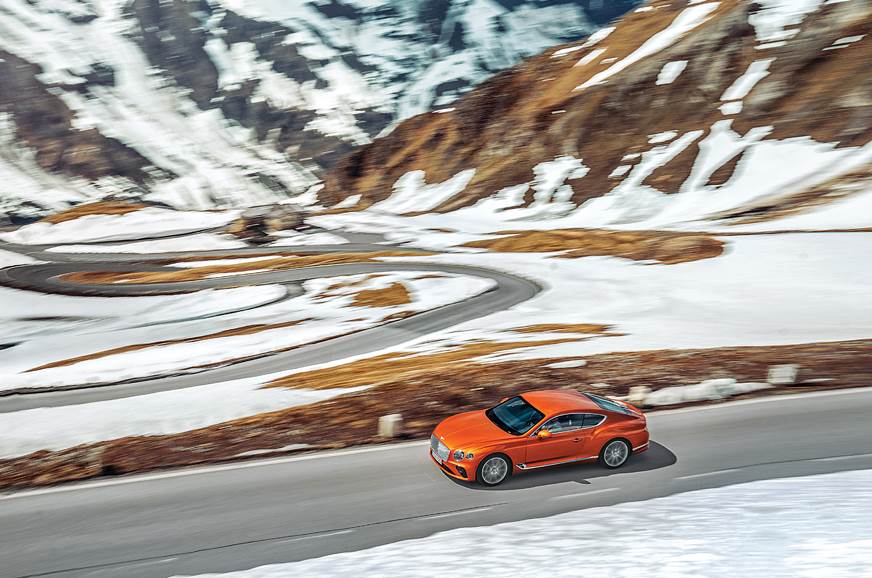 The route map shows there are long sections of motorways ahead, so it’s about the right opportunity to ease off and settle into a comfortable rhythm. And it’s here that the Bentley’s continent-shrinking GT abilities come to the fore. The engine is spinning at barely over tick over, and outside noise is so well suppressed, I try to pop my ears, lest it’s the altitude that’s caused temporarily reduced hearing. Nope, it really is that quiet. Seat cooling on, massage set to ‘Pulse’ and cruise control at 130kph, I can think of worse ways to cover big distances. Sure, I’m not using even a quarter of the engine’s vast reserves of power, but there’s the smugness of knowing that the Bentley and its W12 are always armed and loaded to execute orders from my right foot should the need arise.

The highlight of the drive route is the Grossglockner High Alpine Road, rated as among the best driving roads in the world. It’s 48km of serpentine tarmac amidst the Alps. There’s a bunch of Mazda MX-5s that have made their way down and the smiles on their drivers’ faces sure paint a pretty picture of the road ahead. Only thing is, I’m not quite convinced this is the setting for the big and portly Bentley. And that’s despite being armed with the knowledge that the mass is split 55:45 front-rear, and that this Conti shares its platform with the brilliant new Porsche Panamera. I ease into the climb to get a feel for the car’s handling and, almost immediately, I’m pleasantly surprised. There’s no getting around the car’s sheer width but it’s quite easy to tuck into corners and the steering is weighty and feelsome. I have the car in ‘B’ or Bentley mode, that’s set up to bring the best out of the Conti GT, and it’s clearly delivering on that brief. There’s also tremendous confidence from the brakes that comprise 420mm discs up front and 380mm discs at the back. There are cars with wheels smaller than the Bentley’s brakes! 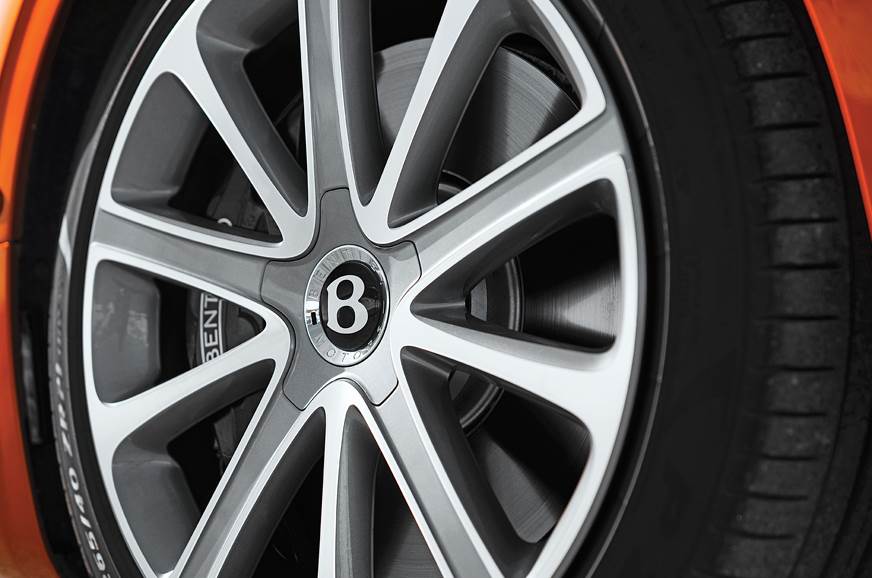 Its brake discs are larger than some cars’ wheels!

A few kilometres in, and I’ve got a good connect going with the car. The monstrous torque means elevation changes go by unregistered, the short straights between corners are dispatched in no time, and the boom and snarl from the exhaust is ricocheting off the mountainside. But the real revelation is the handling. It’s no tight sportscar, but the Bentley feels grippy without being inert (the all-wheel drive only ever sends 38 percent power up front; 17 percent in Sport mode), and the torque vectoring by braking helps tighten its line into corners. Also, a big hat tip to the 48V active anti-roll bar system. It keeps the heavy body in check, and, along with the air suspension, makes the car feel incredibly poised at all times. And to think just minutes ago, I thought the Continental GT would be a rolly-polly understeery yacht.

The roads visibly deteriorate as we enter Italy. But the difference in comfort between smooth tarmac and cobblestone pathways is commendably low. Yes, you hear a bit of pitter-patter on the poor surfaces, but the ride remains pliant and supple. Quite something for a car that sits on 21-inch low profile tyres.

On the post-lunch blast back to Austria, I’m taken by how flat and composed the Bentley feels at all speeds. It’s unshakeable on straight roads and it’s sensational as a tool for long-distance travel. 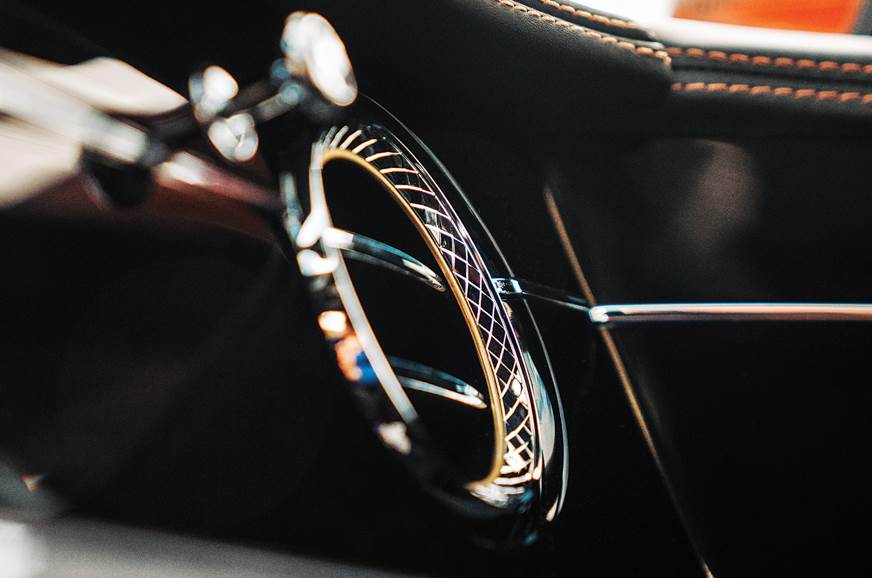 Attention to detail in the cabin is immaculate.

Question is, how many luxury GT buyers in India actually use their car for this purpose? The number is minuscule. Indian buyers who can afford the Continental GT’s Rs 3.6 crore (ex-showroom, Delhi) ‘starting’ price are sure to be more concerned with how the Conti looks, how it makes them feel and how big a statement it makes. On these fronts, the Continental GT is as good as it gets. But having experienced the GT in totality, I can only hope owners venture out of town to see how talented their car is. A super-luxury car you can do 1,000km in a day in? This is it. 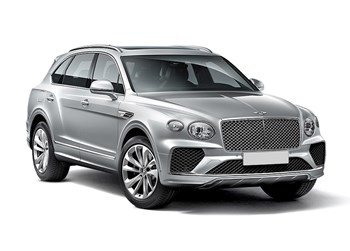