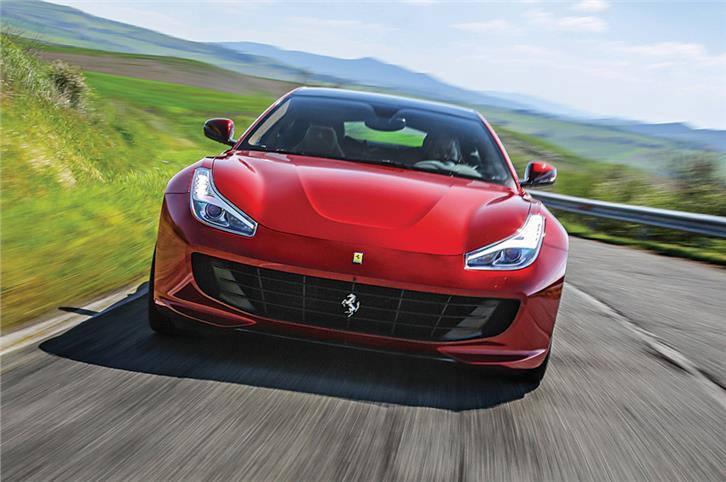 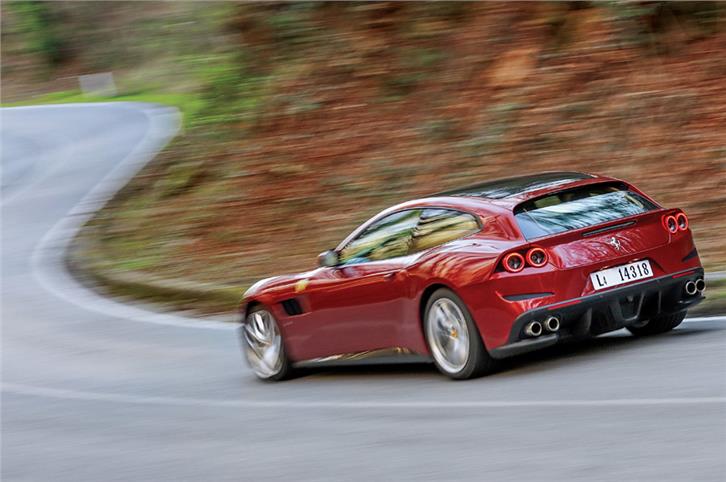 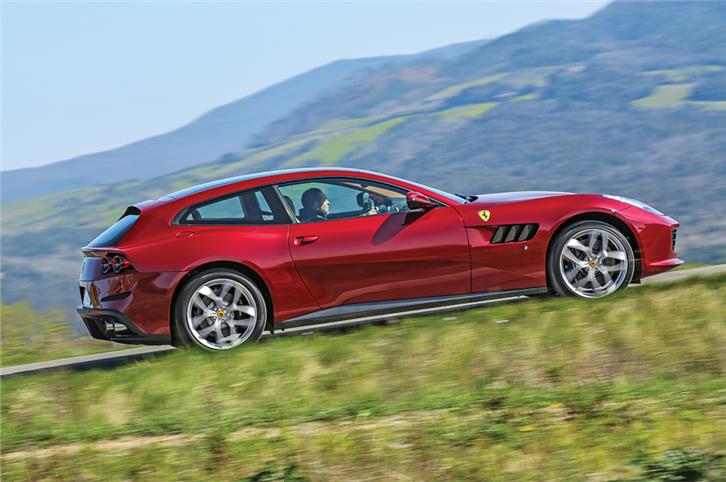 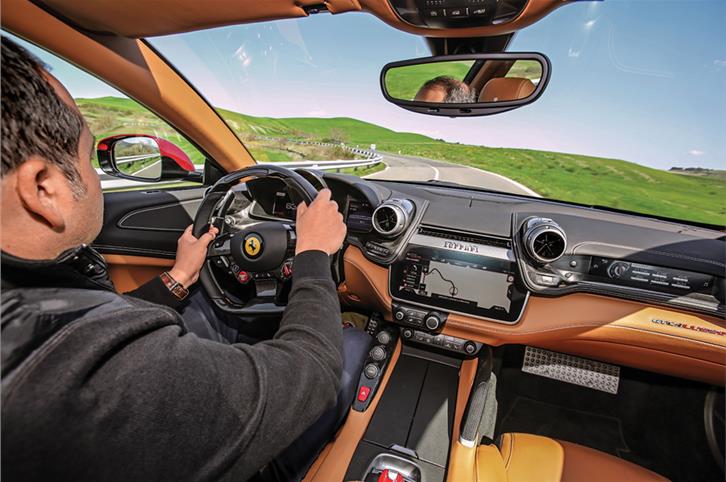 Ferrari has a new version of its four-seat GTC4Lusso. It gets a new twin-turbo V8, a rear-wheel steering system and an all-new fun-to-drive attitude.

Step one of driving any 610hp car involves getting comfortable behind the wheel. This is no sweat on Ferrari's new GTC4Lusso T. The square-bottom steering wheel adjusts to exactly where I want it and getting that relaxed-but-attentive driving position isn't difficult either because there's plenty of legroom. Then, of course, comes the slightly more difficult bit; getting to grips with it. The first hurdle involves negotiating some cobblestoned back streets that seem to randomly snake through one of Tuscany's most haphazardly planned villages. Yes, the visibility from that big windscreen is good, and that does make it easier, but this is a 4.9m long car with an almost three-metre-long wheelbase. A tiny Fiat 500 it isn't.

Eventually, we break through – straight into what looks like an Impressionist masterpiece. Rolling hills, olive groves, vineyards, tall needle-like Italian cypress trees and mansions made of centuries-old stone – time seems to have stood still here; you can all but imagine Renaissance masters sitting in the fields with easels, paintbrushes and oil paints.

Off on a trot

What's causing all those fabulous colours to blur, however, is Ferrari's new GT, the inverted-shovel-like nose ripping apart the scenery. There was a time when four-seaters were a lot more ponderous and lethargic than their two-seater cousins; there was also a time when a roughly 250kg weight penalty was a death knell for agility, but today, with Ferrari's V8 pumping iron and blasting out 760Nm of torque, upping the pace is just effortless. I'm barely using an inch and a half of throttle, but the GTC4Lusso T is already vaulting towards the horizon like I've mashed the throttle into the pedal box. It's what the turbos and direct injection have delivered – masses and masses of torque. The max torque comes in at around 3,000rpm and once you get onto that, all that weight just melts away.

This cavallino rampante also possesses plenty of soft skills. Sure this engine has plenty of grunt once the turbo comes in, but responses just off idle speed are quite good too. Progression is so smooth and friendly, I barely detect any lag. And that's despite a specific power output of 158hp per litre. How has Ferrari managed this? Simple, it uses technology to cheat physics. Get a load of this: the turbos use twin-scroll technology making them feel like a quad turbo setup; this engine uses a flat-plane crankshaft for better responses and cylinder scavenging; and each cylinder uses up to five pulses from the spark plug per power stroke to ensure all the fuel is burnt.

The GTC4Lusso T also impresses at low speeds with its smooth and fluid steering and the nicely weighted brakes make driving it in traffic super comfy. Even the ride is surprisingly good over regular potholes. Ferrari has been using the Magneride active damper system for years, and it seems to work a treat here too. The suspension is actually supple even when roads are pretty bad. The short travel spring and those attractive 20-inch rims, however, do get caught out on a particularly poorly patched section of the Autostrade.

But enough of canter, it's time to up the tempo and switch to a full gallop. Some of the best driving roads in Tuscany are before me, and since this corner of Italy seems surprisingly devoid of any real traffic, this is not an opportunity to be missed. It's just rolling hills and corner after corner after corner here.

First up, a tinge of disappointment. Yes, that explosive torque-laden mid-range is great but there's also nothing quite like a naturally aspirated Ferrari motor that sings all the way to 9,000rpm. So, while this motor gets full marks for many things, the feeling of ever increasing engine acceleration and sharp responses at high speeds – max power at just 7,500rpm – means it feels like someone has lopped off the best bit of the powerband. Those long hard pulls to the redline, the wide 6,000rpm powerband, they're just not part of the Ferrari V8 experience anymore, and that smarts. Ouch.

The Ferrari, however, punches hard in other areas. I've steadily been upping the pace around corners in this quiet corner of Italy, but while I've been focusing on the engine, the extremely high levels of agility catch me unaware. This car has the wheelbase of a limo, but, from behind the wheel, it feels nothing of the sort. What Ferrari seems to have done is compartmentalise each important parameter, and then attack it with a vengeance. The lack of agility with that long wheelbase has been countered with the use of rear-wheel steering. The car rotates beautifully around its hips when you turn in, and Ferrari has set-up the steering so well, the transition is smooth and linear. Yes, the steering could have done with a bit more feel, but the GT just seems like it can hit the apex of every corner, however tight it is. Up next is traction; a bit more difficult here because the GT ditches the four-wheel-drive system you get with the V12-powered unit. To counter this, up to 54 percent of the weight of the car now rests on the rear wheels. So, when you slip past the apex of the corner and start to accelerate out, there's plenty of weight over the rear wheels and good traction. It may not squat down at the rear and slingshot you out of corners like a rear-engined Porsche 911, but the rear axle feels extremely 'solid', and this gives you plenty of confidence to accelerate harder and harder out of corners. Of course, lending a helping hand is Ferrari's E-diff, something many supercar makers tend to omit. This allows the electronic brain of the car to open the differential when it is beneficial and close it when wants to lock it down and let the power flow.

Soon I get so comfortable with this near five-metre-long car that I start to drive it like a two-seater. And then, because the car responds so beautifully, I push harder still. What's amazing is that the front end just seems to grip and grip. And then as the rear begins to lose grip, kept in check by Ferrari's space age driver aids (see box), the car seems to attain a balance so sweet, it's an absolute joy setting up the car for corners and power out with a measured right foot.

What makes the driving experience complete, however, is the fact that all the various elements are so beautifully stitched together, the whole is greater than the sum of its parts. The explosive torque and punch of the engine, its willingness to deliver a whip-crack response, the super-quick twin-clutch gearbox, the sharp and grippy front axle, and the ability of the rear axle to put down all the power, all work so well in concert; it's like a symphony orchestra under the control of a master conductor. It really does feel like a car half its size. It may be a bit down on pace compared to company's full-blooded sportscars, but that magical Ferrari driving experience that makes you feel like a better driver than you really are; yeah, that's there in spades.

Two plus two is

The GTC4Lusso T even manages to work well as a four-seater. Surprisingly, ingress isn't too difficult, due to the impossibly long doors, and though the roof is low, you don't need to be a world-class contortionist to clamber past the front seats. There's even enough space for my size 11 and a half feet. Sitting in the back also feels kind of unique; it's nice and snug to begin with. Tuscany looks fabulous with the masses of glass all around, and since I'm cocooned in what feels like a giant leather-lined baseball glove, I am pretty comfy.

The cabin is beautifully built too. What I also like is the fact that Ferrari has delivered a massive 10-inch screen that works superbly. And what's nicer still is that there's a display for the passenger as well, just so that they can monitor the speed and revs; nice.

At the final coffee stop, I linger to admire the car from the outside. Of course, the unconventional profile doesn't really help; it looks a bit odd from certain angles. But there's no denying there are a few bits that look just stunning. The nose hits the spot. The power bulge on the bonnet is right on the money, the wide shark-like mouth is stunning and the fact that the headlights get their own big bulge makes them stand out too. Then there are the shark-like gills that are done in carbon fibre, the beautifully sculpted bulging fenders, and that near three-metre-long wheelbase that do lend it some elegance. But the rear, apart from the Coke-bottle hips and the LED tail-lights, is a bit odd.

Ferrari's GTC4Lusso T is many horses in one. Part load-carrying draught horse, part thoroughbred racehorse, part agile and quick-to-turn polo pony; it fuses the best bits of each into a new sub-breed. It even has a 450-litre boot. How about that? It won't quite deliver the pace of a bonafide sportscar, it's more a plus two (2 + 2) rather than a full-fledged four seater, the suspension did get tripped up by the bumps on the high-speed Autostrade, and it will cost Rs 4.2 crore when it goes on sale here in India. But if you are willing to compromise a bit, the Ferrari experience is also available in the guise of a four-seater, without the expense and prodigious thirst of a full-on V12. The semi-practical Ferrari; yeah, that mythical beast actually does exist.