The second generation GL 350 is offers more luxury and power at a lower price. 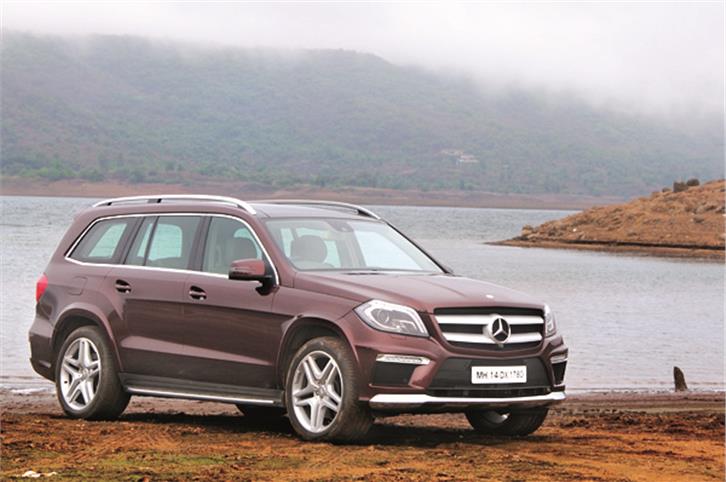 Mercedes-Benz first introduced the GL in 2010 and when brought to India, it was already towards the end of its life cycle. It had started to look dated and as a full import had a steep price tag (over Rs 90 lakh). Now, the carmaker has refreshed the GL 350 and this seven-seater is now assembled locally, allowing for a more affordable Rs 77.5 lakh price.

The GL gets a huge, three-pointed star on the massive grille up front. And this new GL’s shape is a lot softer and has a lot more detailing to it than its predecessor. The chrome strip that runs along the bottom of the front bumper is one of the touches aimed to make the behemoth look premium. The gently sloping roof disguises the van-like profile to some extent, but what really helps the looks is the AMG body kit that the initial batch of GLs will come with. The kit includes front and rear skirts, and gorgeous 21-inch wheels shod with massive road tyres.

The car gets air springs and comes with huge disc brakes. It also gets electrically assisted power steering as opposed to the previously use hydraulically assisted power steering. There’s a new steering assistance system which adds small corrective steering inputs if, say, the vehicle is oversteering. Also standard is the crosswind assist, which uses the brakes to keep the car stable when driving in strong crosswinds.

This time around, Merc isn’t offering the optional off-road kit – lockable differentials and a low-ratio transfer case. There is a special off-road programme for the ESP and hill descent control as standard though.The GL’s cabin is typical Mercedes fare. The entire dashboard (similar to the M-class) has been brought up to speed and now looks far fresher and cleaner than before.

The column-mounted gear selector leaves space in the centre console for very easily accessed cupholders. And, of course, there’s plenty of underlying solidness and heft to everything in here. We’ve never been fans of Merc’s COMAND system, which is not quite as intuitive to use as BMW’s i-Drive or Audi’s MMI. The screen has old-school fonts and shuffling through the various menus isn’t as simplified as we would like.

The GL’s selling point, though, is its huge cabin; very few rivals can seat seven in as much comfort. There’s good space up front and plenty in the middle row, but it’s the third row that is properly spacious, thanks to the fundamentally upright shape of the car. It also helps that the cabin is bright and airy because of the large glass area.

As for boot space, with all rows up, there’s adequate space that expands to a massive 2,300 litres with all rows down. A neat feature is the electric folding third row that folds flat into the boot floor. In launch edition spec, you get lots of kit too, like electric steering adjust, three-zone climate control, a panoramic roof and a navigation system that’s integrated into the COMAND system.

In its latest state of tune, the tried and tested 2987cc V6 diesel that resides in the GL 350 CDI is really powerful. It now has 258bhp at 3600rpm and a stump-pulling 63.2kgm of torque from 1600rpm as compared to the old GL’s 224bhp and 52kgm. It’s an engine that makes light work of the sheer weight, as is evident from the 8.9sec 0-100kph time. This GL has as much accelerative thrust as you’ll ever need for open-road driving, and the impression is of a car that has a surplus of grunt for whatever situation you might be in. It’s an effortless cruiser and a deceptively quick one at that. Because of its sheer size, you don’t realise how fast you are going – a feeling that’s enhanced by the smooth shifts of the seven-speed torque-converter automatic.

We loved how this engine had the answer for any situation – it is responsive in slow traffic and, because it’s got so much more torque than before, throttle response is good and, crucially, it has much more step-off thrust than the earlier car. If anything, the gearbox is a bit slow to respond to downshifts, a typical trait of Merc’s 7G-Tronic transmission. It’s also a very quiet motor – at idle there’s just the faintest of noises and absolutely no vibration. And, when you stretch it, what you do hear is the pleasant hum of a cultured V6.

Like most Mercs, the GL has a pillowy ride and it’s clearly been set up for comfort. However, the ride is not as flat and consistent as we would have liked, which was a big disappointment. Sharp edges catch the GL off guard and send a shimmy through the body shell. The low-profile tyres are partly responsible for corrupting the ride, but the combination of a 2.5-tonne kerb weight, high centre of gravity and soft dampers is what gives the GL its unsettled composure. You need to really use the adjustable damper settings to get the best out of the GL’s dynamics. At low speeds on lumpy roads, you need to be in Comfort mode because Sport feels too firm, and when you’re driving on a winding road you have to go to Sport because it’s just too wallowy otherwise. It’s best not to corner too hard in the GL because it rolls alarmingly, and the almost sports-saloon levels of roadholding and agility found in a BMW X5 remain beyond the capabilities of this Merc.

The silver lining is the light steering, which may not have the best feel, but is accurate and weighs up quite nicely to give you a sense of confidence even at maximum speed. The brakes are also really powerful and have impressive bite.

In the confines of the city, it can be quite a handful. The sheer length and near-two-metre width can make it a bit of a squeeze through tighter spots. Still, the big glass area and square sides make it easy to judge where its extremities lie. Owners will also appreciate the Park Assist feature, similar to the one first seen on the VW Passat. It will steer the
car into a parking slot if it decides the space is big enough, leaving throttle and braking control with the driver. But remember, this is a long vehicle and will stick out of most standard parking spaces.

Despite its massive weight, the GL managed to return some decent economy figures. In the city, thanks to the Eco mode and stop-start system, the GL managed 6.5kpl, while on the highway it gave 10.5kpl. The large 100-litre fuel tank gives the Merc a very useful range of 850km.

The GL is a great option for those who are looking to travel in numbers and in ultimate luxury. It’s got all the good bits retained from the older car and the best part is now, it comes with a much more affordable price tag.