Analysis: What next for Maruti diesels?

Maruti Suzuki has announced plans to phase out diesels by April 2020 leaving a gaping hole in its line-up. We analyse what could be the way forward. 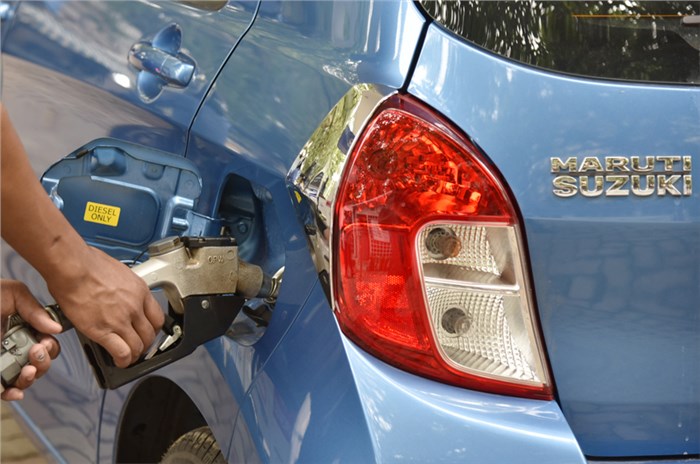 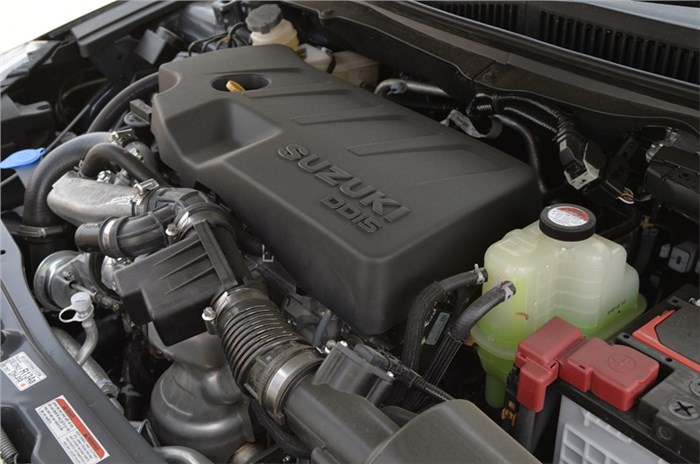 Maruti's new BS-IV-only 1.5-diesel could have a very short lifespan in its current form. 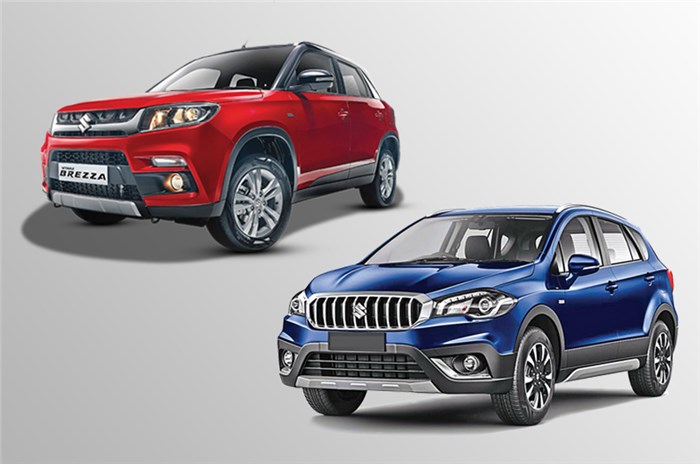 At present, the S-Cross and the popular Vitara Brezza are diesel-only.

In a shock announcement at its annual financial results event, India’s largest carmaker Maruti Suzuki made public its plans to phase out diesel vehicles from its range by April 2020. The announcement comes just weeks after it rolled out its long-awaited in-house 1.5-litre diesel engine, which has been branded the DDiS 225. The decision to phase out diesels is centered on the huge costs of upgrading diesel engines (including the new DDiS 225 unit) to be compliant with BS-VI emission norms that come into effect on April 1, 2020. 'Will buyers be willing to pay about Rs 1.5 lakh more for a BS-VI-compliant diesel?' is the question Maruti Suzuki’s top brass doesn’t have the answer to.

Maruti and Suzuki don’t have a history of making diesel engines. The Zen diesel in the early 2000s used a Peugeot diesel engine; although it’s the Fiat-sourced Multijet 1.3-litre engine that pushed Maruti’s diesel sales into high gear in the years to come. The 1.3-litre engine, first introduced on the Swift in 2007, found its way onto more models, and in 2018 was an option on as many as eight models in the Maruti line-up. What helped the popularity was the massive gap in petrol and diesel prices (Rs 30 at its peak) in addition to the high efficiency and low running costs of the DDiS-branded engines.

With diesel sales showing no signs of slowing down in India, Suzuki took the decision to build its own diesel engines. The move would eventually free Suzuki of the huge royalty payments to Fiat for the use of its engines – and importantly, would give Suzuki control of its own diesel destiny. However, the engine development project was far from smooth as Suzuki, with no history of developing a diesel engine, faced a mountain of obstacles. Suzuki’s first-ever diesel, the 0.8-litre, twin-cylinder DDiS 125 that debuted on the Celerio was extremely efficient but its sub-standard refinement kept buyers away. Maruti pulled the plug on the diesel Celerio in 2017.

A larger 1.5-litre, four-cylinder diesel engine from the same family has been in the works for a long time and finally made production on the Ciaz, last month. Impressively, the refinement issues that plagued the smaller Suzuki diesel have been addressed to the point the DDiS 225 is actually among the smoothest diesel engines of the size. The catch? The engine is only BS-IV-compliant, for the moment.

The way forward for diesels

Even though Maruti will bid adieu to Fiat’s 1.3-litre diesel engines over this year, it has just introduced its own new 1.5-litre engine on the Ertiga MPV and will do so for the S-Cross crossover in the months to come. But given that in the past, Maruti has announced that it will not produce BS-IV engines post Dec 31, 2019, the new BS-IV-only DDiS 225 engine could have a very short lifespan in its current form. The time frame is just too short to recover the Rs 1,000 crore-plus investment in the engine project.

The question is, is there a business case for Maruti to go BS-VI with the new diesel engine? Overall sales trends show diesel on the decline. In terms of overall passenger vehicle sales, the share of diesels among the total sales of passenger vehicles during 2018-19 declined to 36 percent from 40 percent in the previous year. Putting the focus on Maruti, its share of diesel vehicles to total sales was 25 percent (4,41,091 units) in FY19, down from 29 percent (4,74,953 units) in the 2018 fiscal.

A quick look at fuel-wise sales of Maruti's models (see graphic) reveals that consumer demand for diesel dropped in favour of petrols for the Baleno, Dzire (including Tour) and the Swift, even as sales increased on a year-on-year basis. Volumes of the Ciaz sputtered purely due to a decline in demand for the diesel variant while petrol remained nearly unaffected. The Ertiga recorded near-equal sales for its petrol and diesel variants. 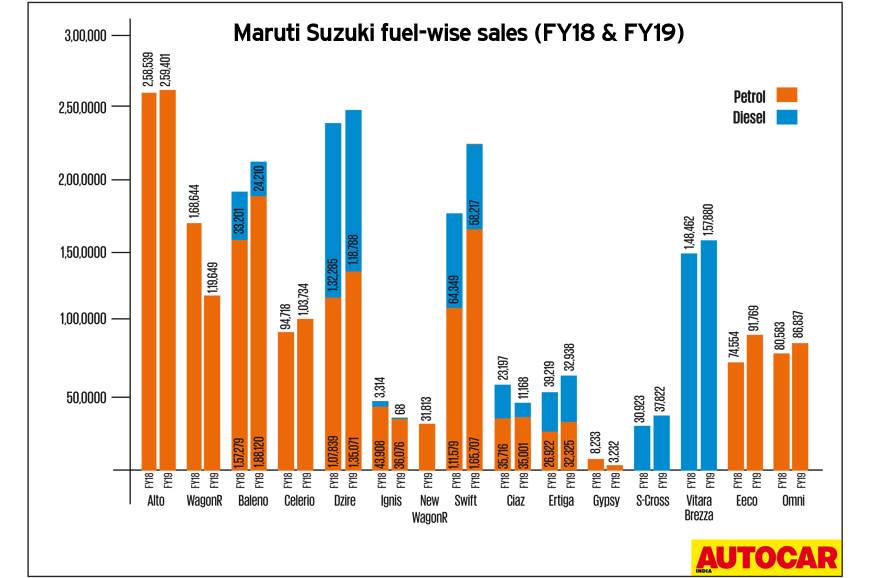 Sales of the diesel-only S-Cross improved 22.31 percent to 37,822 units; but if there’s one model that really helped Maruti’s overall diesel numbers, it’s the Vitara Brezza. The model sold 1,57,880 units in the period despite being offered as a diesel-only option. That's set to change because as we reported last month, Maruti is working on a petrol version of the Brezza (Suzuki’s new K15B 1.5-litre engine). So could the Vitara Brezza's overall sales have been higher if not for the lack of a petrol? The demand for petrol variants for some of its competitors hints at the same. Tata Motors nearly sold a petrol variant of the Nexon (26,961 units) for each diesel model (28,047 units) and the petrol-to-diesel ratio for the Ford EcoSport stood at 1:2.

The cost and complexity involved in upgrading Maruti's diesel line-up to meet the BS-VI norms at a price that buyers will accept is a challenge. Maruti Suzuki says it will revisit its decision to opt away from diesels if there is a strong demand. Aside from meeting the norms, the carmaker will also have to assess the life-cycle cost of the engine, which is over 10 years. The introduction of Real Driving Emissions (RDE) testing around 2023 will require SCR systems in many diesels, further raising their cost so Maruti will have to take that into account as well. Moreover, the fall in resale value of diesel cars could affect their demand. At present, diesel vehicles older than 10 years are not allowed to ply in Delhi-NCR, and there remains a possibility that more states could join the fray.

If not diesel, then what?

While the absence of a diesel is expected to impact volumes, Maruti is turning its focus to CNG and more fuel-efficient petrols, armed with hybrid technology to fill the void. 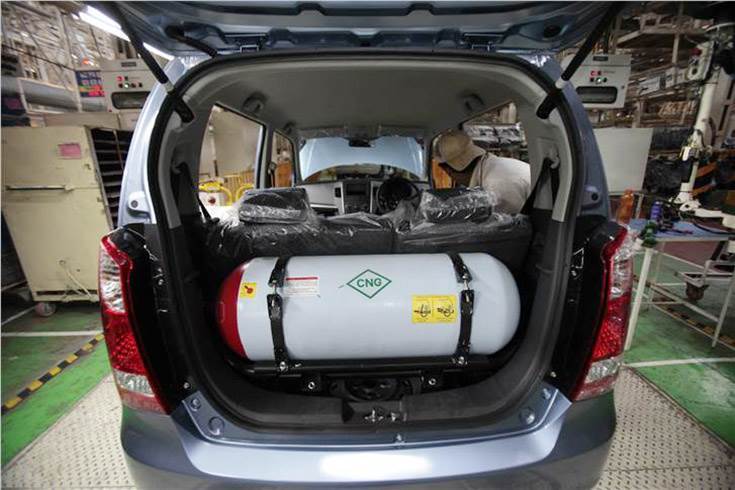 Maruti has sold over 500,000 CNG cars till date with the Wagon R being the best-selling of the seven CNG-model portfolio.

In December 2018, the company crossed the milestone of 500,000 CNG vehicle sales in India. At present, it offers the CNG option in some of its models including the Wagon R, Celerio, Dzire, Eeco and Super Carry. The Wagon R is the highest-selling CNG model in the Maruti Suzuki CNG portfolio.

Maruti has a head start on most rivals in CNG technology but the fact is, India’s CNG-filling infrastructure is simply not widespread enough. The ‘commercial vehicle’ image and perceived lack of performance are other issues Maruti will have to address for its CNG range, even if low running costs are an obvious pull for the fuel type.

Petrol-electric hybrids, however, have a higher chance of mass acceptance as an alternative to diesels. Mild hybrids come with the advantage of an enhanced fuel economy vis-à-vis a standard non-hybrid petrol, as well as a lower cost differential versus a BS-VI diesel.

Maruti is even looking at stronger hybrids and is said to be working closely with Bosch for its electrification strategy that will involve localisation of a high percentage of its components.

But the carmaker does not have to go it alone. Under their joint association, Maruti's parent company, Suzuki, and Toyota are looking to make a big push for hybrid-electric vehicles with the local procurement of hybrid systems, engines and batteries. Toyota will supply its hybrid system to Suzuki too. And what is likely to help is that Maruti will source the battery pack from the Suzuki-Denso-Toshiba consortium that will start producing lithium-ion batteries in Gujarat by 2020.

However, more than the technology, it's the enhanced economy that a mild- or a full-hybrid provides that will be a bigger draw for buyers.

Maruti’s new BS-VI-compliant Baleno DualJet that features Suzuki’s K12C petrol engine and Smart Hybrid tech has been priced at Rs 7.87 lakh. The price is a steep jump over the standard Baleno petrol’s Rs 6.97 lakh price tag and is just shy of the Baleno diesel’s Rs 8.13 lakh price (all prices for Zeta variant, ex Delhi). However, if you factor in the estimated Rs 1.5 lakh price increase to a prospective BS-VI-compliant Baleno diesel, and you’ll see the hybrid in a far better light. The DualJet is more economical than the standard Baleno petrol (23.87kpl vs 21.01kpl); but then again, the existing diesel is still more efficient with an ARAI-tested figure of 27.39kpl.

So while the diesel remains far cheaper in terms of running costs over the DualJet, its steep price over the latter post-BS-VI implementation will far outweigh the gains in running costs, making it difficult for buyers to recover the vehicle's price.

Can diesel make a comeback?

Maruti is sure to feel the immediate impact of not having a diesel post April 2020. The impact could be felt more in the UV segment, which in India, is predominantly diesel. In fact, diesels accounted for 83 percent of utility vehicles sold in the last fiscal. With the SUV segment heating up and a raft of models set to be launched this year, Maruti, which sells the highest number of UVs in India, could lose some ground to competitors. Ford India has said it will continue to sell diesel vehicles; and Hyundai, Mahindra and Honda too, are expected to be ready with BS-VI-compliant diesel engines.

Besides, Maruti is even readying a Creta-rival with an expected launch around mid-2020. Not having a diesel in that segment could leave the carmaker exposed even further, as buyers in that segment and above typically have a higher likelihood of paying more.

As things stand, Maruti's shock announcement will undeniably have huge repercussions and the decision by the automotive heavyweight certainly casts a shadow over the future of diesel. But as India's largest carmaker, Maruti cannot afford to not have diesels in its portfolio and cede ground to rivals, so expect diesels to return one way or another.