New boss Herbert Diess outlines his grand plan for the company, including electrification, restructuring of brands and upcoming challenges. 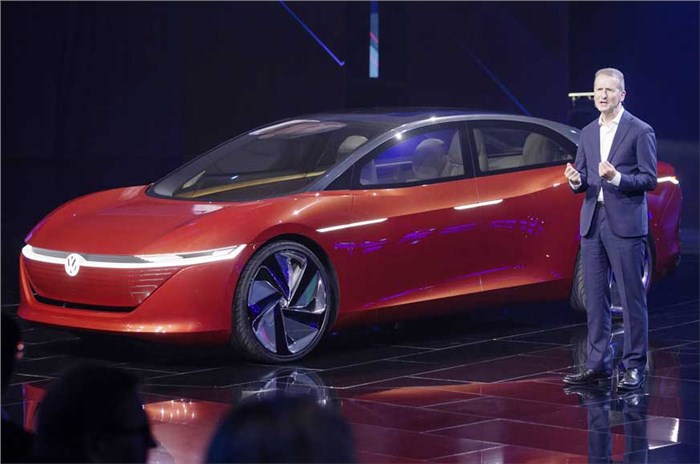 The new chief of the Volkswagen Group, Herbert Diess, has said that the company must change from “a slow, lumbering supertanker to a powerful group of speedboats.”

Speaking for the first time since his appointment last month, and addressing the carmaker’s shareholders at its annual general meeting, Diess outlined the importance of changing the corporate culture following the emission scandal and his plans for the future. In reference to his “supertanker” comment, he said, “Decision-making is too slow.”

He also acknowledged Volkswagen’s part in the mass decline in diesel sales. “As Europe’s biggest carmaker, we need to break new ground for diesel engines. It's due, in part, to us that diesel has wrongfully fallen into disrepute.”

Diess added that he thought bans on diesel, such as those that have been suggested in Germany, UK and Norway, were “the worst possible solutions”.

He claimed that the pollutant nitrogen oxide (NOx) had been cut by 30 percent on cars fixed so far, and added that 2,00,000 old diesel cars had been scrapped in Germany under scrappage schemes.

He admitted that the diesel crisis had been “a painful watershed”, and said: “We must and will do everything we can to make sure nothing like this ever happens again in this company.”

In order to be able to make decisions quicker and more efficient, Diess outlined a new company structure consisting of seven clusters that incorporate all areas of the business. These are:

“Our realignment must gather great momentum now,” said Diess. “New competitors are entering our established markets.” He added that “geopolitical uncertainty and unmistaken trend for protectionism” – no doubt alluding to Brexit and President Trump – were also cause for concern.

Diess also flagged the issues surrounding the new WLTP emissions tests coming into force on September 1. “We were prepared thoroughly for this change early on,” he said. However, given the wide range of models that need technical work and the necessary testing ( and availability of that testing) he warned the process could lead to temporary bottlenecks, although he added that everything was being done to “minimise the impact.”

According to Diess, the Volkswagen Group’s strategy is “the most far-reaching electrification initiative in the industry”. He described electric as the “engine of the future” and reiterated that the Group would sell three million EVs annually by 2025. There will be 18 new EV models by then, starting with the Audi E-tron, whose production starts in August. Diess claimed that the E-tron, which will rival the Jaguar I-Pace, will set a new benchmark, and that the upcoming Porsche Mission E and Volkswagen ID family would do the same.

Talking more broadly on 2018, sales revenue for the Volkswagen Group was up 5 percent in the first quarter. Diess predicted that there will be a moderate increase in sales this year compared to the 10.7 million unit sales of 2017. A profit margin of between 6.5 percent and 7.5 percent is predicted. “We expect a tailwind from our large model initiative," Diess said. "It’s the first full year for some new SUVs and will be further bolstered by the new Audi Q8, the Volkswagen compact car for China, the Audi A6 and the Volkswagen Touareg.”

Diess closed the meeting by saying this: “I expect 2018 to be another good year for the Volkswagen Group. We will make progress on being a better company in every aspect. My goal is to transform the company.”

Diess was appointed as head of the Group in April, replacing Matthias Müller, who had been at the helm since the Dieselgate scandal broke in September 2015. Diess has kept his existing role as chief of the Volkswagen brand.