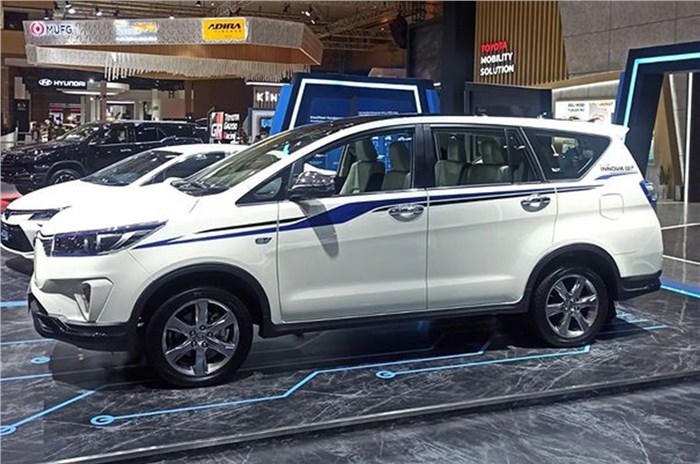 A few days ago, Toyota surprised us with its all-electric Innova at the Indonesian International Motor Show in Jakarta. The vehicle that was displayed was aptly named Innova EV concept; it looked close to production ready and generated a lot of consumer interest, not just in Indonesia, but also in India. However, Toyota Indonesia has confirmed that the vehicle won't go into series production, and we tell you why.

Will you get to buy an Innova EV soon?

Not really. Speaking to Autonetmagz, Anton Jimmi Suwandy, marketing director, Toyota Astra Motor, Indonesia, said, "The Kijang Innova Electric is not a car that we will sell. So this is just a concept, and its nature is just for engineering development." Suwandy further added that the Innova EV concept was being used for research and development for future EVs that are being readied for the region.

Toyota has a new engineering and development department for Asia-Pacific which works together for Toyota and Daihatsu vehicle brands, with both being popular in markets like Indonesia, among others.

Henry Tanoto, vice president director at Toyota Astra Motor Indonesia, too, confirmed that the Innova EV concept is a study.  He said, “Thus far, the purpose of introducing the Kijang Innova EV Concept has been a study and the concept has increased the popularity of electric vehicles in the community."

The Innova Crysta, like its predecessor, is based on Toyota's tried and tested IMV ladder frame architecture, which is designed to accommodate petrol and diesel powertrains. In such a platform, battery packs and the traction motor remain a major packaging challenge, thanks to the long ladder frame's long members and horizontal arms which limits space for the battery. Add to this the additional weight the frame brings which is a big penalty when it comes to a battery powered vehicle's range.

While the current Innova Crysta still remains on sale here, Toyota has begun testing an all-new MPV in India, which could get hybrid powertrain options as well. It remains to be seen if the new MPV replaces the Innova Crysta or is being sold alongside. Read more on that here.

What do you think about the Innova EV concept, let us know in the comments section below.