Surprise unveil by Toyota previews a full-electric version of the Innova that could go on sale in the future. 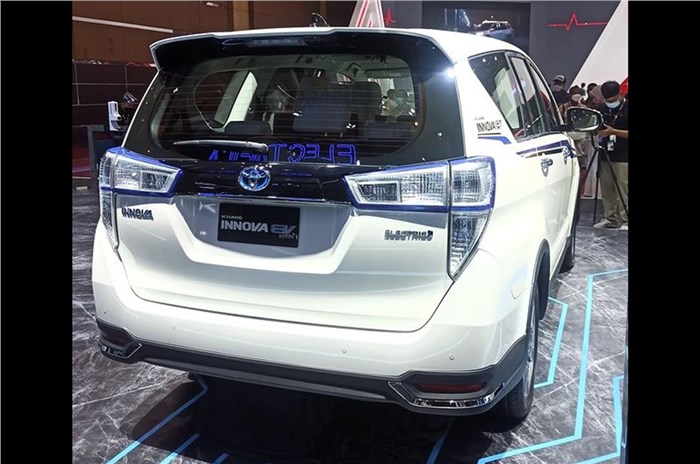 Toyota has taken the wraps off the Innova EV concept at the ongoing Indonesia International Motor show in Jakarta. While an official announcement is expected soon, first pictures of the car have surfaced.

Toyota Innova electric concept: What is it?

Official details are not out yet, but a first glimpse at the Innova electric concept shows Toyota's intentions for a future full-electric Innova. The concept seems to be based on the current-gen of the MPV, known as Innova Crysta to us, and does not look like the next-gen Innova that was seen recently in India.

The Innova Electric concept, as mentioned above, has the same bodyshell and basic design as the standard Innova, however, there are a few key differences. First up, the nose is slightly different with the grille being completley closed off and a slightly altered bumper. The alloy wheel design is also all new and there is a prominent "Electric" badge at the back which could mean this is a full-electric concept and not a plug-in hybrid electric vehicle.

Going by the pictures, we can see an updated instrument cluster with an eco meter. However, it is not digital, with analogue dials in use. Curiously, for an EV, a tachometer is also present.

The infotainment screen displays vehicle information like battery level, available range, speed, and currently engaged ‘gear’. The headrests get 'Innova EV' badging, while the rest of the cabin remains identical to the Innova.

The manufacturer has not announced any specifications of the electric MPV. Sources tell us that the Innova EV concept shown at Jakarta is just a study to gauge customer interest. The brand, however, will introduce a Innova hybrid in Indonesia first, followed by a market launch in India.