In addition to the 1.2-litre K12B petrol engine, the Toyota Glanza could also get the DualJet Smart Hybrid engine seen on the Maruti Suzuki Baleno facelift; to be launched in June 2019. 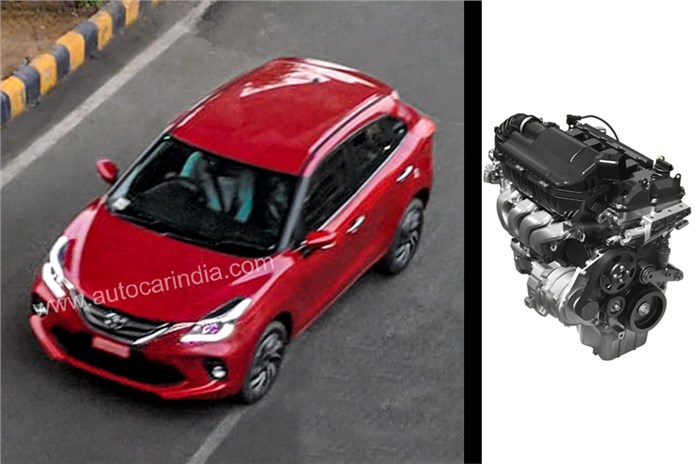 As its launch date nears, more information about the Toyota Glanza has started to trickle in. While spy pictures have confirmed the fact that the Glanza is merely a rebadged Maruti Suzuki Baleno, we haven’t yet uncovered much about its engine options or what the Glanza’s interior looks like. Now, though, we can tell you something about both these aspects. Fresh Toyota Glanza images have revealed its interior – and while there are no surprises there, we’ve also learned that the Toyota Glanza could get a mild-hybrid petrol engine as well.

Sources suggest that in addition to the Baleno’s 1.2-litre, K12B petrol engine, the Toyota Glanza could also get the option of the new, 1.2-litre K12C DualJet with the Smart Hybrid system. The DualJet engine is marginally more powerful than the K12B, making 90hp (compared to the K12B's 84hp) and 113Nm of torque. The Smart Hybrid system provides a torque-assist function that improves acceleration, a start-stop system that switches off the engine at idle to boost fuel efficiency and a brake-energy regeneration function that recharges the lithium-ion battery under deceleration.

More importantly, the DualJet Smart Hybrid engine is more fuel-efficient – 23.87kpl versus the K12B’s 21.01kpl. That said, with the Baleno, the DualJet variants cost a significant Rs 89,000 more than the equivalent K12B variants, so buyers will likely have to pay a similar premium to have this engine in the Glanza. It’s also worth bearing in mind that the DualJet Smart Hybrid is only available with a 5-speed manual gearbox in the Baleno, and it’s likely that only the Glanza's K12B will get the option of a CVT.

As for the Toyota Glanza’s interior, unsurprisingly, it’s almost exactly the same as that of the Maruti Suzuki Baleno facelift. From the dash layout and steering wheel to the colour scheme for the upholstery, the Glanza is practically the same as the Baleno on the inside, barring the Toyota logo on the steering. Even the 7.0-inch touchscreen for the infotainment system appears to be the same as the Baleno’s SmartPlay Studio unit, and it remains to be seen if Toyota makes any tweaks to the system’s interface or adds any new features for the Glanza.

The key differentiator for the Glanza will likely be its longer standard warranty. The Glanza is expected to come with a three-year/1,00,000km warranty as standard, like what’s offered on other Toyota models in India. The Maruti Suzuki Baleno, in comparison, comes with a standard two-year/40,000km warranty. Toyota is also likely to offer extended warranty plans with the Glanza hatchback, including the five-year True warranty package that can be opted for within the period of standard manufacturing warranty, and the seven-year Toyota Timeless Warranty package, which can be purchased after the standard warranty is over.

The Toyota Glanza's India launch is expected to take place in June 2019. And for those of you who are wondering, the Toyota Glanza's price will be a little higher than the Maruti Suzuki Baleno's, as Toyota will only sell the Glanza in two high-spec variants.

Do you think a mild-hybrid engine would be a good alternative for the Toyota Glanza, considering it won’t get a diesel engine option? Let us know in the comments.