All-new micro-SUV will sit below the Nexon as a rival to the Maruti Ignis and Mahindra KUV100. 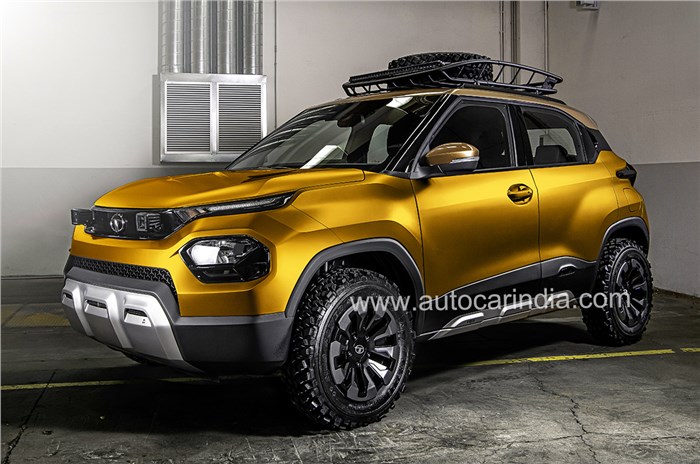 The Tata HBX (codename) micro-SUV is the brand’s next big launch for the Indian market. Set to be positioned under the Nexon, the production HBX will aim to cash in on the Indian customer’s demand for SUVs. Previewed by the HBX concept at Auto Expo 2020, the model has been spotted testing on numerous occasions, with a launch likely before the end of the calendar year. Here are some important facts about the HBX.

As has become very evident from the numerous occasions that the HBX has been spotted testing, the production micro-SUV will share a majority of its styling bits with the concept but with some details such as the bumpers, wheels and tyres toned down. The HBX will follow the family design language seen on Tata’s larger SUVs, like the Harrier and Safari, with a similar split-headlamp setup and Tata’s humanity line grille. Other design aspects of the HBX include squared-out wheel arches, upright proportions and, as noticed from latest spy pictures, prominent cladding on the bumpers and doors for that more SUV-like look, a floating roof effect, and dual-tone exterior colour options.

2. Tata HBX micro SUV: will be based on the same platform as the Altroz

While the Tiago and Tigor are based on Tata’s older platforms, the production HBX will be Tata’s second model to be based on the modular ALFA platform that debuted with the Altroz. In terms of size, the production micro-SUV is expected to be quite close to the concept’s 3,840mm length, 1,822mm width, 1,635mm height, and 2,450mm wheelbase. These numbers would make the HBX larger than Maruti Ignis and the Mahindra KUV100, its two closest competitors, prior to the arrival of the all-new Hyundai AX1 (codename) micro-SUV.

3. Tata HBX micro SUV: cabin will be toned down version from HBX concept

Spy shots of the cabin have indicated that it too will share much with last year’s concept, though with many of the details toned down. The basic layout of the dashboard is identical to that of the concept with its square air con vents and free-standing touchscreen, though bits like the compass beside the touchscreen and gold highlights will not be carried over.

The cabin will also share some elements with other Tata models and get the latest design steering wheel and the part-digital instrument cluster, with a digital tachometer sitting alongside an analogue speedometer. As with the Altroz, the HBX is expected to come with 90-degree opening doors that will allow for easier ingress and egress. Also, the hip point for the seats will be higher than in its platform sibling.

4. Tata HBX micro SUV: will only get petrol engines with manual and AMT gearboxes

The HBX is likely to get a choice of two petrol options. The base models are expected to use the 1.2-litre naturally aspirated petrol unit shared by the Tiago, Tigor and Altroz, while higher variants are expected to get a new 1.2-litre turbo-petrol engine. Unlike the unit from the Nexon and the Altroz iTurbo which uses port injection, the HBX’s mill is expected to feature direct injection technology. Gearbox options are expected to include a 5-speed manual and an AMT.

Also on the cards is an all-electric derivative, though it is still some time away.

Expect Tata to reveal more details on the production HBX – including the model’s name – in the coming months, with a launch expected to take place later this year. When launched, expect prices for the micro SUV to start under the Rs 5 lakh mark.