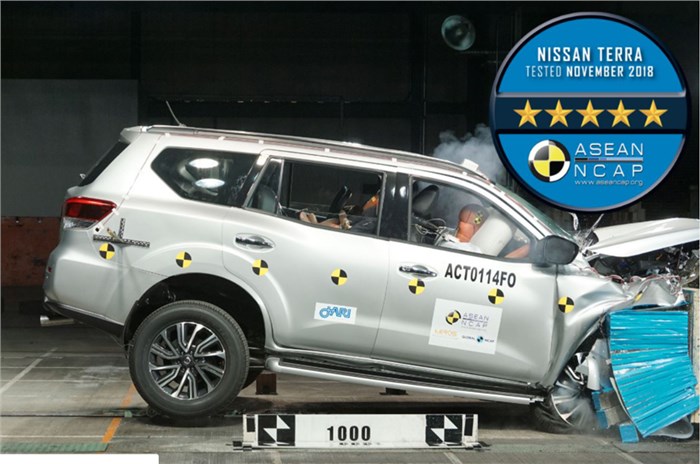 ASEAN NCAP has just awarded the Nissan Terra SUV a five-seat rating in its latest round of crash tests. The seven-seat SUV scored 32.18 points out of maximum 36 in Adult Occupant Protection, 12.85/16.00 in the frontal impact test, 16 out of 16 in the side impact test and 3.33 out of a maximum of 4 in head protection technology.

The Terra also scored well in Child Occupant Protection, achieving 40.74 points out of 49 in the front impact test, 8 out of 8 in the side impact test and 9.74 out of 13 in head protection technology.

The Terra for AESAN markets comes equipped with six airbags as standard, along with option safety kit such as ABS, ESC, blind spot warning and lane departure warning. The SUV is based on the same platform as the Nissan Navara pickup, which also shares its platform with Mercedes’ X-class pickup.

Nissan’s Terra is sold in markets like Philippines, Thailand, Indonesia, Brunei, Laos, Cambodia, Vietnam and Myanmar, where it faces rivalry from the likes of the Ford Endeavour (Everest) and Toyota’s Fortuner.

For the Indian market, Nissan has plans to launch its Kicks SUV (modified specifically for India) in January 2019 and has announced that it will have a major event every six months going forward. The Leaf EV has also been confirmed for an India launch.