Leaked video of Harrier reveals a sleeker design; expected to get the same petrol and petrol-electric hybrid engine options. 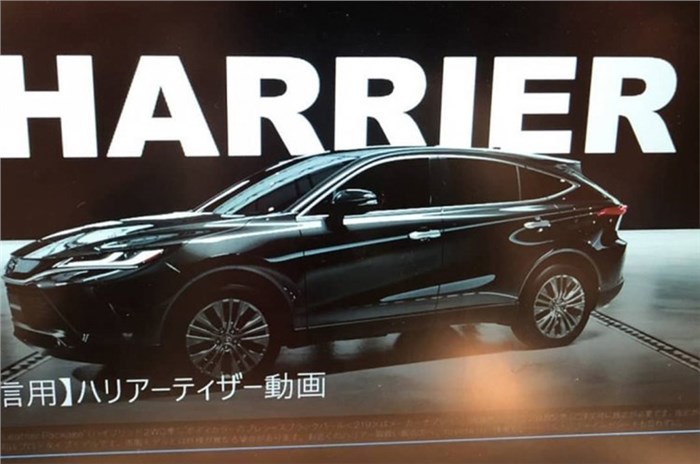 A video of the upcoming fourth-gen Toyota Harrier has been leaked online ahead of the model’s expected debut later this year.

Also, the use of the ‘Harrier’ name by Toyota in international markets was also why the Tata Harrier was showcased as ‘Buzzard Sport’ in Geneva last year.

Coming to the new 4th-gen version, the Harrier SUV gets a sleeker design with an elongated nose, a sleeker coupé-like roofline and a prominent shoulder line that rises towards the rear. Other design elements seen include sleeker LED headlamps with twin ‘J’-shaped LED DRLS similar to those on the new Corolla sedan, and a strip of chrome under the headlamps that stretches across the lower edge of the grille.

At the back, the Harrier gets a tailgate-mounted spoiler and new tail-lights connected via a LED strip. Also seen here is a rectangular badge on the lower part of the tailgate, and it could be the ‘Hybrid Synergy Drive’ badge typically associated with Toyota’s hybrid models. The 3rd-gen Harrier is sold globally in petrol and petrol-electric hybrid forms, so the possibility of a hybrid variant cannot be ruled out.

As with other new Toyotas, the 4th-gen Harrier is expected to be underpinned by the company’s TNGA platform.

Coming to the Indian market, the carmaker doesn’t intend to launch the SUV here. Toyota, however, recently revealed that it will introduce a new special-edition Toyota Fortuner soon. It is also working on a Fortuner facelift, with images of the undisguised and updated SUV recently surfacing.

The carmaker also announced the Corolla Altis and the Etios range won’t be upgraded to meet the new BS6 emission norms and hence will be discontinued.