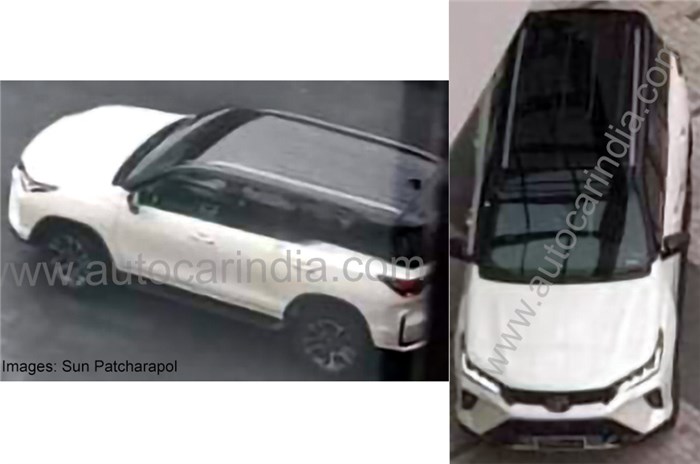 Ahead of its mid-2020 world premiere, the first set of images of the updated Fortuner has surfaced online. While the Fortuner facelift's India launch is still some time away, these images give us a clear idea of what to expect from the mid-cycle update of Toyota's popular SUV.

With this update, the Toyota Fortuner gets cosmetic restyling at the front, with a bumper and grille design that’s now in line with newer Toyota SUVs like the RAV4 and Raize. The grille is a lot slimmer and has glossy black bits instead of the chrome trim, and the bumper is more pronounced with triangle-shaped faux air intakes on each corner. Also, the headlight shape seems to be mildly altered with new inserts that make the refreshed Fortuner look sharper than the pre-facelift version. The gloss-black finish on the skid plate completes the visual update for the SUV.

The Fortuner facelift is also expected to get styling tweaks to the rear, including a mildly restyled bumper and tail-lamp inserts. There is no news on the interior upgrades for the updated Fortuner but it is safe to expect a better infotainment system and some minor changes.

As far as engines go, Toyota sells the Fortuner with multiple petrol and diesel options globally, and the list includes 2.7 and 4.0-litre petrol engines, and diesel engines with 2.4, 2.8- and 3.0-litre displacements, depending on the market.

The Fortuner SUV for India is likely to continue with BS6-compliant versions of Toyota's current 2.7-litre petrol and 2.8-litre diesel engines. The facelift could make its India entry sometime later this year, after its debut in the ASEAN market (primarily Thailand). However, before that, the carmaker will launch a new special-edition Fortuner, based on the pre-facelift version of the SUV, in the coming months.

In the Indian market, the updated Fortuner will take on the Ford Endeavour and the Isuzu MU-X, as well as other monocoque SUVs like the Volkswagen Tiguan, Honda CR-V, and Skoda Kodiaq.

Toyota sells over 24,000 units of Glanza since launch