Terra SUV, which was first shown as a concept in 2012, will be one of the models to come with the Leaf's drivetrain. 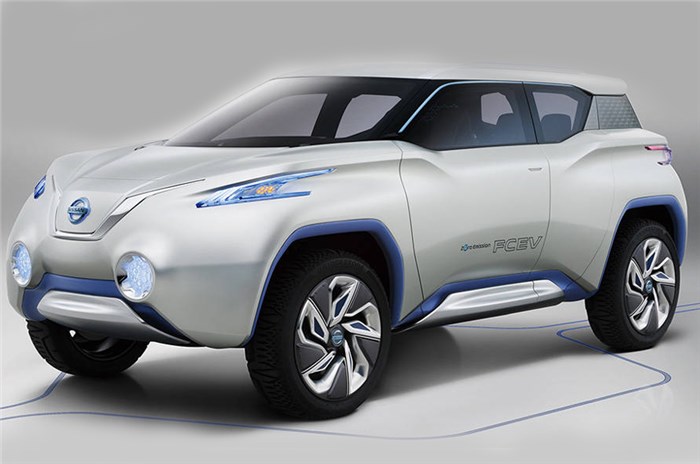 Nissan will use its next-generation Leaf's platform to produce additional electric models, in a bid to offer a more comprehensive range of zero-emission vehicles.

The Japanese brand’s electric line-up currently includes the Leaf, the e-NV200 Combi people carrier and e-NV200 van, but a recent patent suggests it will soon gain an SUV model called the Terra, which is expected to share its structure and drivetrain with the 2018 Leaf.

Nissan filed the Terra name with the Malaysian patents office at the start of August. In doing so, it brought back a name that hadn’t been used since 2012, when it was the title of an electric SUV concept first revealed at the Paris motor show.

That car used the first-generation Leaf’s electric drivetrain to power the front wheels but added a hydrogen fuel-cell system to power two motors at the back, making the car an all-wheel drive.

The production Terra will use Nissan’s vastly improved second-generation Leaf electric drivetrain, which is predicted to offer a range of up to 340 miles (547km) – more than double than that of the first-gen car. The gains will come thanks to new battery pack options that will enable Nissan to sell its models in a variety of specifications. It could also integrate an additional rear-drive powertrain to make it an all-wheel drive, like the concept.

The largest battery on offer on the Leaf is predicted to double the 30kWh lithium-ion pack found in the highest-spec version of the current car. The use of such a battery in the Terra would give it a headline range figure of more than 300 miles (483km). Lower variants will be priced lower to broaden the car’s appeal and help it to rank close to the Model 3. This will also mean the Terra will comfortably undercut more premium electric SUV models like the Jaguar I-Pace and Audi e-tron.

Nissan’s plan to spawn more models off of its upcoming Leaf platform mirrors a strategy that'll be used by fellow electric car maker Tesla. The American brand will build its future Model Y crossover on the Model 3’s base to drastically reduce development costs for the second model.