All-new Scorpio will go on sale in the coming months and could get the XUV700's powertrain options. 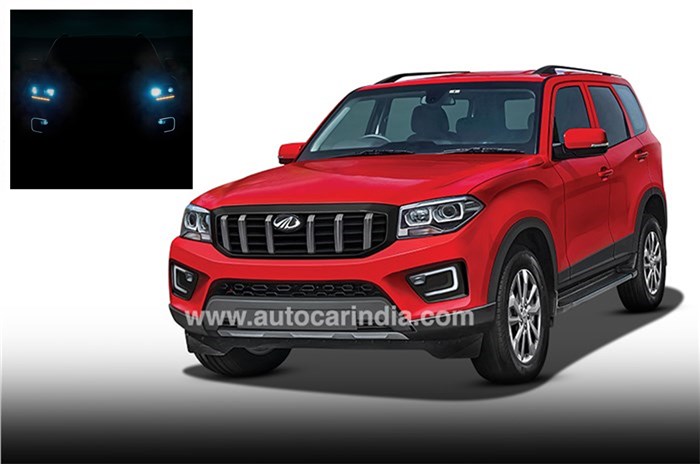 Mahindra has finally begun marketing activities for the upcoming Scorpio. The SUV, currently codenamed Z101 is expected to see a market launch in the coming months. Mahindra has been testing the next-gen Scorpio for over a year with test mules being spotted multiple times in almost every corner of the country.

Next-gen Mahindra Scorpio: what do the teasers reveal?

The upcoming Scorpio (Z101) will be Mahindra’s premium ladder frame-based offering and will have a fresh bodyshell and underpinnings. It will also get the new-gen engines that made their debut in recent Mahindra models like the Thar and the XUV700.

The teaser revealed today doesn’t show much except the new SUV’s headlamp design as well as bumper-mounted LED daytime running lights. However, spy shots confirm that the new Scorpio will have butch styling, an upright nose and will be instantly recognisable as a Scorpio. The new Scorpio will also most likely be the second Mahindra SUV to get the brand’s new logo, which made its debut on the XUV700.

The new Scorpio will come with 2.0-litre petrol and 2.2-litre diesel engine options, and Mahindra is expected to offer manual and automatic gearboxes on both engines, with four-wheel drive likely to be reserved for the top-spec variants.

New Mahindra Scorpio: current-gen Scorpio to be sold alongside

The original Scorpio was first launched back in 2002 and has had multiple cycle updates along with a full model change in 2014. Mahindra will continue selling the current-gen SUV alongside the all-new version as the current Scorpio still averages over 3,000 units a month and demand continues to be strong. Another reason why the current Scorpio won’t go off the shelf is due to its unique seating layout – side-facing seats on the third row, which won’t be available on the new-gen Scorpio.

Sources tell us that there is a very strong demand for the side-facing rear seats from smaller towns and, very specifically, the political and security segments. A third row with side-facing seats helps security personnel enter and exit the vehicle quickly, which is where the Scorpio has gained strong customer demand off late.

The launch of the all-new Scorpio is already delayed and we expect the new SUV to finally hit the showrooms in the coming months.