S Class Launch Edition to go on sale first; will be sold with two engine option and 4Matic all-wheel drive as standard. 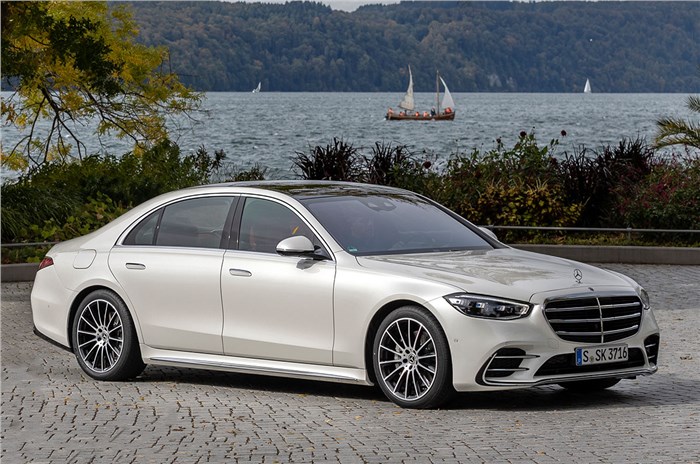 Mercedes-Benz India will launch the all-new S-Class (V223) on June 17, 2021, and also announce its pricing. The new S-Class will be introduced with a choice of six-cylinder petrol and diesel engines.

The fully imported Mercedes-Benz S-Class Launch Edition will come in two variants – the diesel 400d 4Matic and the petrol 450 4Matic. The S 400d will use the familiar OM656 in-line-six diesel engine used in other large new Mercedes in India and will develop 326hp and a notable 700Nm of torque. The S 450 petrol, too, will feature an in-line-six turbocharged unit, putting out 362hp and 500Nm of torque. All-wheel drive and a 9-speed automatic gearbox will be standard on both variants.

Like a few other Launch Edition models introduced earlier in India by Mercedes-Benz, the flagship S-Class sedan will be offered with a long list of equipment. Some of this equipment may or may not be available as options on the locally assembled models that will be introduced at a later date.

On the outside, the new S-Class Launch Edition will feature Mercedes’ new ‘Digital Light’ LED headlamps. The units are said to be capable of projecting symbols and guidelines onto the road surface. The Launch Edition will also come fitted with pop-out door handles and more importantly, rear-wheel steering. The latter should make the luxury limousine a lot more agile and easier to manoeuvre. The Launch Editions will feature AMG Line trim, giving the cars a sportier look with more aggressive design elements and alloy wheels.

On the inside, you will be greeted with a 12.3-inch instrument display sitting behind the steering, along with Mercedes’ new 12.8-inch portrait-oriented touchscreen taking up a significant portion of the centre console. The new OLED touchscreen will run Mercedes' latest MBUX system (NTG7) and also feature facial, voice and fingerprint recognition. Also, as with other MBUX-equipped Mercedes, the system will receive over-the-air (OTA) updates. The system will also feature 320GB worth of storage, along with 16GB of RAM. Additionally, features like 64-colour active ambient lighting, a Burmester 4D surround sound system, and massaging seats up front will also be unique to the Launch Edition.

The S-Class Launch Edition will get a bench seat in the second row, with the outer seats being electrically adjustable and getting a raising leg-rest and massage function, a chauffeur package that includes letting passengers adjust the co-driver seat from the rear, rear seat entertainment screens, a central tablet controller for various in-car functions. Another unique feature to the S-Class will be that the luxury limousine will come equipped with rear front airbags.

Buyers will have a choice of five colours to choose from – Designo Diamond White, Onyx Black, Anthracite Blue, Rubellite Red and Emerald Green. The former two will be available with either Macchiato Beige or Sienna Brown nappa leather upholstery, while the other three will be offered with either one, depending on the exterior colour.

As with its predecessor, the all-new S-Class will go up against its tradition rivals, namely the BMW 7 Series and the Audi A8, in the Indian market.

Aside from being available in standard long-wheelbase form, Mercedes will also be introducing its flagship Maybach S-Class luxury limousine in India in the months to come. These are expected to be followed up by Mercedes’ most recent all-electric vehicle, the EQS flagship sedan.

Santosh Iyer on the new Mercedes-Maybach GLS 600, growth of SUVs and more

What does Mercedes' direct-to-customer sales model mean for you?