Bids are well over three times the reserve price in the auction to aid COVID-19 relief efforts; auction deadline extended till September 29. 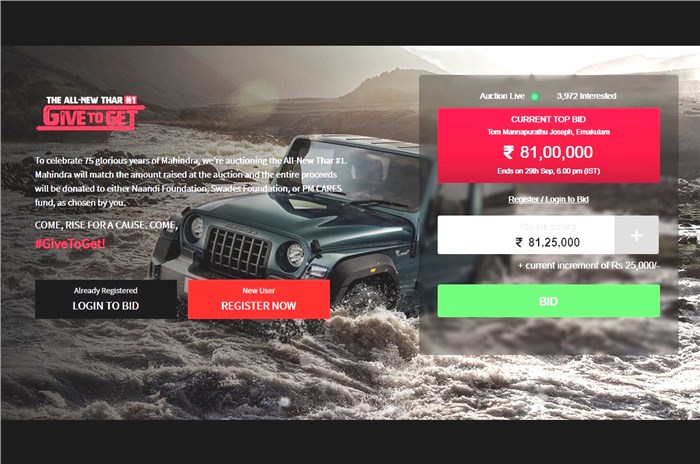 The new Mahindra Thar can’t come soon enough, going by the incredibly high interest in the second-gen 4x4. But before it goes on sale, the first unit of the 2020 Mahindra Thar is being auctioned to aid COVID-19 relief efforts, and on the opening day of the auction, Mahindra received bids of over Rs 80 lakh for the new-gen Thar.

With more than 3,800 individuals from over 30 Indian cities entering the fray to get their hands on the first unit of the new Mahindra Thar, bidding started at a reserve price of Rs 25 lakh. Those interested can place a bid in multiples of Rs 25,000, and over the course of Day 1 of the auction, bids crossed the Rs 80 lakh mark – well over three times the reserve price of Thar #1. At the time of this writing, the highest bid – Rs 81 lakh – has come from a prospective buyer in Kerala.

Another important point is that Mahindra has extended the deadline for the auction from September 27 to 6pm on September 29, 2020. At the end of the auction, the highest bidder will be notified and asked to choose the Thar variant and colour of their choice, and Thar #1 will feature customised badging with the owner’s initials, leatherette seats and serial number 1 on the VIN plate.

The bidder will have to pay part of the winning bid amount to Mahindra – for the Thar #1 – and the rest of the amount directly to one of three organisations engaged in COVID-19 relief work – Naandi Foundation, Swades Foundation and the PM CARES fund. Mahindra will also match the amount raised at the auction and donate it to one of the three organisations as chosen by the bidder.

The 2020 Mahindra Thar is based on a new ladder-frame chassis and debuts two new engines. There’s a 152hp, 2.0-litre 'mStallion' petrol which gets a 6-speed manual gearbox as standard and a 6-speed automatic as an option. The diesel engine for the new Thar is a 132hp, 2.2-litre mHawk unit, which is available with a 6-speed manual as well a 6-speed torque-converter automatic. Four-wheel-drive and a manual-shift transfer case are standard on all versions.

We also recently reported that Mahindra has greenlit a 5-door version of the new Thar for production. The five-door model will be an important addition to the Mahindra Thar line-up, as its rival-in-chief, the new-gen Force Gurkha, will also be available in 3- and 5-door forms. Additionally, the Suzuki Jimny is also set to enter India in five-door form.

The new Mahindra Thar’s interior will have features such as a 7.0-inch touchscreen with Apple CarPlay and Android Auto, roof-mounted speakers, a colour multi-info display for the instrument cluster, steering-mounted controls and cruise control. Safety kit includes dual airbags, ABS with EBD, ISOFIX child-seat mounts, hill-start and descent assist, ESP with roll-over mitigation, and the new Thar is also said to comply with upcoming pedestrian protection norms. It will be available in two variants – AX and LX – and Mahindra says it will be even more capable off-road than its predecessor.

What do you think will be the winning bid for the second-gen Mahindra Thar #1? Let us know in the comments.