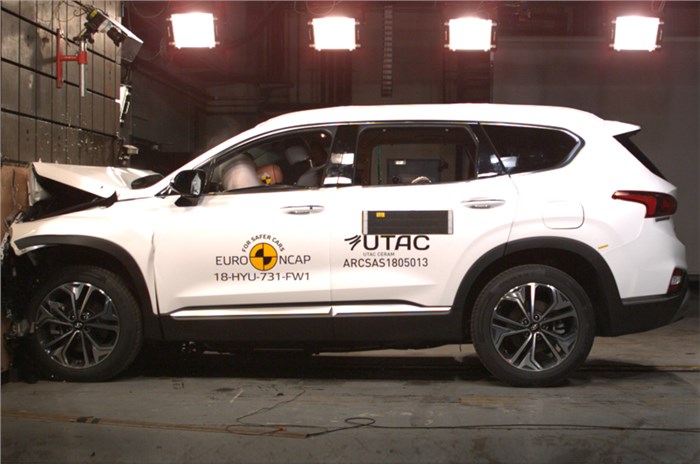 Hyundai’s current flagship SUV, at least in its international line-up, has scored a five-star rating in Euro NCAP’s crash tests.

With six airbags offered as standard along with plethora of other features Hyundai cars are known for, the new Santa Fe achieved 94 percent in adult occupancy and 88 percent in child occupancy. It also scored 67 percent for vulnerable road users and 76 percent for its safety assist systems.

While the Isofix child seat anchorages at the rear are offered as standard in the rear seats, the Santa Fe is claimed to be the first SUV in its segment to get the same in the front passenger seat as well.

The only area in which the Santa Fe was marked down was in the pedestrian safety department. “The protection provided by the bonnet to the head of a struck pedestrian was predominantly good or adequate, with some areas providing poor protection at the windscreen base and on the windscreen pillars”, the crash test agency said.

Scoring the highest points in the Global New Car Assessment Program (NCAP) is of cardinal importance these days among car manufactures across the globe. The safety ratings given by the NCAP to car models is one of the major contributing factors towards the sales.

The third-gen Santa Fe was discontinued back in September 2017 due to poor sales of the seven-seat SUV. While it was on sale, it rivalled the likes of the Toyota Fortuner and Ford Endeavour in our market. There are no plans to bring the fourth-gen model to India as the next-gen Tucson, which is expected to arrive in 2021, will be a seven-seat SUV and effectively serve as a replacement for the Santa Fe for the Indian market.