Honda Civic to launch in India on March 7, 2019, with two engine and gearbox options. 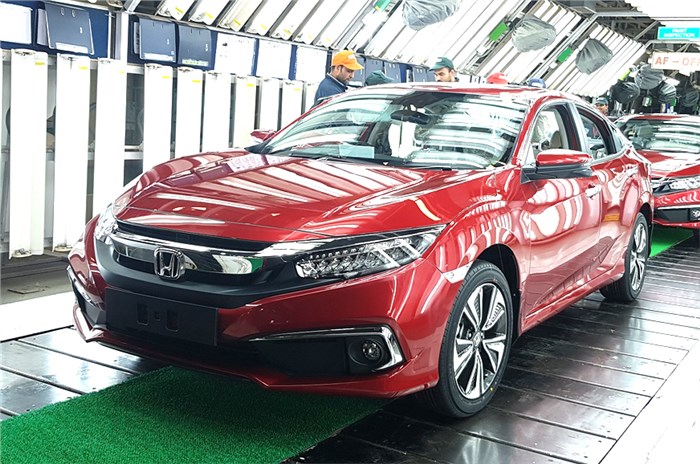 Honda Cars India has begun production of the all-new Civic at the brand’s Noida plant. Set to launch on March 7, bookings for the Civic are currently open at dealerships across the country.

Commenting on production of the brand's upcoming sedan, Rajesh Goel, Senior VP & Director, Honda Cars India Ltd said, “We are delighted to begin the production of All New Civic which will be launched on March 7. Since this has been a highly anticipated launch in India, we are receiving an outstanding response during the pre-launch phase.”

Goel also added that the Civic sedan's booking numbers in its first week had exceeded the figures the company expected to receive in three weeks. However, he did not reveal any concrete figures.

Featuring Honda’s latest design language, the new Civic will be offered with a choice of two engines – one petrol and one diesel. The petrol unit in question is a revised iteration of the brand’s 1.8-litre, four-cylinder i-VTEC motor developing 141hp and being offered solely with a CVT gearbox. The diesel motor is the same 1.6-litre unit that debuted in the CR-V last year and develops 120hp and 300Nm of torque. Unlike the SUV, though, on the Civic, the diesel motor is offered solely with a 6-speed manual gearbox.

Honda is also offering a fair bit of kit in its executive sedan, such as dual-zone climate control, an eight-way power-adjustable driver’s seat, a 7.0-inch touchscreen infotainment system with Android Auto and Apple CarPlay compatibility, a sunroof, LED headlamps, six airbags, ABS with EBD, electronic parking brake, stability control, and a lane watch system to monitor the left lane when the indicator is activated.

The new Civic will rival the likes of the Hyundai Elantra and the Skoda Octavia in the Indian market.