We pit the upcoming Honda Civic against its competition in the executive sedan segment like the Hyundai Elantra, the Skoda Octavia and the Toyota Corolla Altis. 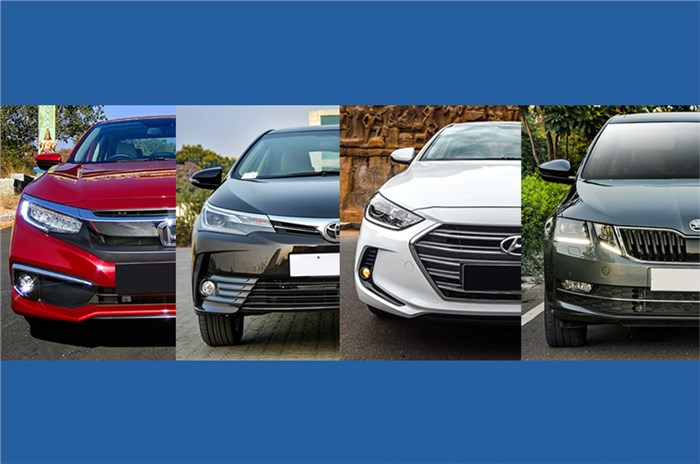 Honda’s bringing its Civic sedan back to India about six years after the eighth-gen model was discontinued. The 10th-gen Civic will face-off against familiar rivals when it launches in India on March 7, 2019, including the Toyota Corolla Altis, Hyundai Elantra and the Skoda Octavia. We’ve brought the four executive sedans together, on paper, to find out if the new Honda Civic will be a viable alternative to its competition.

First, take a look at the Civic's technical specifications:

Honda’s new Civic may be larger than the previous eighth-gen model on sale in India, but it's about the same size as its rivals. In fact, the Civic is the shortest model here; but also has the smallest boot space and fuel tank. The Civic may not be as manoeuvrable in the city as its competition due to its significantly higher turning circle. However, the Honda does have the largest wheels and thickest tyres of the lot. In terms of overall dimensions, the Octavia is the largest car, suggesting the most interior room, too. The Elantra, meanwhile, walks the line in-between – an average car amongst its competitors.

Even in the powertrain department, the Honda Civic doesn’t really stand out; the only model with lower output figures is the Toyota Corolla Altis. The Octavia rules this section, possessing the most powerful engines by a significant margin and having the option of two petrol motors. However, the Civic diesel is the most fuel-efficient model, while its petrol counterpart falls just short of the Toyota’s 16.7kpl figure. The Honda and Toyota also miss out on a diesel-automatic option. Like its dimensions, the Hyundai executive sedan's powertrain maintains the middle-ground against its rivals.

It seems like the Skoda Octavia is the winner in terms of features and the safety kit on offer. While the Civic does get a segment-first lane-assist camera, the Octavia has more airbags and traction control. The Skoda was also recently upgraded with VW’s Virtual Cockpit – at least in its top-spec L&K trim. The Corolla Altis misses out on kit that is expected to be offered in a car at this price point such as Android Auto and Apple CarPlay compatibility and a sunroof. Keeping with its trend, the Hyundai Elantra's features aren't exactly segment-leading, but it is quite well-kitted, overall.

Considering the Honda will be offered in a single fully-loaded variant, the Civic petrol’s estimated price seems to undercut the Octavia and Corolla by a small margin, while the Civic diesel is expected to be pricier than the Elantra and Corolla.

On paper, the Hyundai Elantra seems to offer the most value for money on this list, as it is the lowest-priced model and comes across as decently equipped, overall. Top-spec versions of the Octavia may be pricey but they are also the best-equipped and come with the most powerful petrol and diesel engines. A proper comparison and a full road test will be required before proclaiming a winner in the executive sedan segment, but with regard to specifications and features, the Civic doesn’t really stand out amongst its rivals.