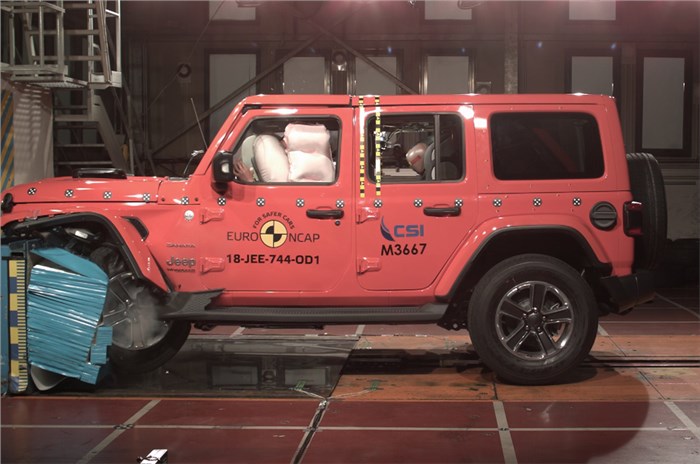 The Wrangler scored poorly due to a lack of safety features such as AEB, lane keep assist and more.

Euro NCAP has just released the test result of the latest iteration of Jeep’s Wrangler, with the SUV only getting a one-star rating. The rating, which is valid for the entire Wrangler range, was given because a lack of some essential safety features that other modern cars carry. Missing features include automatic emergency breaking, lane keep assist, blind spot monitoring and knee airbags, to name a few.

Jeep has claimed that the Wrangler will sport Autonomous Emergency Braking (AEB) in early 2019, however, the cars that were tested did not have AEB. According to the tests, the Wrangler achieved 50 percent in adult occupancy, 69 percent in child occupancy, 49 percent in vulnerable road users and 32 percent for safety assist features.

The Wrangle does, however, get some basic safety equipment such as six airbags, a speed assist system (which includes speed warning and speed limiters), a belt pre-tentioner and so on as standard.

The previous-gen model, which is on sale in India, is priced from Rs 58.74 lakh and comes with either a 284hp, 3.6-litre V6 petrol or a 200hp, 2.8-litre diesel motor. The new-gen Wrangler is expected to arrive in mid-2019 and is likely to introduce a new 2.0-litre turbo-petrol and a 2.2-litre turbo-diesel, along with an 8-speed automatic transmission.