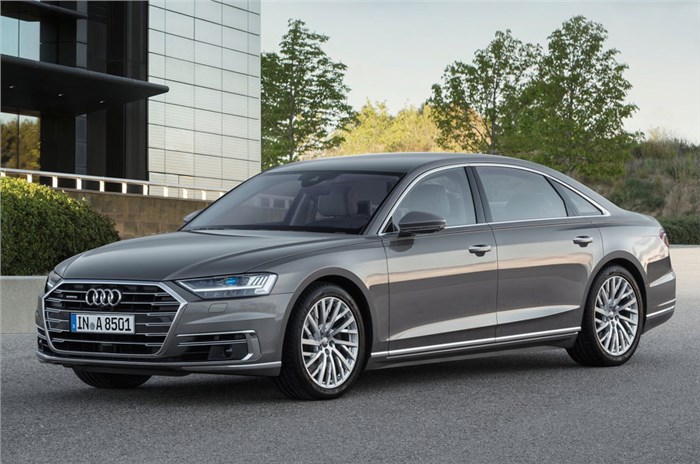 2019 has been a tough year for the industry, and Audi too. Aside from sales pressure, the company also faced delays with some of it's launches. The A8, which made its world premiere back in 2017 was finally slated to launch in India towards end 2019; and the luxury sedan will now come to our market in February 2020 – as informed by Balbir Singh Dhillon, head, Audi India.

The international-spec fourth generation of the A8 continues to be available in standard (A8) and long-wheelbase (A8 L) forms. Having grown 37mm longer and 17mm taller than the outgoing model, the latter configuration accentuates rear-seat comfort; and this is what is expected to make its way to our market, at a starting price of Rs. 1.5 crore (estimated, ex-showroom).

The upcoming A8 gets a much sleeker look (in line with Audi’s latest design language) as compared to its predecessor. The new-gen flagship model sports a prominent hexagonal grille up front, flanked by sleek HD Matrix-LED headlamps, adorned with chrome aplenty. The neatly designed rear-end features slim OLED tail-lamps connected by a full-width light bar, giving the car a wider-looking stance.

The interior sees many of the physical buttons swapped out in favour of digital surfaces and is awash with screens. Audi’s Virtual Cockpit instrument cluster sits in the centre console, replete witha 10.1-inch infotainment touchscreen and an 8.6-inch curved display for operating various climate control, seating, and multimedia functions.

Globally, the Audi flagship is available with a variety of powertrains. 3.0-litre V6 turbo-petrol and diesel engines putting out 340hp and 286hp respectively, serve as entry-level power units. A 460hp, twin-turbocharged petrol V8 and a 459hp plug-in hybrid.

The A8 L with a 3.0-litre petrol V6 is the model most likely to make its way to the Indian market, while availability of the other engine options is still not known.The global-spec car also comes with Level 3 autonomous driving technology; butgiven the lack of the infrastructure required for optimal L3 autonomy, it remains to be seen what level of tech would be on offer in India.

Initially, Audi is expected to bring the sedan here as a CBU. Upon launch, the luxury sedan will go up against the likes of the recently launchedBMW 7 Series facelift,as well as theMercedes-Benz S-class, Lexux LS 500h, andJaguar XJ.