We compare the newly-launched MG ZS EV facelift to its rivals, on paper. 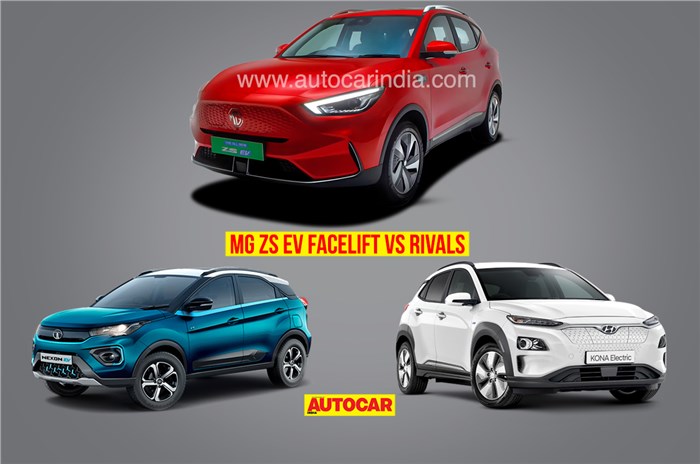 MG Motor India has launched the facelifted ZS EV in two variants – Excite and Exclusive. With this mid-cycle update, the electric SUV has gained a larger battery pack, refreshed styling and more features.

The updated ZS EV continues to rival the only other mass-market electric SUVs in India – the Hyundai Kona Electric and the Tata Nexon EV. Read on to see how they compare in terms of specifications and price.

In terms of price, the MG ZS range starts at Rs 22 lakh for the entry-level Excite variant and goes up till Rs 25.88 lakh for the range-topping Exclusive variant. Compared to the outgoing ZS EV, the facelift is Rs 50,000-70,000 more expensive, depending on the variant. The hike in price seems justified, given the updated looks, larger battery and more range that the ZS EV now packs in.

The ZS EV manages to undercut its main rival, the Hyundai Kona Electric, at the lower end. However, the Kona is more affordable than the ZS EV at the top-end. The Hyundai is offered in a single variant, with an optional dual-tone paint available. However, it’s worth noting that Hyundai will soon bring the updated Kona Electric to India.

The Nexon EV, meanwhile, is significantly cheaper than both the aforementioned SUVs. This is because the Nexon EV has a smaller footprint, smaller battery and range, and is the least powerful. However, it does come across as being good value for money, if it's cheap, green, intra-city motoring that you’re after.

In this comparison, the MG ZS EV is the largest in terms of the overall length and height. But it’s the Hyundai Kona Electric that has the longest wheelbase here, at 2,600mm. Meanwhile, both these SUVs ride on 17-inch alloy wheels.

Being a compact SUV, the Nexon EV is comfortably the smallest here. Interestingly though, the Tata is the widest of the lot, at 1,811mm, marginally beating out the MG. But the Nexon EV gets smaller, 16-inch alloys.

In terms of the electric motor, all SUVs here use the permanent magnet synchronous type. The ZS EV facelift makes the most power here, with 176hp, while the Kona Electric pushes out the most torque, at 395Nm. In comparison to the outgoing model, the ZS EV facelift is more powerful (by 33hp) but less torquey (by 73Nm). The Tata, meanwhile, lags behind both competitors, in terms of the power and torque output. All competitors here make use of a single-speed automatic transmission.

A big talking point on the updated ZS EV is the inclusion of a larger, 50.3kWh battery pack, up from the outgoing model’s 44.5kWh battery. The new 50.3kWh battery provides the ZS EV facelift with a claimed range of 461km, which is 42km more than the pre-facelift model.

The Kona Electric features a 39.2kWh battery pack which is said to provide it with a driving range of 452km. Meanwhile, the Nexon EV has the smallest battery pack, at 30.2kWh, and hence has the least range too, claimed to be 312km. However, Tata will soon update the Nexon EV with a larger, 40kWh battery pack, which should see it compete better with its rivals.

In terms of DC fast charging times, the ZS EV facelift can charge its battery till 80 percent in an hour with a 50kW charger, while the Kona Electric takes 57 minutes to do the same. The Nexon EV, like the MG, also takes an hour to charge 80 percent, but it does so on a 25kW charger.

That’s how the new MG ZS EV facelift compares with its electric SUV rivals on paper. However, how they fare in the real world can only be determined once we test them on the road. More on that soon.

Would you pick the facelifted MG ZS EV over the Kona Electric and Nexon EV? Let us know in the comments.