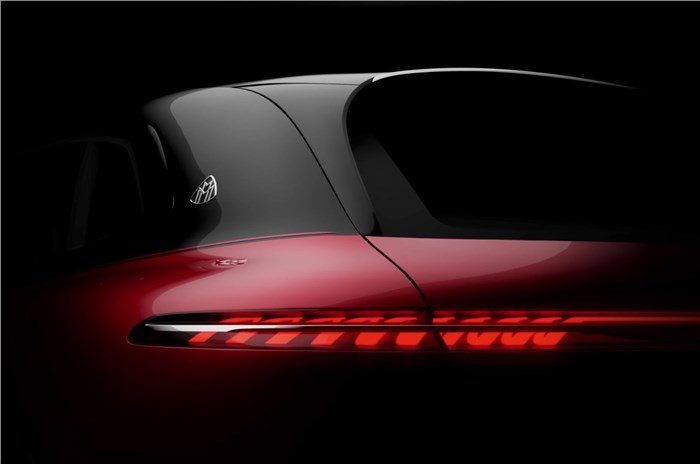 The all-electric EQS SUV, which is slated for a global reveal next year, will also be launched in a Maybach guise, Mercedes has confirmed.

The Mercedes Maybach EQS SUV has been teased by the German automaker. The high-end model will be based on the standard EQS SUV that will make its market debut next year.

Recently, Mercedes announced its plans to go all-electric by 2030, in certain markets. At the press conference, Britta Seeger, who is a member of the Board of Management at Daimler AG and responsible for marketing and sales of Mercedes-Benz cars, said, “What applies to the Mercedes portfolio also applies to our incredibly strong sub brands: we want to go electric. So, you can look forward to a top-notch, EQS SUV version of Mercedes-Maybach, for example.”

Though the carmaker did not give out any further details about the all-electric Maybach SUV, it did reveal a teaser image of the model.

From the image, we can see a two-tone paintwork featuring burgundy red bodywork with black pillars and roof, sleek horizontal LED taillights and the trademark Maybach logo on the D-pillar. Expect the model to be based on the standard EQS SUV, with a number of other design flourishes marking it out as the more exquisite option.

Maybach versions of Mercedes’ vehicles are known for upping the luxury and comfort quotient inside the cabin, compared to their “regular” counterparts. The teased model, then, will also follow a similar ideology.

Mercedes has announced that it will offer a battery-electric vehicle in all segments from 2022, and from 2025, the company promises to offer an EV option for all its models in global markets. It will also increase its focus on the Maybach and AMG sub-brands, which bring in higher profit margins.

Though it’s too early for the company to comment on the India availability of the Maybach EQS SUV, the prospect does seem promising. Mercedes India already offers the combustion-engined Maybach GLS SUV, and is also set to bring in the ultra-luxurious versions of the new S-Class. On the EV front, the standard EQS sedan is expected to go on sale in our market in early 2022.