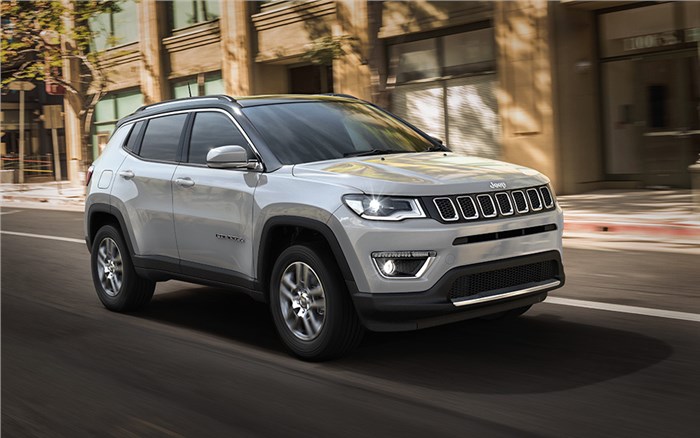 Jeep has launched its Compass SUV at Rs 14.95 lakh (ex-showroom, Delhi) with a choice of five trim levels – Sport, Longitude, Longitude (O), Limited and Limited (O). Jeep officially entered India last year with the launch of the iconic Wrangler and the Grand Cherokee – the latter offered as a diesel and also as a high-performance Grand Cherokee SRT variant. Later in the year, the automaker revealed the all-new Jeep Compass, a mid-size SUV, along with its intention to bring it to India. The Compass made its India debut earlier this year.

Here are the five things you should know about Jeep's first locally-assembled SUV.

1) Design and platform
The Compass shares a lot of its design cues with the current range-topping Grand Cherokee. Common design cues include squared-off wheel arches, the seven-slat grille, projector headlamps, high ground clearance and big alloy wheels. The Compass is based on the same platform (small, wide 4x4) as the automaker's entry-level SUV, the Renegade. The new Compass, however, features a longer wheelbase to improve cabin space.

2) Spacious and upmarket cabin
Inside, the new Compass provides the feel of a much larger SUV. The India-spec version gets plenty of metal brightwork, or bracketing, and features like Terrain Select dial, a choice of touchscreen infotainment systems (5.0-inch or 7.0-inch depending on variant) and dual-zone climate control to name a few. However, only the top Limited variants are offered with leather seats and the Selec-Terrain 4WD system, with the Limited (O) additionally featuring High-intensity Discharge (HID) headlamps and a dual-tone exterior.

3) New diesel powerplant
The Compass also features a Fiat-sourced diesel engine but, unlike the current 1.3-litre and 1.6-litre units used by Indian automakers, the Compass is powered by a new 2.0-litre, four-cylinder, Multijet II unit developing 173hp. Also on offer is a new 162hp, 1.4-litre, MultiAir, turbo-petrol motor offered with a six-speed manual or a seven-speed dual-clutch automatic gearbox. Deliveries for the diesel version will start early October, while Jeep will deliver the Compass petrol slightly later. A diesel automatic model is likely to hit showrooms by January with deliveries to start around February.

4) Off-road credentials
Jeep will differentiate itself from the crowd by retaining the off-road skills that are so central to its brand. The top-spec Limited variants come with a dedicated four-wheel-drive system and Jeep's Selec-Terrain Traction Management system that optimises the SUV for conditions like snow, sand, mud and rocks, along with a locking differential that works by braking individual wheels. The lower variants, though, will be front-wheel drive only.

5) Locally assembled
Unlike earlier Jeep products launched here, the Compass will be both manufactured and exported from Fiat's Ranjangaon plant outside Pune and features an extremely high level (65 percent) of localisation. This allows Jeep to price its SUV competitively. The automaker has had bookings open for a while now along with display and test-drive models at their showrooms. Bookings can either be made online or at dealerships.