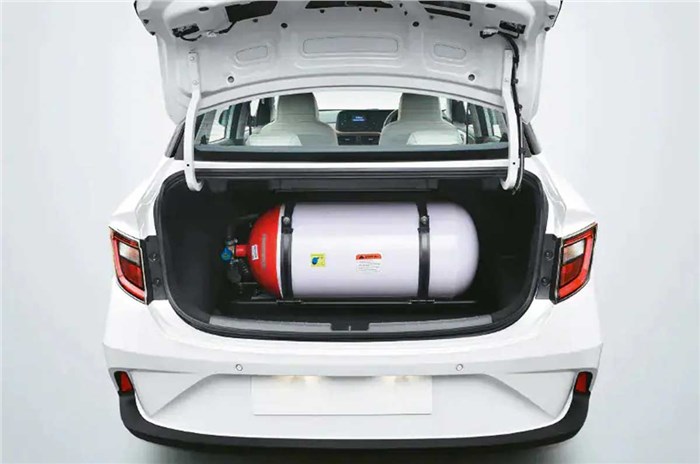 The carmaker believes the demand for CNG vehicles, at present, is only in the entry-level segments.

Hyundai Motor India, like Maruti Suzuki India, is strongly bullish on increasing sales of its CNG-powered cars. Despite the recent retail price drop in petrol and diesel, following the central excise duty cut and VAT by some states, CNG is still far cheaper and more affordable.

At upwards of Rs 90 a litre in most states, petrol is not cheap and that is a major reason why there has been a spurt in sales of CNG cars. Sales of factory-fitted CNG cars have seen a consistent and significant uptick. Between April and September this year,  CNG car sales recorded a robust 96 percent YoY growth, with total sales standing at 1,01,412 (as against 51,448 in the same period last year).

For Hyundai, CNG now accounts for a notable share for its three models – Santro, Grand i10 Nios and Aura – where the eco-friendly fuel is offered as a factory fitment.

“CNG penetration has been scaled up to 70 percent in case of the Aura compact sedan and it ranges between 25-30 percent for the Grand i10 Nios B+ segment hatchback,” Tarun Garg, director – sales, marketing and service, Hyundai Motor India, told Autocar Professional.

What works in favour of CNG is the higher fuel efficiency, which ends up being about 80-100 percent more than a similar petrol car. “Fuel efficiency becomes very important in the entry-level segment, which is very sensitive to the fuel prices,” added Garg.

In the April-September 2021 period, Hyundai sold 19,061 CNG-powered cars, which constitutes a 238 percent increase YoY (April-September 2020: 5,631 units), albeit on a low year-ago base. Importantly, of the total 1,01,412 CNG cars sold in the first half of this fiscal, Hyundai’s share is nearly 19 percent, which can only grow more with the rising demand for CNG models.

The carmaker has seen an uptick in sales of its CNG-equipped models, where numbers have doubled from 2,000 units monthly, a quarter ago, to over 4,000 units at present. The monthly average in H1 FY2022 was 3,176 units, albeit the pace picked up in August and September.

“Going forward, we should be looking at 5,000 units a month in the next couple of months, and while that target is for the existing range of CNG models, if need be, we will look at bringing CNG in other models as well,” said Garg.

While it might be looking at bringing CNG in SUVs – particularly compact SUVs – as well, for now, the Korean carmaker believes that it’s evident that the entry-level segment calls for petrol and CNG, while in case of SUVs, it’s primarily going to be petrol and diesel.