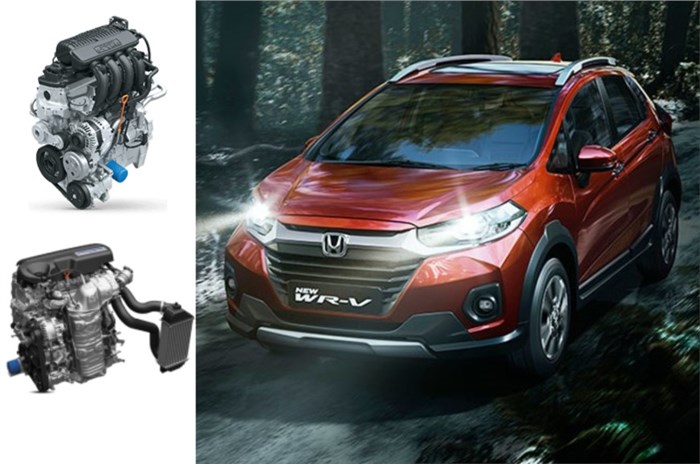 BS6 petrol and diesel engines in the 2020 WR-V are slightly less efficient than their BS4 counterparts. Here’s how the refreshed WR-V compares with its compact SUV rivals.

The Honda WR-V facelift is due to launch soon. While we recently got information regarding thevariants on offer and what features are expected with each variant, now, the 2020 WR-V’s mileage figures have also surfaced online.

How efficient is the BS6 WR-V?

The WR-V facelift continues to use the same 90hp, 1.2-litre petrol and 100hp, 1.5-litre diesel engines; both are paired with a 5-speed manual gearbox. Due to the updates to make the petrol and diesel engines comply with the more stringent BS6 emission norms, ARAI figures have dropped slightly. The BS6 WR-V petrol has a 16.5kpl figure while the BS6 WR-V diesel is rated at 23.7kpl. This means that the petrol’s mileage figure is 1kpl down while the diesel’s is 1.8kpl lower when compared to their respective BS4 counterparts.

How does the WR-V facelift compare with rivals on mileage?

The Honda WR-V doesn’t have a direct rival in India as there isn’t a cross-hatch of the same size and price available in our market. However, it traditionally goes up against compact SUVs such as the Maruti Suzuki Vitara Brezza, Tata Nexon, Hyundai Venue and the Ford EcoSport. While the WR-V also rivals the Mahindra XUV300, we don’t have BS6 mileage numbers for it and have excluded it from this comparison.

When it comes to the petrol-powered compact SUVs, the Honda WR-V sits near the bottom on every metric; the Hyundai Venue 1.2 petrol is less powerful but is more efficient, while the Ford EcoSport has the highest power output but the lowest efficiency figure, regardless of the transmission. From the manual gearbox-equipped models, the Hyundai Venue turbo is the most efficient, followed by the Nexon and the Venue 1.2 petrol. However, the Maruti Vitara Brezza is the most frugal petrol-automatic, thanks in part to the mild-hybrid system on offer with this version.

Compared to the diesel compact SUVs currently on sale (barring the XUV300), the BS6 WR-V diesel is more efficient by a 0.4kpl margin. It is followed by the Venue diesel, the Nexon and then the Ford EcoSport.

How will the WR-V facelift compare on price?

Regardless of the engine option, prices for the entry-level WR-V SV are expected to be higher than rivals, though that’s because it is quite a well-furnished model. In terms of features, it’ll equate to mid-spec variants of its compact SUV competition. However, the top-spec WR-V VX variant is expected to undercut the range-topping versions of its rivals, which could help Honda position it as a good value-for-money proposition.

Only a proper comparison will be able to tell; but on paper, the WR-V facelift seems like it may be able to carve its own niche in the segment.

Honda WR-V facelift likely to be available in two variants

New Honda City hatchback to be sold in multiple markets