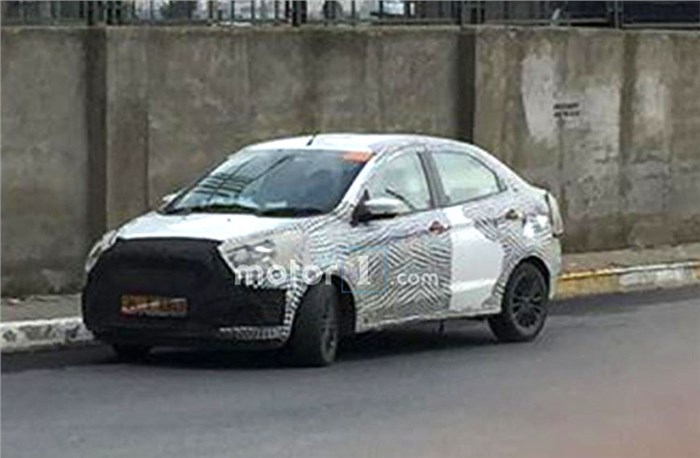 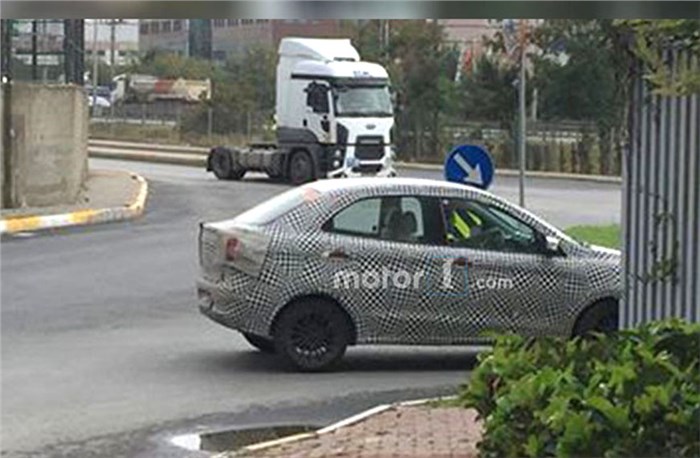 It is widely known that Ford has begun work on mid-life facelifts for its Figo range. The Figo hatchback and the upcoming Figo Cross have been spied in India and South America already. Now, a first set of spy shots of the refreshed Figo Aspire compact sedan have surfaced from Turkey.Ford is expected to launch the updated Fiesta range in India sometime next year.

Like the test mules of the Figo facelift and the Figo Cross, the Figo Aspire compact sedan’s test mule is also heavily camouflaged to hide the updates that its exterior will get. Apart from exterior styling tweaks, the car’s interior will also get changes, especially to its dashboard in order to accommodate a touchscreen infotainment system.

Ford will also add the new 1.2-litre Dragon petrol engine in the Figo Aspire sedan which will replace the current motor.The new Dragon series of engines will first make its debut in the refreshed EcoSport that will launch in the coming months. Ford will manufacture these new engines for the Figo, Aspire and the EcoSportin India.

The Dragon range is expected to come with technology like an integrated exhaust manifold, a rocker shaft with hydrodynamic bearings, a variable oil pump and a dual-valve independent valve control. It is also believed to feature individual ignition coils for each cylinder, spark plugs centralised in the combustion chamber and hydraulic tappets with rotor arms. This full-aluminium engine is believed to be over 10 percent lighter than the current four-cylinder Sigma motor.

While the Ford Figo hatchback sold globally has more or less the same body style and dimensions, the Aspire sedan is available in two different lengths. The first is a sub-four-meter version of the car manufactured and sold in India, and a few international markets like South Africa as well.While the second variant based on the Aspire compact sedan is sold in South America and is slightly longer, with a more proportionate and larger boot.

The model spied in Turkey looks to be based on the sub-four-meter Aspire compact sedan. Ford currently does not sell this model in Turkey; however, sighting of a test mule could mean the car will make its debut in facelifted form in the Turkish market in future.

Ford is also readying an all-new hatchback and a sedan – codenamed B562 and B563 – to take on the Hyundai i20 and the Honda City. Read more on thathere.