With the new Force Gurkha now launched, we compare it with the Mahindra Thar to see which performs better on paper. 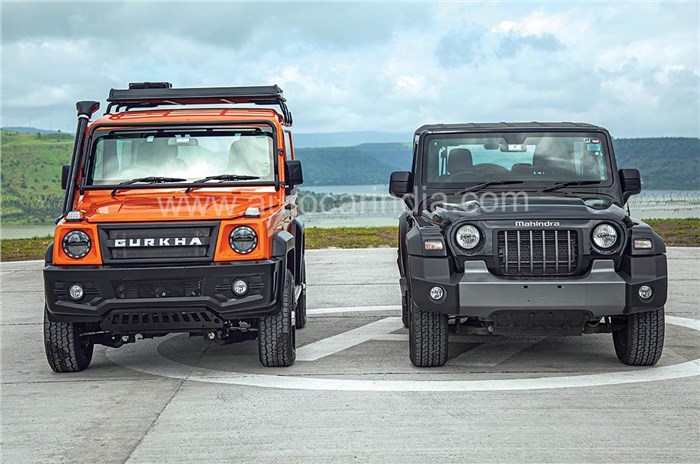 The new Force Gurkha has been a model that the off-roading community in India has been waiting for, ever since it was unveiled at the 2020 Auto Expo. Force Motors has now finally launched the new Gurkha, with deliveries set to commence from October 15. However, the Gurkha is not the only body-on-frame, three-door, made-in-India off-roader in our market, as the Mahindra Thar arguably set the groundwork for this niche segment. Now that we have the technical specifications for both, it’s only fair that we compare the two, to see which comes out on top, on paper at least.

As we can clearly see from the table above, while the new Gurkha is longer (by 131mm) and taller (by 231mm) than the second-gen Thar, the latter is wider (43mm wider), has wider front and rear tracks and has a longer wheelbase (50mm more). So, while the wider tracks and longer wheelbase should make the Thar more stable, the Gurkha’s interior space should benefit from it being longer and taller.

We can also get a cursory understanding of both these models’ off-road capabilities by looking at their various off-road angles and ground clearances. In this department, the Thar beats the new Gurkha in every category, as it has a better approach angle (by 4.8 degrees), departure angle (by 3.8 degrees), breakover angle (by 2 degrees) and has better ground clearance (by 21mm). The new Gurkha gains back some ground in with its higher water wading credentials (rated at 50mm more) and its tighter turning circle (less by 0.5 metres), that should give it the edge in manoeuvrability.

The new-gen Thar has a considerable weight advantage over the Gurkha, as the Thar is roughly 390kg lighter than its rival.

However, it must be said that these numbers only show half the picture, and you will have to wait till we compare the two off-roaders in the real world. Also, worth noting is the fact that a larger Gurkha 5-door is also set to be launched soon.

Looking at these diesel powertrains, it is the Mahindra Thar that impresses with its 130hp, 2.2-litre mHawk turbo-diesel engine. Not only does it make 39hp more than the Gurkha’s Mercedes-derived 2.6-litre unit, but it also puts out 50Nm more torque. In terms of gearbox options, the Gurkha is solely available with a 5-speed manual, while the Thar offers a 6-speed manual as well as a 6-speed automatic gearbox, giving the Thar another advantage.

It’s a shame Force has dropped the 140hp, 2.2-litre turbo-diesel from the old Gurkha Xtreme, as that would have been a closer match for the new Thar’s diesel engine.

Both models come fitted with transfer cases that let you shift from two-wheel drive to either four-wheel drive high or low ratios, as standard. The Thar also comes with a host of electronic safety features like hill start assist, hill descent control and ESC-based brake lock differential at the front and auto mechanical locking differential at the rear. As convenient as these features are, this system is managed entirely by the on-board computers and doesn’t give you any individual control. The Gurkha on the other hand provides much more control as it allows you to manually lock the front and rear differentials, though it lacks the other electronic safety nets.

Do note, we have not taken the Thar’s 150hp, 2.0-litre turbo-petrol engine into consideration in this comparison as the Gurkha is only offered with a diesel powerplant.

Coming to the pricing, the new Force Gurkha is priced more or less on par with the Hard-top diesel-manual Thar LX – they’re priced about Rs 10,000 apart. Additionally, the Thar LX gets the option for an automatic gearbox priced at Rs 15.08 lakh (ex-showroom, Delhi) for the Hard-top model. Buyers can also option the Thar with a soft top which lowers the price by Rs 10,000.