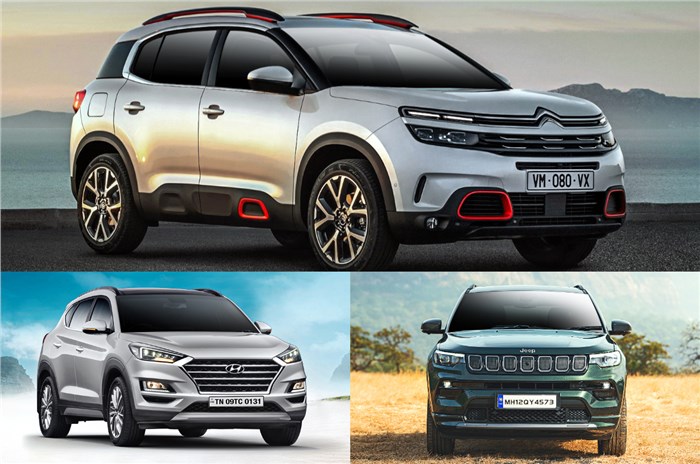 We pit the new Citroen C5 Aircross against its competition to see how they compare on paper.

Citroen has made its entry into the Indian market, launching the C5 Aircross at an introductory price of Rs 29.90 lakh (ex-showroom, Delhi). The SUV is available in two variants with one engine-gearbox combination. Read on to see how the new Citroen C5 Aircross compares with rivals like the Jeep Compass and Hyundai Tucson, in terms of specifications and price.

In terms of dimensions, all these midsize SUVs measure around 4.5m in length. However, it’s the C5 Aircross that is the longest overall, the widest, the tallest and has the longest wheelbase in this comparison. Compared to the Hyundai, the C5 is 20mm longer, 119mm wider, 50mm taller and has a 60mm longer wheelbase. The Jeep Compass is easily the smallest SUV here as it lags behind the others in all dimensions.

Owing to its large dimensions, the Citroen also has the largest boot in the comparison, at 580 litres, which can be expanded to 1,630 litres by folding down the rear seats. In their respective top-spec trims, all three SUVs get 18-inch alloy wheels.

As the Citroen C5 Aircross has been launched with a solitary diesel engine, we will compare it with just the diesel engines of the Compass and Tucson. All three SUVs are powered by turbo-diesel engines, displacing around 2 litres. However, it’s the Tucson’s unit that produces the most power, at 185hp, and the most torque, at 400Nm. Citroen’s engine too puts out 400Nm of torque, but it is 8hp down on the Tucson. The Compass’ engine has the least output meanwhile, with 170hp and 350Nm of torque.

Unlike the C5 Aircross, the Jeep Compass and Hyundai Tucson also get petrol engine options. The Compass gets a 163hp, 1.4-litre turbo-petrol engine, which can be had with either a 6-speed manual or a 7-speed dual-clutch automatic, while the Tucson gets a 152hp, 2.0-litre petrol engine that’s paired with a 6-speed torque converter automatic as standard.

With a starting price of Rs 29.90 lakh, the C5 Aircross comes across as quite expensive. The Citroen’s base Feel variant is priced higher than even the fully-loaded, all-wheel-drive diesel variants of the Hyundai Tucson and the Jeep Compass. However, the C5 is the largest of the lot in terms of dimensions, which translates into good cabin space, and it is very well equipped with features as well. Furthermore, being a new SUV with a unique design, the Citroen will also stand out from the crowd of SUVs.

The Jeep Compass, meanwhile, is the most affordable option in this comparison. The Jeep’s range starts lower than the Tucson’s, but goes higher at the top end, for both the petrol and diesel versions. The Compass is also offered in more variants than the Tucson.