The all-new SL is expected to share its drivetrains, chassis, electrical architecture and other key components with the second-generation AMG GT, due in 2023. 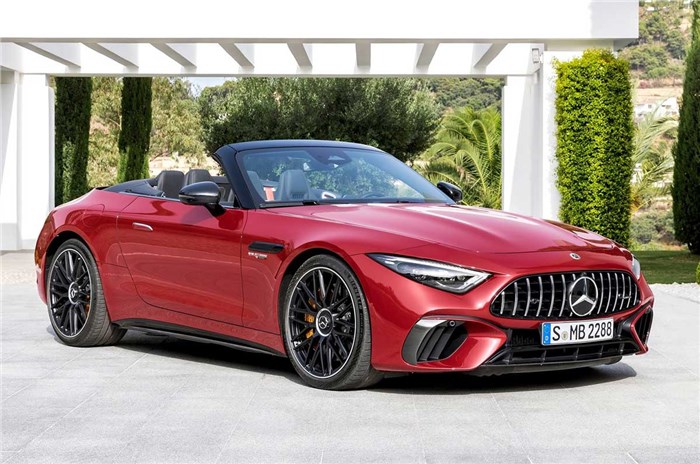 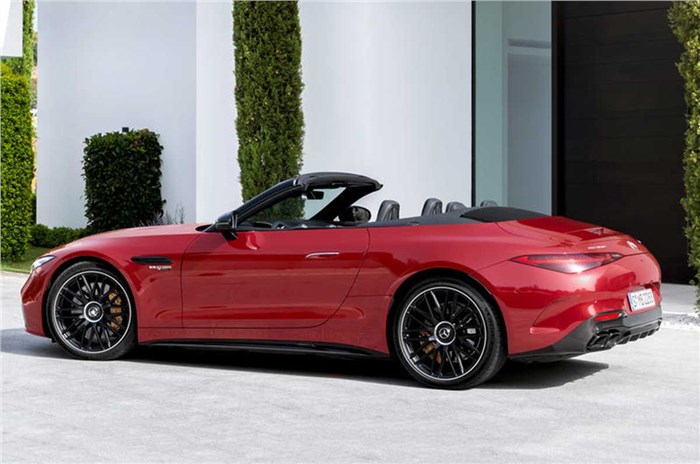 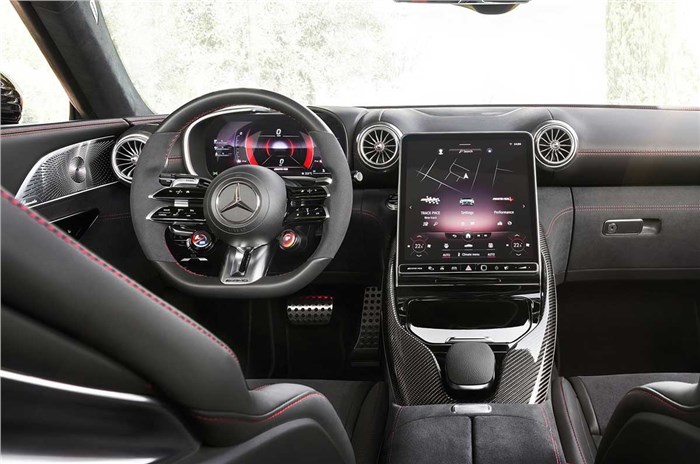 Mercedes-Benz has released the first set of pictures and details of the all-new seventh-generation SL roadster that is set to go on sale overseas early next year. The new roadster brings back the fabric roof and 2+2 layout of earlier incarnations and receives four-wheel drive and four-wheel steering as standard.

The R232-generation SL has been developed by the AMG performance car division and is expected to share its drivetrains, chassis, electrical architecture and other key components with the second-generation AMG GT, due in 2023. Arriving 67 years after the original SL was first introduced in Mercedes-Benz's line-up, the new model adopts a totally new look, with more overt cab-backwards proportions than its predecessor.

Similarities with the smaller GT Roadster are evident in the overall silhouette. But, Mercedes-Benz’s design team has sought to give the new SL its own individual appearance using unique detailing like a heavily structured front bumper, AMG’s signature Panamericana grille with louvres that open and close depending on cooling requirements and angular. The grille merges with the CLS-style adaptive LED headlights that finish off the aggressive-looking front end, which is far removed from the outgoing model. 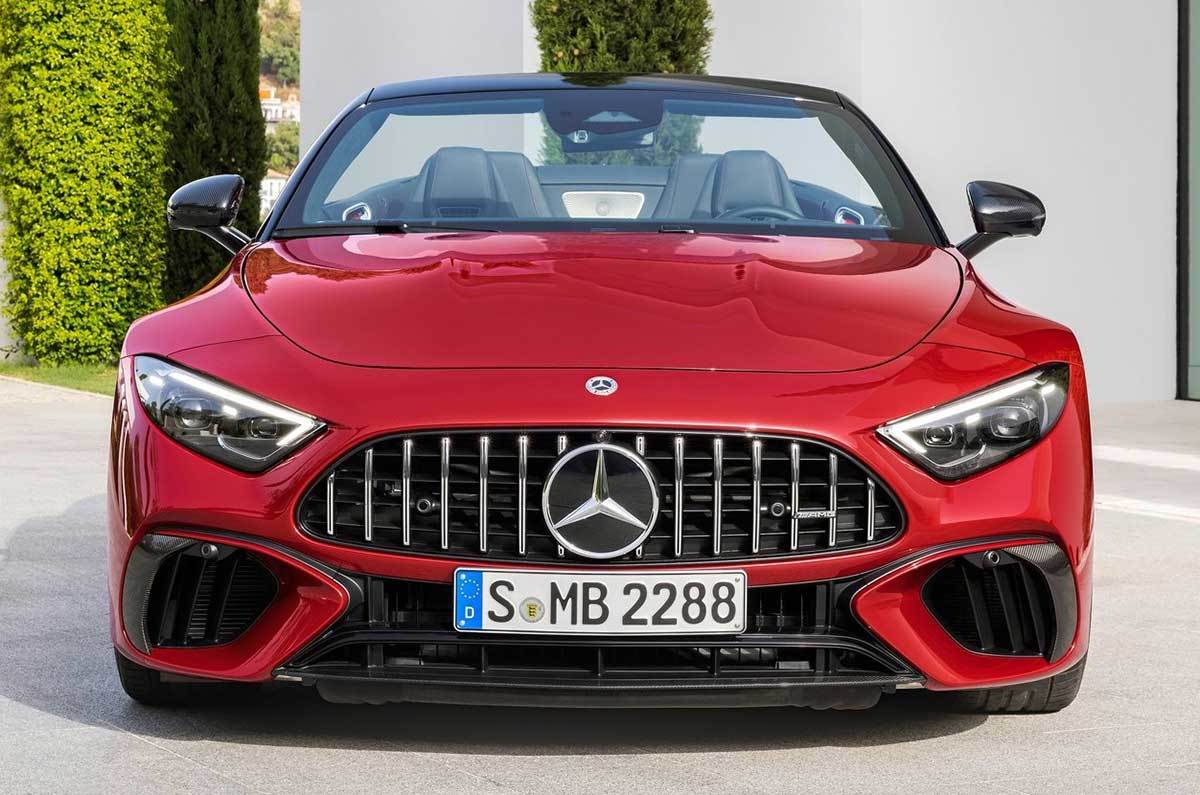 Further back, the long, probing bonnet with two prominent power domes is heavily reminiscent of earlier SL models. It stretches back to a heavily raked windscreen featuring a sturdy frame as protection, along with two pyrotechnic-deployed structures fired from the rear bulkhead, in the case of a rollover. The wheel arches protrude from the body, housing alloys ranging from 19- to 21-inch in diameter. 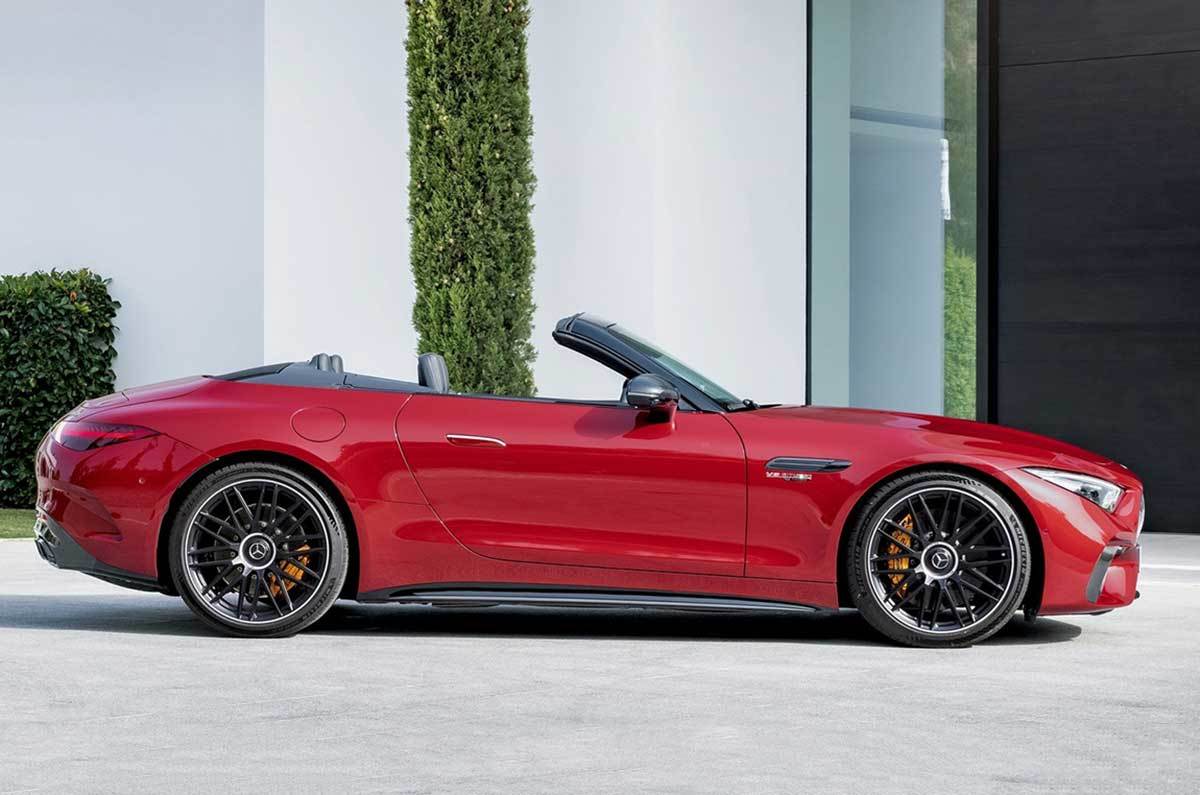 For the first time since the fourth-generation SL, the new model features a triple-layer fabric roof. Claimed to weigh 21kg less than the metal roof used by the previous generation, it is operated by a switch on the centre console or via the infotainment display – which also shows an animation of the drop-top's operation.

Mercedes-AMG has confirmed two initial V8-powered SL models – the SL55 4Matic+ and SL63 4Matic+ – although our sister publication Autocar UK can confirm that others, including a petrol-electric hybrid-powered SL63e, are under development before being unveileded in the next 12 months.

The entry car, which brings back the '55' name to an AMG model for the first time since the G55 ceased production in 2012, is powered by AMG’s M176 engine that's used by a number of models in the Mercedes-Benz lineup. The 469hp, 700Nm, twin-turbocharged 4.0-litre V8 unit delivers 2hp more than the twin-turbocharged 4.7-litre V8 used by the old SL500.

In combination with a standard nine-speed torque-converter AMG Speedshift MCT gearbox and a fully variable AMG Performance 4Matic+ four-wheel drive system, the less powerful version of the new SL’s V8 engines is claimed to catapult the SL55 to 100kph from standstill in 3.9sec with a top speed of around 295kph. 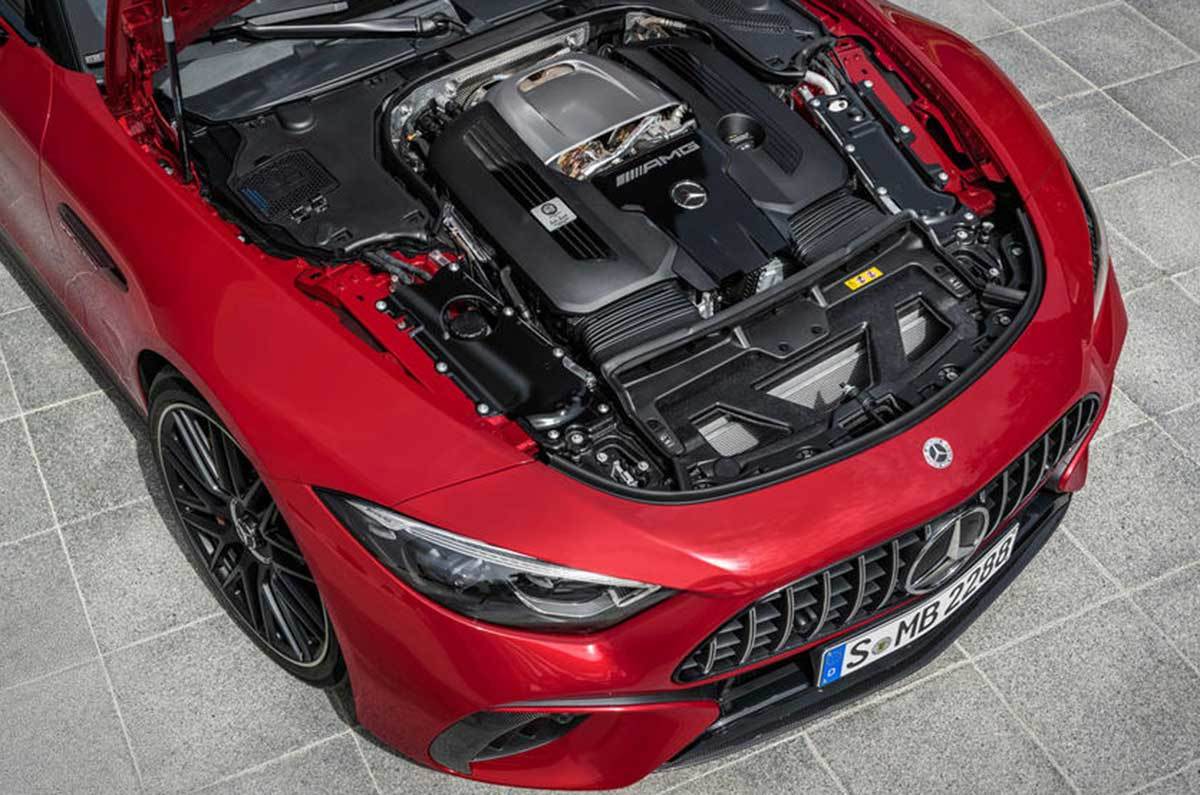 The SL63 receives AMG’s more heavily tuned M177 engine. Featuring the same twin-turbocharged 4.0-litre V8 specification as the M176 but with different internals, like a larger air manifold and greater boost pressure, it develops 577hp. Drive is channelled through the same nine-speed gearbox (complete with the same ratios and 4.8:1 final drive) and four-wheel drive system, giving the new headlining SL model a claimed 0-100kph time of 3.6sec and around 315kph top speed.

Inside, the SL follows Mercedes-Benz’s recent arrivals – namely the EQS, S-Class and C-Class – in adopting a prominent, 11.9-inch vertically oriented touchscreen, which can be adjusted to sit at angles between 12deg and 32deg. It runs the latest generation of Mercedes' MBUX operating system and offers a range of display choices – including bespoke AMG and soft-top display modes. 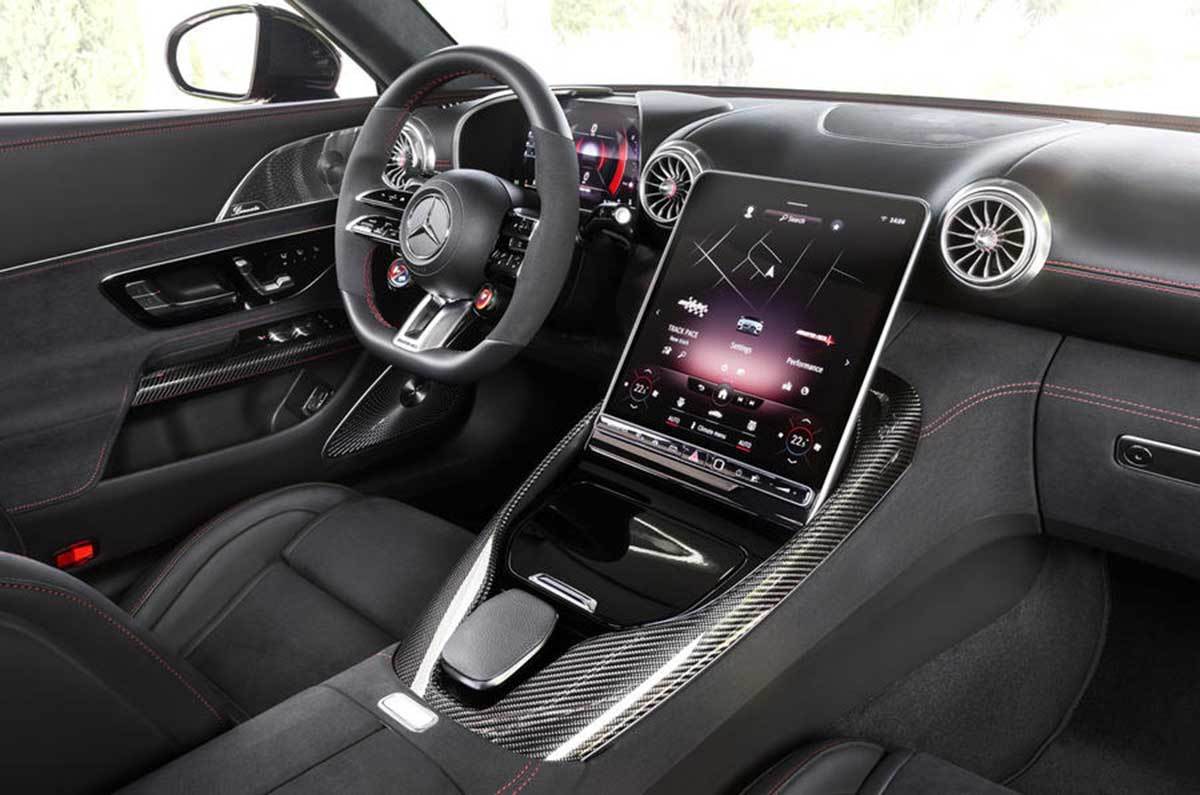 The touchscreen is paired with a 12.3-inch LCD driver display and an optional heads-up display behind the AMG twin-spoke steering wheel. The optional AMG Track Pace programme serves as a 'virtual race engineer', recording over 80 sets of data including speed, acceleration, steering angle and brake force up to 10 times per second while on the track. 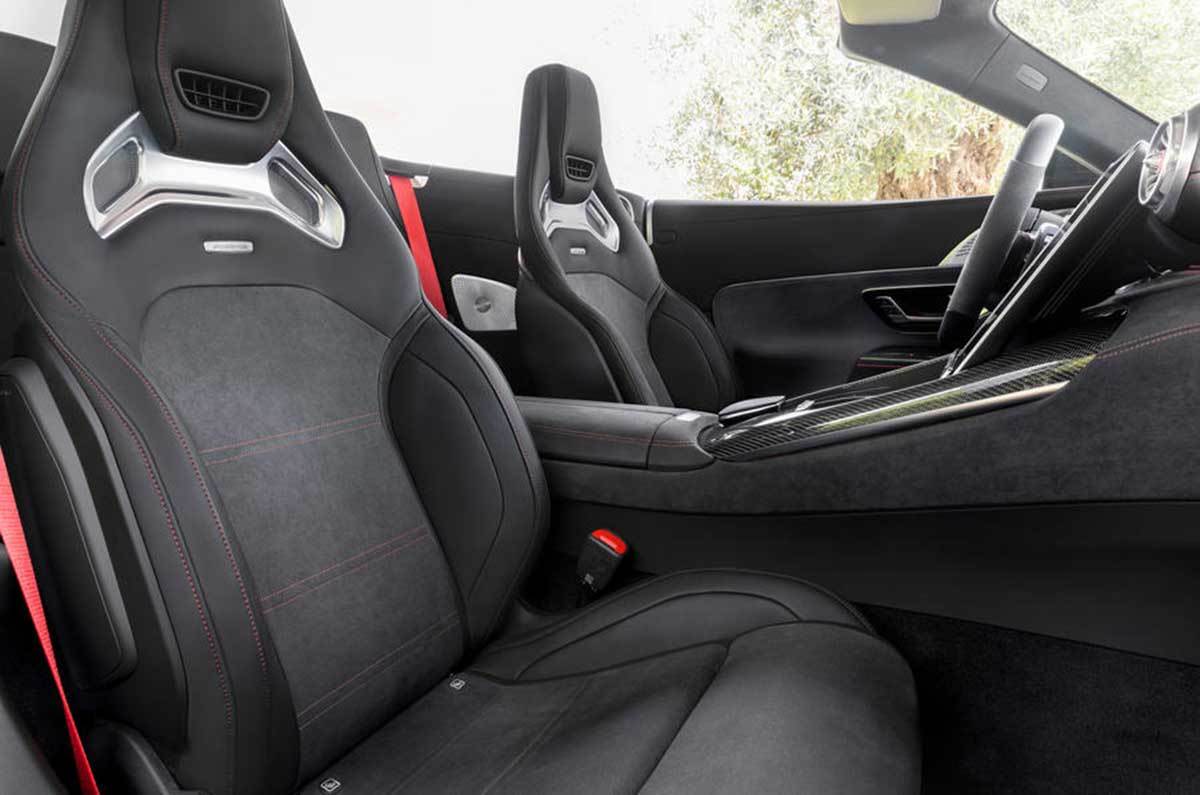 Elsewhere, the SL gets AMG's turbine-style air vents, aviation-inspired instrument panel, electrically adjustable sports seats and an Airscarf function that directs warm air towards the head and neck of front occupants to combat buffeting when the roof's down.

New Mercedes-AMG SL Roadster: will it launch in India?

The SL has been a popular model in India with quite a few examples of almost every generation present in the country. Mercedes-Benz did not sell the previous-gen SL in India and there is no news of this generation hitting our shores either.