Apart from the ‘standard’ M8, the M8 Competition churns out 624.5hp 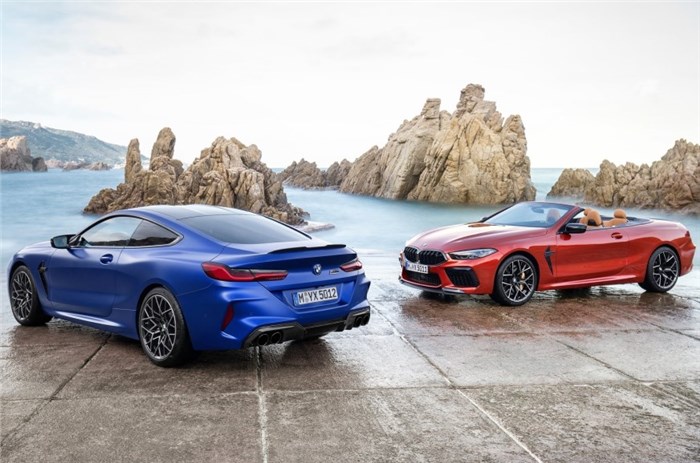 The new four-wheel-drive BMW M8 Coupé will become the most powerful and fastest two-door model yet sold by the German carmaker. Revealed for the first time in Competition form, ahead of its 2019 Frankfurt motor show reveal, the latest of performance models from BMW’s M division builds on the strengths of the M850i, with a powertrain shared with the M5 and a chassis honed during a 24-month development programme at the Nürburgring.

The now-familiar twin-turbocharged 4.4-litre V8 offers up to 624.5hp and a top speed of 305.7kph, in top-of-the-line Competition guise, thanks to tweaks to the induction system and more rigid engine mountings than the standard M8. Peak power is produced at 6,000rpm, with 749.7Nm of torque delivered between 1,800 and 5,800rpm. BMW quotes a 0-100kph time of 3.2sec for the M8 Competition in Coupé form, with the Convertible one-tenth slower over the same sprint.

The regular M8 uses a slightly detuned version of the V8 producing 600.2hp – the same as the standard M5. Peak power appears at 6,000rpm and the same 749.7Nm of torque as the Competition model is delivered between a slightly narrower rev band, from 1,800-5,600rpm.

The M8’s power figure is 69.9hp more than that of the turbocharged 4.4-litre V8 used by the M850i, which shares the M8’s torque figure. The 0-100kph time for the standard M8 is 3.3sec for the Coupé, and 3.4sec for the Convertible. Both weigh 1,885kg and are limited to a nominal top speed of 249.4kph, although, this can be raised to 305.7kph, with an optional Driver’s Package that also brings tyres with a higher speed rating.

As with the M850i, the Convertible uses a multi-layer fabric roof that stows in a dedicated compartment at the rear. The model enters BMW’s M line-up as a replacement for the rear-wheel-drive M6 Convertible and a high-end rival to the likes of the Mercedes-AMG S63 Cabriolet.

The M8’s four-wheel-drive system draws on developments brought to the latest M5 and offers the choice between standard 4WD, 4WD Sport and, with the Dynamic Stability Control (DSC) system switched off, a pure rear-wheel-drive 2WD setting.

Underpinning the new BMW M flagship is an adaptive M suspension system, with double wishbones at the front and a five-link arrangement at the rear, together with variable damper control. 20-inch wheels feature on both variants, shod in 275/35 front and 285/35 rear tyres. The steering uses a further-developed version of the M850i’s electric power steering system, with an M-specific tune for the electric assistance and variable ratio.