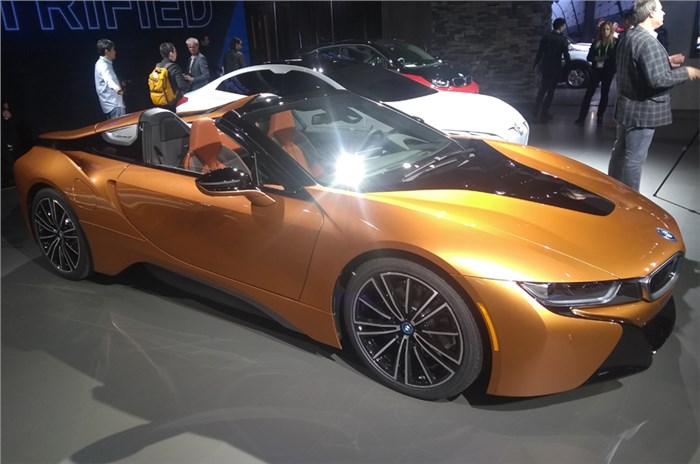 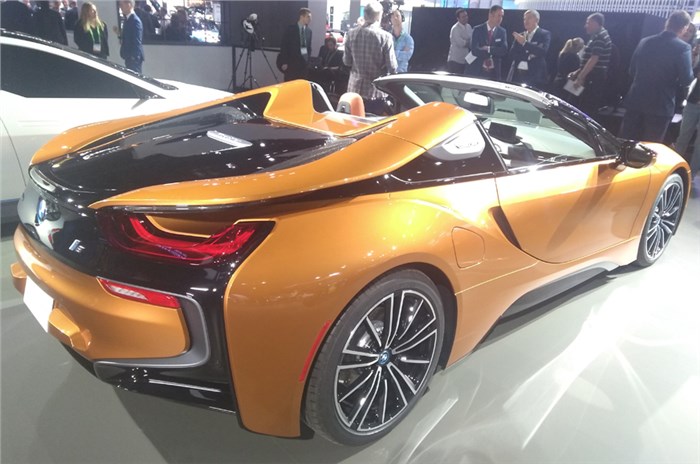 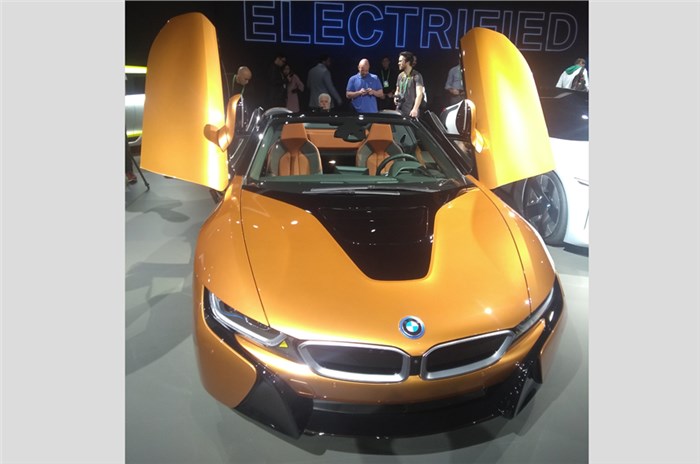 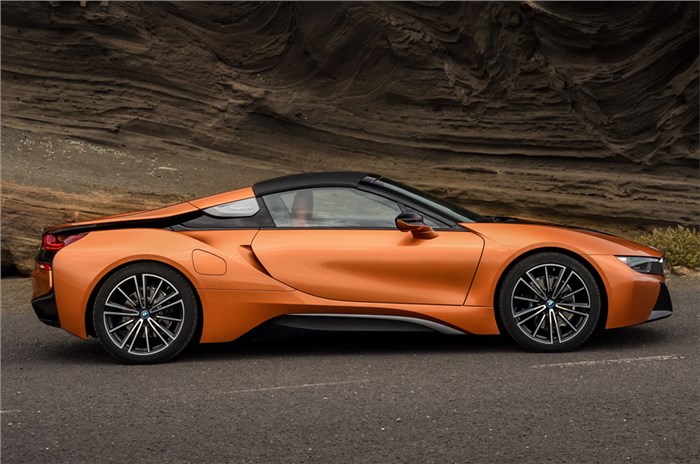 The i8 Coupe, which was also showcased at the 2017 LA Auto Show, also gets a facelift for 2018 along with an increase in power.

BMW has finally revealed the production-spec i8 Roadster at the ongoing LA motor show, five years after the original concept had been showcased at the 2012 Beijing motor show.

The two-seat drop-top has been shown alongside a facelift for the i8 Coupe; both models share nearly everything from the 374hp hybrid powertrain and new design to the interiors and features.

The first open-top model from BMW’s electric i sub-brand, the Roadster’s roof automatically stows beneath a panel integrated within the two buttresses behind the cabin, at the press of a button. The soft-top roof, made up of a large fabric panel and integrated header rails, is claimed to open in just 15 seconds at speeds of up to 50kph.

BMW has revised the windscreen by providing it with a strengthened frame and beefed-up quarter windows in order to accommodate the new folding roof. The rear window is also a wind deflector and has been modified to close or open independently of the roof.

In terms of design, the i8 Roadster differentiates itself from the Coupe by using new black panels overlaid with aluminium trims (etched with the word 'Roadster') instead of the rear side windows. Another major difference is the liftback tailgate has been replaced with a long engine cover.

Weight gain over the Coupe is claimed to be just 60kg at 1,594kg, thanks to the i8’s carbon-fibre-reinforced plastic and aluminium structure.

On the inside, the Roadster is a two-seater rather than a 2+2 seater like the coupe, releasing about 92 litres of space in the bargain. The dashboard design is shared between the coupe and convertible and features the latest version of BMW’s iDrive system that now comes with touch control on the free-standing 8.8-inch monitor.

Other new bits in the Roadster’s cabin includes freshly designed seats, an optional heads-up display and a a range of new trim options, including carbon-fibre elements for the dashboard and ceramic controls within the centre console.

Both cars are powered by a reworked version of the previous petrol-electric hybrid system. A mid-mounted turbocharged 1.5-litre three-cylinder petrol engine works in conjunction with a front-axle mounted electric motor. When running on pure electric power, drive is sent to the front, though when both motors are running, power is sent to all-four-wheels.

The petrol unit, which is mated to a six-speed automatic, is unchanged in terms of output (231hp and 320Nm) but the electric motor gets about 12hp more, increasing total system output to 374hp. The electric motor’s torque rating is the same at 250Nm, and is mated to the same two-speed gearbox.

BMW claims the Roadster is capable of hitting 100kph from a standstill in 4.6 seconds, while the i8 Coupe facelift does the same in 4.4 seconds. Both are electronically limited to 250kph.

Another change to the powertrain is the new lithium-ion battery that now boasts a cell capacity of 34Ah (up from 20Ah) and an energy capacity of 11.6kW (up from 7.1kW). BMW claims that the battery provides up to 53km and 55km of pure electric range for the Roadster and Coupe respectively. In this mode they will also not be able to exceed 120kph.

BMW’s latest 360 degree electric charging system is new and combined with the latest evolution of the its i charging station, it provides 7.2kW charging and a claimed 80 percent state of charge for the i8 Roadster and facelifted i8 Coupe in less than three hours.

The Auto Expo 2018 will see BMW showcase the i8 Roadster in India for the first time and launch the drop-top in the country.