Due to launch in India next year, the fifth-gen City will compete with the Hyundai Verna facelift, Maruti Suzuki Ciaz, VW Vento, Skoda Rapid and Toyota Yaris. 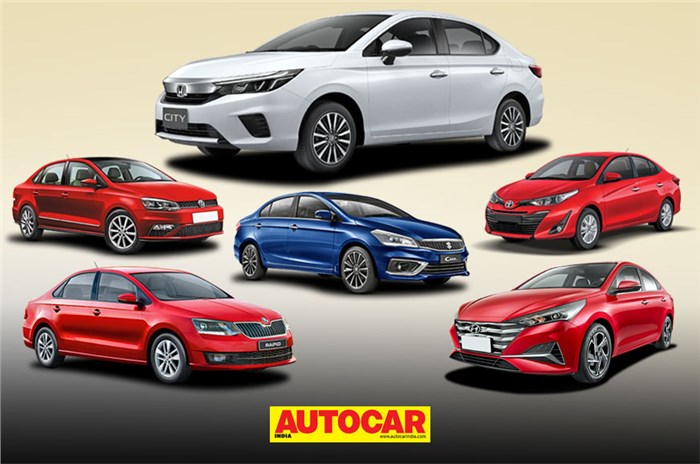 Midsize sedans might not be as hot as they once were but there’s never really been a shortage of options. And to amp things up, Honda will bring the all-new, fifth-gen City to India in mid-2020. By that time, Hyundai will also have brought out its updated Verna, which is another popular midsize sedan.

The fifth-gen City will have its work cut out for it when it does launch in India, which is why we’ve lined it up against its future rivals – on paper – to see if it’s got what it takes.

The new Honda City is not only longer and wider than the outgoing model but it's now also the longest and widest car in the segment. Interestingly, the new City’s wheelbase is 11mm shorter than the earlier model. Going purely by the numbers, it’s the City with the promise of most shoulder room, while the Ciaz should maintain its lead in the all-important area of rear-seat legroom.

*Measurements are of the international-spec model and may differ from the India-spec car.

The updated Verna is also marginally longer than the model currently on sale in India. There’s no change to the 2,600mm wheelbase, however, that’s second only to the Ciaz’s. The Toyota Yaris is among the smaller cars here, while the Skoda Rapid and Volkswagen Vento are par for the course but are the narrowest. The Toyota is also the only model to get smaller 15-inch wheels.

The current City’s BS4-compliant 1.5-litre petrol engine will be upgraded to meet BS6 emission norms, but there aren’t expected to be any other changes besides that. While the Honda engine will outpower its competition, its torque figure isn’t the highest. We’d reported previously that Honda will bring a mild-hybrid petrol City to our market, but that is set to arrive only by 2021. Even the new Hyundai Verna – expected to be powered by the same 1.5-litre petrol engine (shared with the Kia Seltos) – will get a mild-hybrid option. For now, the Maruti Ciaz is the only model that offers this tech. The VW Group will not be upgrading the current Vento and Rapid’s 1.6-litre engine (or even the Vento’s 1.2-litre turbo-petrol engine) to BS6-spec. The German carmaker will instead be bringing a heavily localised version of the 1.0-litre turbo-petrol engine, which is likely to be in its higher 115hp/200Nm state of tune.

Do note that the Thai-spec Honda City comes with a 1.0-litre turbo-petrol engine that is tuned to produce 122hp and 173Nm of torque, and is paired with a CVT automatic only. India won’t get this engine.

Coming to the diesel engine options, the Yaris is the only midsize sedan that at the moment does not have this option. However, come April 2020, the Volkswagen Vento and Skoda Rapid will also be petrol-only models. Maruti Suzuki is testing a BS6-compliant version of its 1.5-litre DDiS225 diesel engine, but there’s no confirmation on when (or if) it’ll arrive under the bonnet of the Ciaz.

It is likely that the Honda City diesel (the current 1.5-litre unit will be upgraded to comply with BS6 norms) will only have the diesel Hyundai Verna facelift to contend with. The Hyundai is expected with the Seltos’ 1.5-litre diesel engine, which comfortably outpowers the Honda unit, despite producing 13hp and 10Nm less than the current Verna’s 1.6-litre diesel unit.

*Features are of the international-spec model and may differ from the India-spec car.

On the safety front, the Toyota Yaris will still be the midsize sedan with the most safety features. While the new Verna for the Chinese market comes with a front collision warning brake system, a driver fatigue monitor and a lane-keeping assist system, the India-spec Verna facelift is unlikely to get any of these. The new Honda City adds hill-start assist and ESC to the older model’s fairly long list of safety features, at least for the Thai market. Whether this tech will come with the India-spec 5th-gen City is yet unknown.

*Features are of the international-spec model and may differ from the India-spec car.

Coming to the equipment on offer, all cars will have most of the basics covered, and this includes auto climate, touchscreen infotainment, steering-mounted audio controls, cruise control and smartphone connectivity. However, if the China-spec Verna is anything to go by, it’ll be the Hyundai that'll lead the features count. A full-digital instrument cluster, connected car tech and wireless charging are some of the features that could make it to the India market. The new City in its international spec seems to be par for the course with the remainder of the segment.

As it stands, based on the information available, the Verna facelift makes a good case for itself, both in terms of engines and equipment. And given that Hyundai offers a sizeable equipment list on its cars, we can expect generous kit on the India-spec car as well. The new Honda City, on the other hand, is likely to continue to attract the more self-drive-focused buyer with a strong petrol engine and equipment that is expected to be par for the course in the segment. The Yaris does stand out in terms of the safety kit on offer, while the Ciaz’s strength is in the amount of equipment it offers at a lower price point than current rivals.

Hyundai is expected to launch the heavily updated Verna in India in the first half of 2020 with the all-new City expected to arrive shortly after. The Rapid and Vento are also due for a replacement with both models having soldiered on for the better part of a decade. VW Group India is working on a replacement for both, though the new models are likely to arrive only in the latter part of 2021.