Priced from Rs 4.19 lakh to Rs 5.69 lakh, the new-gen Maruti Suzuki Wagon R promises to be a compelling package but, how does it compare with its rivals? We find out. 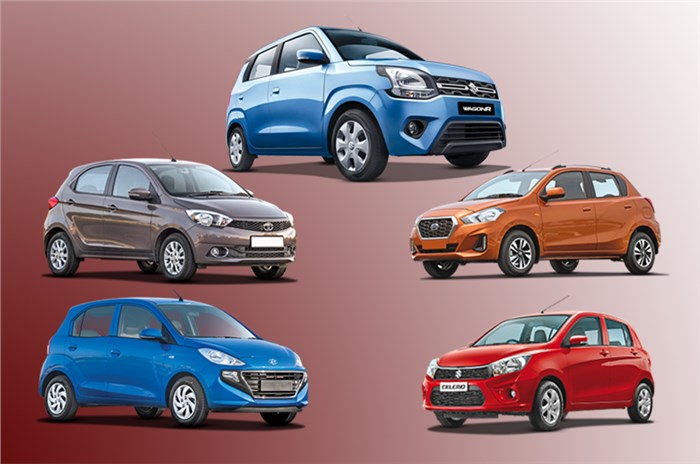 Maruti Suzuki has finally launched the 2019 Wagon R at Rs 4.19 lakh. The new model is bigger than before, feature-loaded and comes with a new engine, too. Over the years, the tall-boy hatchback has proven to be a huge success for the manufacturer, consistently featuring in the list of highest-selling cars in India. Now however, the Wagon R faces stiff competition in the tightly-contested budget hatchback segment from rivals like the Tata Tiago, the newly revived Hyundai Santro, the recently-facelifted Datsun Go and even Maruti’s own Celerio. Let’s see how the Wagon R compares to its rivals, on paper.

First, let’s take a look at the new Wagon R’s prices in comparison to the competition:

*CNG variants have been discounted in prices table

^Tiago prices are for petrol variants only

The new Wagon R is based on Suzuki’s Heartect platform, which has made it larger, albeit lighter than its predecessor. It’s 19mm longer, 125mm wider and has a 35mm longer wheelbase. This means that the Wagon R will retain and improve on its USP-cabin space. The Wagon R is the tallest and lightest hatch in this comparison while the Datsun Go has the longest wheelbase and overall, is the longest car too. At 32 litres, the Wagon R’s fuel tank has the smallest capacity in comparison to the 35 litres of the competition. Wheel and tyre sizes are identical on all cars – except the Tiago, which gets wider tyres.

As we have mentioned earlier, the new Wagon R retains the outgoing model’s 68hp, 1.0-litre, three-cylinder K10B engine. Also on offer is the larger 83hp, 1.2-litre, four-cylinder engine (K12M) borrowed from Maruti Suzuki’s larger hatchbacks such as the Swift and the Ignis. In terms of power and torque, the new engine brings the Wagon R at par with the Tiago and gives it an edge over the other competitors. Also, the Wagon R’s 1.2-litre engine and the Santro’s engine are the only four-cylinder units in this comparison. A 5-speed manual gearbox is standard on all these hatchbacks, and an AMT is available on all except the Datsun Go. The Hyundai Santro and the Maruti Suzuki Celerio have the option of a CNG-powered variant which will also be introduced in the new Wagon R soon, albeit with just the smaller 1.0-litre engine.

As is the trend nowadays, all hatchbacks here, apart from the Celerio, are fitted with a 7.0-inch touchscreen infotainment system with Apple CarPlay and Android Auto compatibility. The Tiago’s unit however only supports Android Auto. The new Wagon R, like the Go, gets LED daytime running lamps which are not offered with the other models here. However, the Wagon R misses out on alloy wheels which all the others, apart from the Santro, get. In their top-spec trims, all cars get dual airbags. However, it’s only to Datsun Go that gets dual airbags as standard across the range. All the cars here are equipped with ABS and EBD, rear parking sensors, a seat-belt reminder and a driver airbags as standard to meet upcoming safety norms in India.

The Wagon R has always been a value-for-money buy. The new Wagon R takes this even further thanks to the new engine option and a roomier, feature-rich cabin. And with a starting price of Rs 4.19 lakh, the Wagon R is ready to take on its the competition head-on. The top-spec ZXI trim, priced at Rs 5.69 lakh, is right in the mix with its rivals, too. Looks like the new tall-boy will continue the long-standing success story of the Maruti Suzuki Wagon R in India.