Jeep will showcase the Gladiator pickup-based concepts at the upcoming Easter Safari meet in Utah. 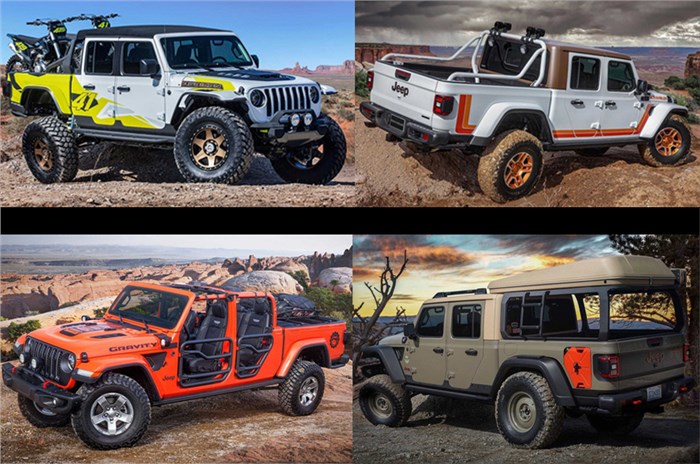 It's been a Jeep tradition to reveal a number of concepts before showcasing them at the annual Easter Safari that takes place in Moab, Utah, United States. This year, the carmaker has focused on the Gladiator pickup truck that was unveiled in late 2018. The Gladiator marked Jeep’s re-entry to the pickup truck segment, as the last pickup sold by Jeep was the Comanche that went out of production in 1992.

We have put together a list of all the Gladiator-based concepts that were revealed in the run-up to the 2019 Easter Safari. All the concepts are based on the top-end Gladiator with the 3.6-litre petrol V6 that produces 285hp and 353Nm of torque, except the M-715 Five-Quarter concept which uses a different engine. 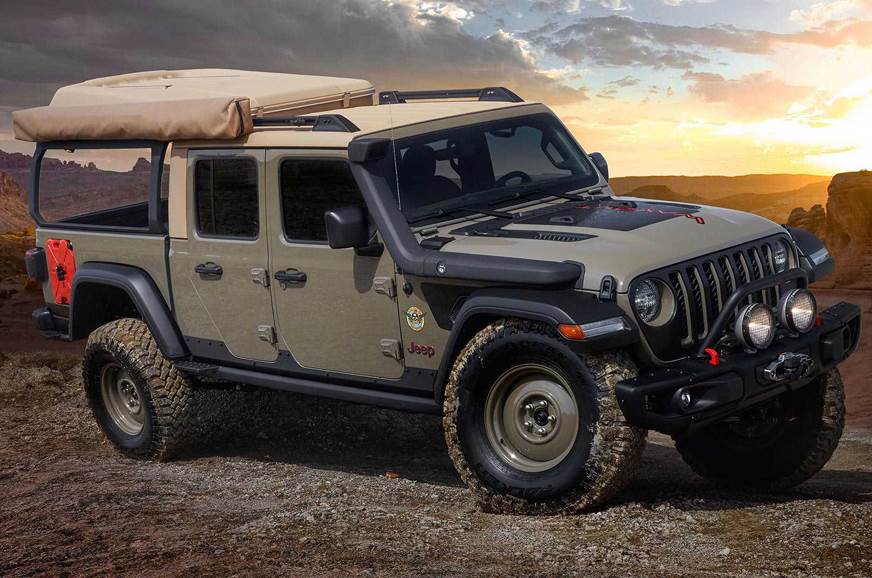 The Jeep Gladiator Wayout concept has a pickup bed that's been converted into a two-person tent, complete with an expandable canopy roof. Jeep has also fitted it with LED lights, an engine snorkel that goes up along the A-pillar, 17-inch steel wheels with 37-inch mud tyres (tyre size in diameter) to tackle rough terrain. The concept also comes fitted with an ARB air system that allows you to refill the tyres whenever and wherever required. 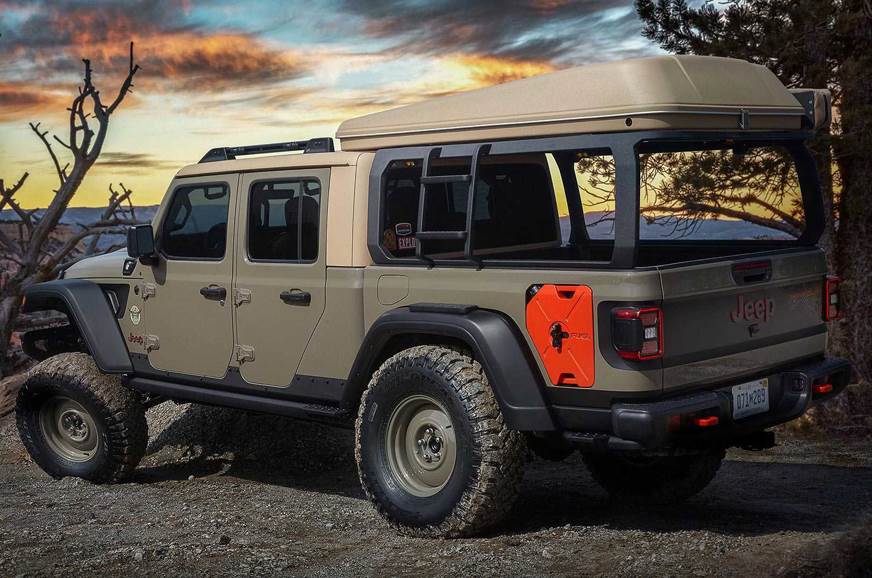 Another cool feature is that the leather seats have laser-etched topographical maps on them. The Gladiator Wayout has been finished in pale military green and the canopy is finished in a khaki colour. It also sports Wayout liveries on the bonnet and tailgate along with red jerry can livery at the rear. 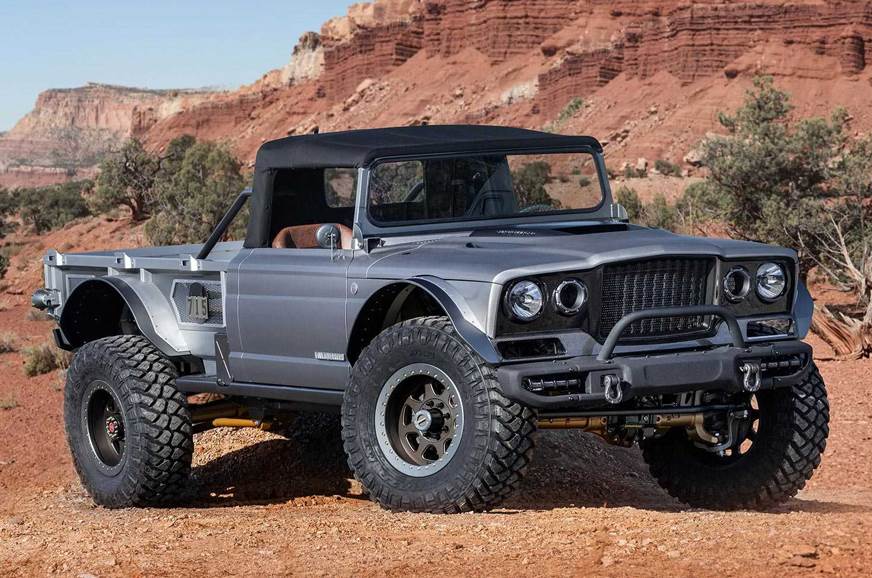 The Gladiator M-715 Five-Quarter serves as a throwback to Jeep’s M715 military truck from the 1960s. The Five-Quarter name comes from the original trucks ability to carry a payload of up to one and a quarter tons or five-quarters. Despite the pickup’s retro appearance, it is based on a modified version of the new Gladiator and has a carbon-fibre front end, HID headlights with LED auxiliary light bars. The original tail-lights have been retained but get LED lights here. The 6ft-long aluminium pickup bed sports wood slat inserts. The concept is painted in a light metallic grey and its wheels are finished in a bronze and grey dual tone. The car also has acid green accents on the interior and the pickup bed. The M-715 Five-Quarter has also received mechanical updates in the form of the Dynatrac Pro-rock 60 front axle and Dynatrac Pro-rock 80 rear axle. The original pickup’s leaf-spring suspension has been replaced by a link and coil suspension. The M-715 Five-Quarter rides on 20-inch wheels with 40-inch off-road tyres (tyre size in diameter) on it. However, the most intriguing update is under the hood; the pickup is powered by a 6.2-litre, supercharged V8 from the Dodge Charger Hellcat which produces over 700hp. 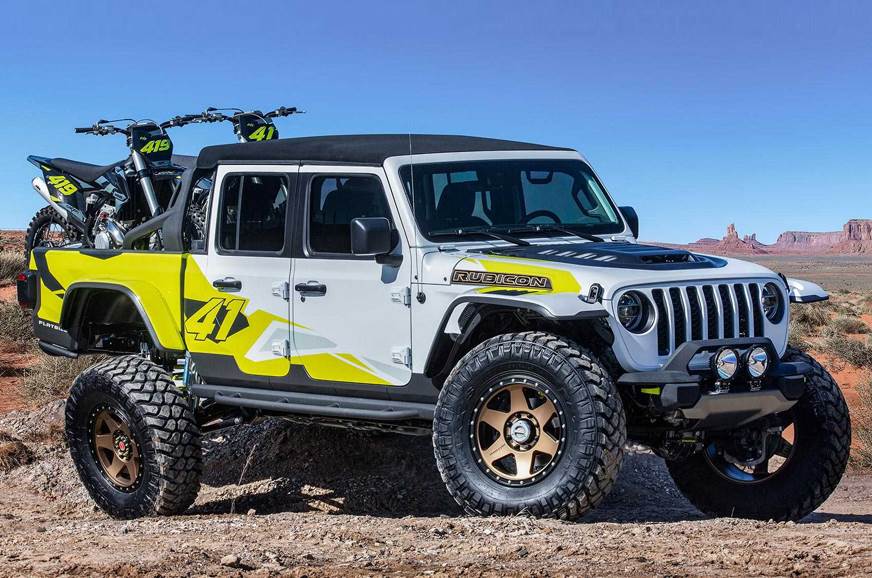 The Jeep Gladiator Flatbill has been optimised for off-road use as it has shorter front and rear bumpers to improve the approach and departure angles. It has high-clearance fender flares that allow maximum wheel articulation while remaining road legal, along with a vented carbon-fibre hood.

Mechanical upgrades are in the form of the Dynatrac Pro-Rock 60 front and rear axles along with a 4-inch suspension lift. Jeep has also equipped the truck with large bypass rear shocks so it can soak up big bumps better. The Gladiator Flatbill rides on 20-inch wheels with 40-inch tyres (tyre size in diameter) to improve its off-road ability. The concept's party piece, however, is the storage space for two dirt bikes on the pickup bed, along with integrated slide-out ramps for easy loading and unloading of bikes. 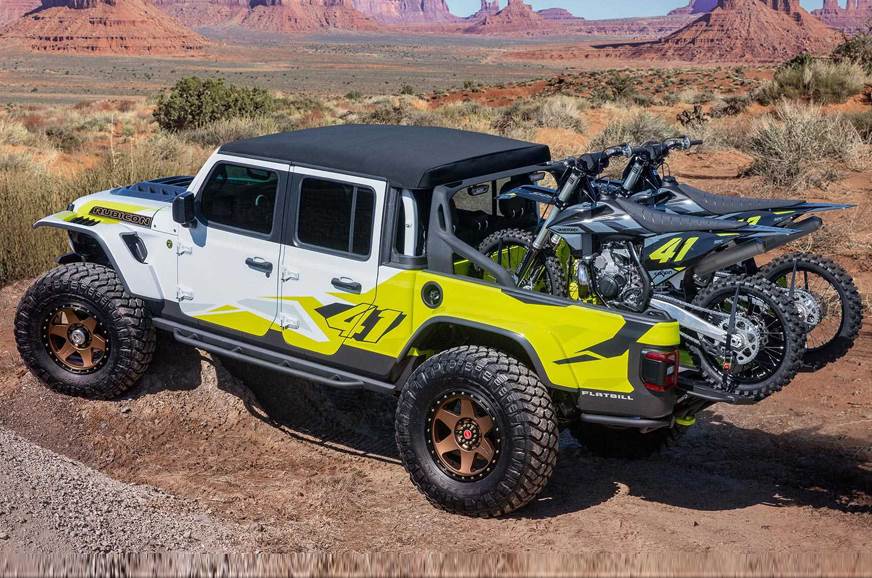 The Flatbill has been finished in white and sports a black and neon yellow livery. The 20-inch wheels are finished in a bronze colour. Jeep currently only sells the Gladiator pickup in the four-door cab layout. The Gladiator J6 is a look at what a potential two-door cab layout could look like. The designers have taken inspiration from the 1970 Jeep Honcho two-door pickup, both in terms of the design and the proportion. The concept has been finished in a bright blue paint job. 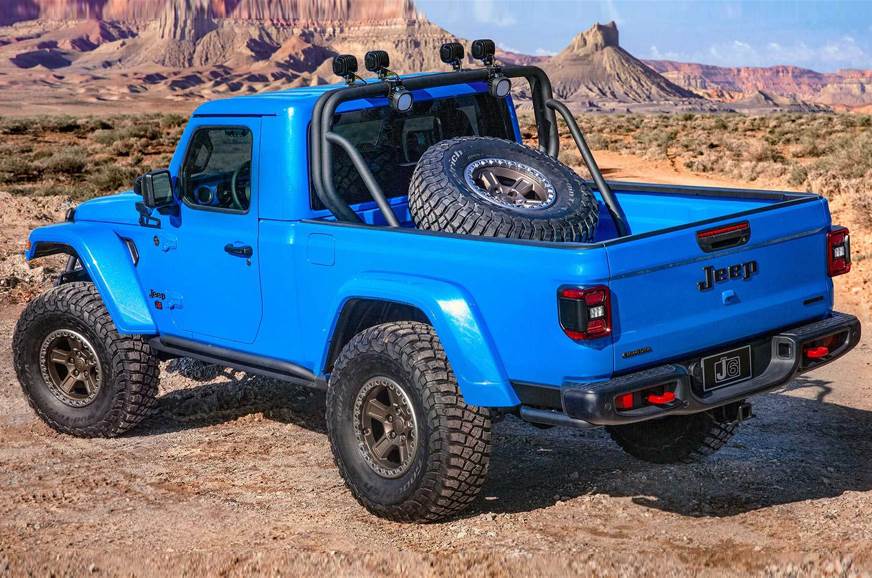 And the result of a two-door layout is that the bed has been increased by 12 inches. The pickup bed has been lined with a special body-coloured, spray-in bed-liner and also gets matte black roll bars with LED lights attached at the top. It has also been fitted with a two-inch lift kit. The J6 rides on a set of 17-inch prototype; five-spoke beadlock wheels with 37-inch tyres. 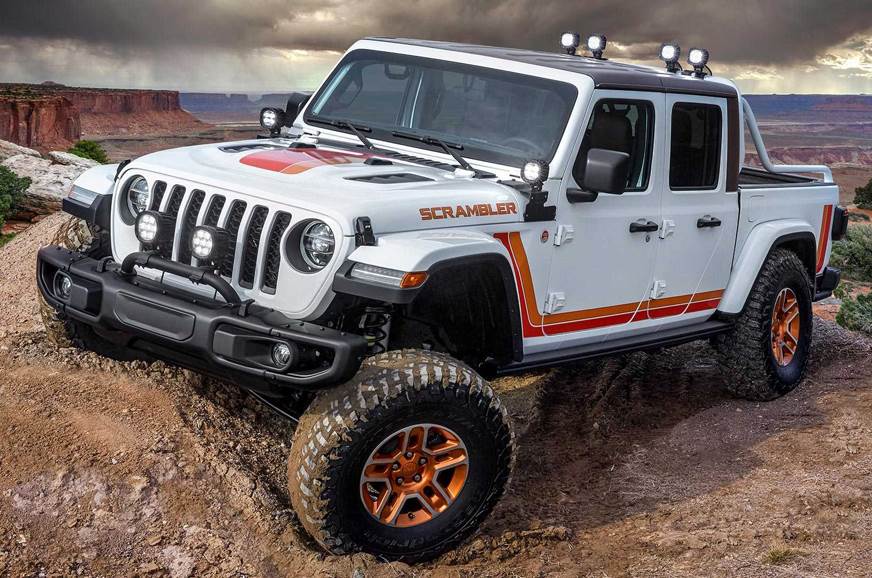 For a long time before the official launch of the Gladiator, it was speculated that Jeep’s new pickup truck would be called the Scrambler – a throwback to the model Jeep sold in the 1980s. This concept indulges that notion and brings back the Scrambler name, even if as a concept. 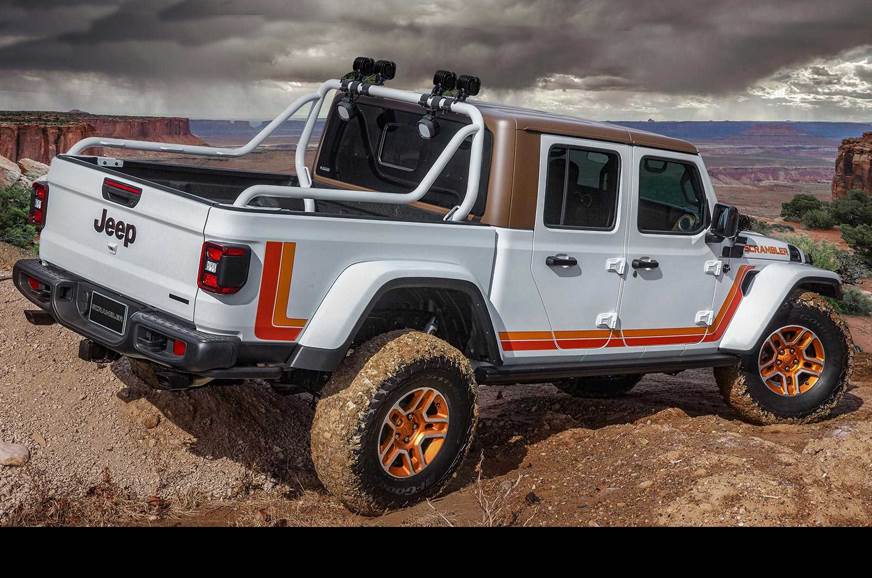 The concept is a regular Gladiator fitted with a 2-inch lift kit and also has rock rails on both sides. Visually, the main difference is that the JT Scrambler is painted white, and sports a dual tone orange livery that goes along the hood and sides of the pickup. The bed also gets special body-coloured, spray-in bed-liner and white roll bars with LED lights on top. The look is completed with the 17-inch orange wheels which are wrapped in 37-inch tyres (tyre size in diameter). 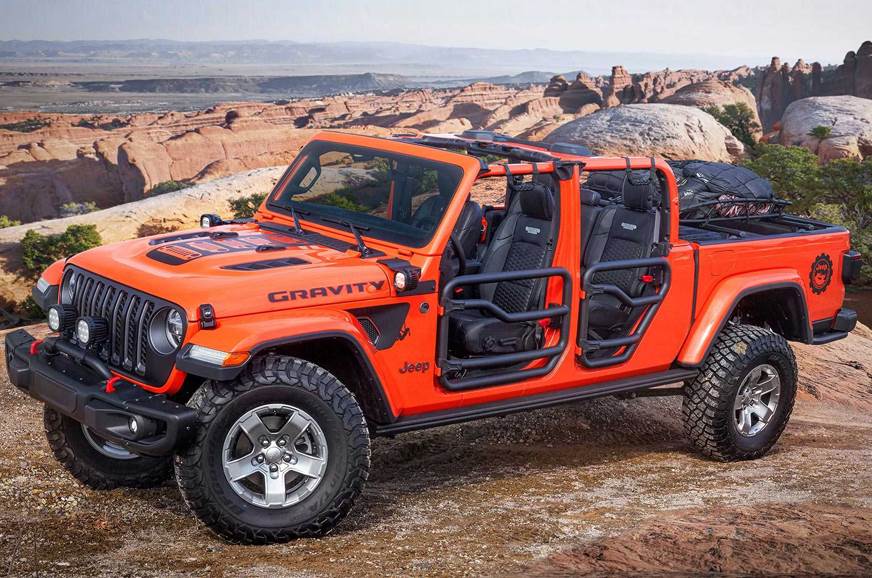 The Gladiator Gravity concept is built with rock-crawling in mind as Jeep has equipped it with a 2-inch lift kit for improved ground clearance. It also comes with rock rails going along the sides of the pickup and tubular doors instead of regular doors for added visibility and durability. The standard roof has also been replaced with a mesh roof. The pickup concept is painted in a bright shade of orange and sports black ‘Gravity’ stickers on the side of the hood. The wheels are finished in a standard silver colour. 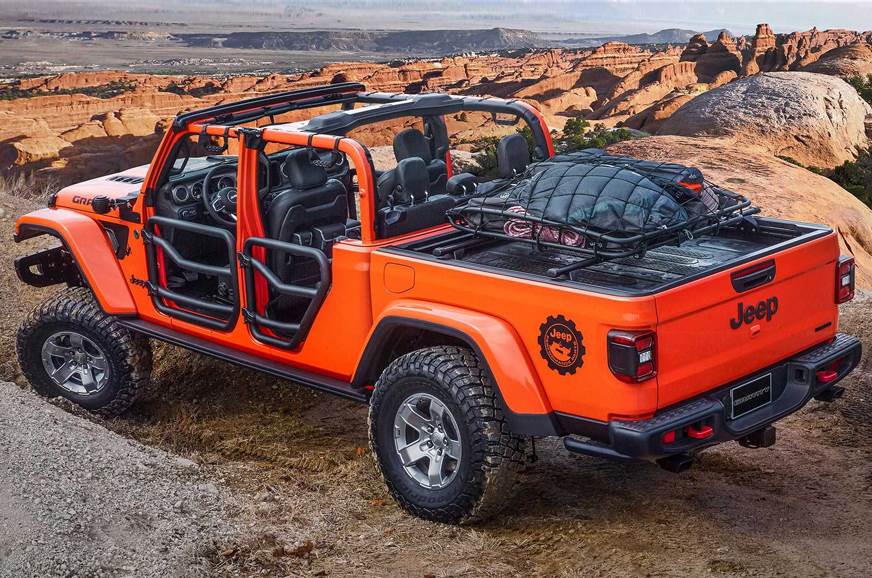 There are no changes made under the hood, though the pickup bed has been modified to provide two levels of storage, with the lower portion housing slide-out drawers for easier access. There is also additional lighting on offer with a pair of 7-inch LED lights on the grille as well as two 5-inch LED projectors mounted on the base of the A-pillars. The Gladiator Gravity concept is riding to a set of five-spoke, 17-inch wheels with 35-inch tyres (tyre size in diameter).