A mid-life refresh sees the Figo receive new petrol engines and an automatic gearbox along with updated styling and more equipment. 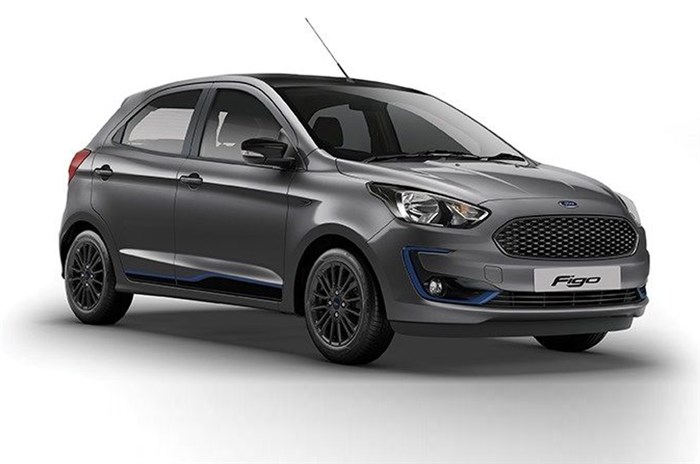 It was in October last year that Ford gave the Aspire compact sedan a mid-cycle update with refreshed styling, an updated equipment list and most importantly a choice of new petrol engines and automatic gearbox. However, the Figo – it hatchback sibling – soldiered on unchanged. Now Ford is set to update the Figo and bring it in line with its compact sedan sibling. Prices for the new Figo facelift start at Rs 5.15 lakh, and go up to Rs 8.09 lakh (ex-showroom, India).

Here is what you should know about the updated hatchback:

2. Styling in line with the Aspire

The mid-cycle update sees the Figo get stylistic elements similar to those seen on the Aspire compact sedan. Cosmetic changes include a revised honeycomb grille, new bumpers along with new 15-inch alloy wheels. Additionally the top trim levels feature blacked-out styling elements such as the wheels, door mirrors, grille and roof to give it a sportier look. The cabin has been updated too, with a revised centre console and new control surfaces.

3. Available in only three trim levels

While the pre-facelift Figo was available in a choice of five trim levels – Ambiente, Trend, Titanium, Titanium+ and Sports Edition, Ford has now streamlined its hatchback’s line-up to just three trim levels – Ambiente, Titanium and a new range-topping Titanium Blu. Compared to the other trims, the Titanium Blu gets sportier styling elements mentioned above. All three variants are available with the 1.2-litre petrol and the old 1.5-litre diesel engine options; while the Titanium trim also has the new and more powerful 1.5-litre petrol paired with the automatic gearbox on offer.

Ford already offered the Figo with some essential safety kit like dual airbags as standard, with the top variants featuring six. With the facelift, the car now gets ABS, a speed-alert system, seat-belt reminders and rear parking sensors as part of the standard kit to comply with upcoming regulations.

In terms of convenience features, the car now gets kit such as keyless entry, push-button start, automatic headlamps, rain-sensing wipers, a reverse camera and a touchscreen infotainment system with Bluetooth connectivity and navigation. The Ford SYNC3 infotainment system from the Aspire, though, has been given a miss.

In terms of rivals, the Figo facelift is positioned to face-off against the likes of the Maruti Suzuki Swift (Rs 4.99-8.85 lakh), Hyundai Grand i10 (Rs 5.01-7.62 lakh) and the Volkswagen Polo (Rs 5.80-9.70 lakh). It has been priced at par with the segment, although the top-spec petrol-automatic variant is fairly pricey. However, the new facelift is up to Rs 74,000 cheaper than the outgoing model, depending on the variant in question.