The refreshed Ford Figo is offered in seven variants and two new petrol engines; continues to rival the Maruti Suzuki Swift and Hyundai Grand i10. 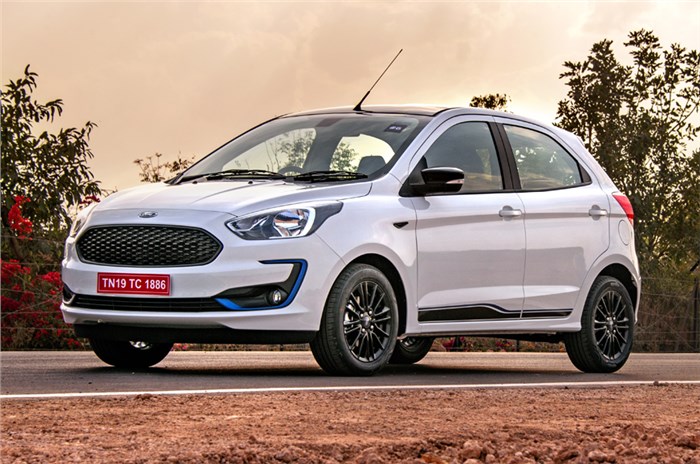 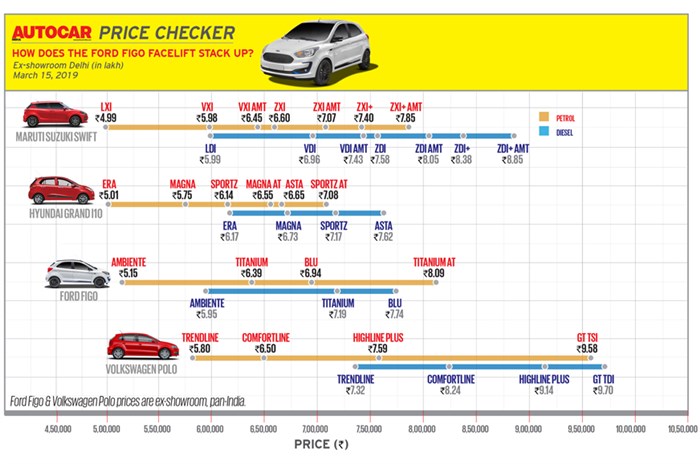 Ford has launched the Figo facelift in India at Rs 5.15 lakh (ex-showroom, India). At this price, the updated Ford Figo starts at about Rs 70,000 less than the model it replaces. The refreshed hatchback comes in seven variants with three engine-gearbox options for buyers to choose from.

In terms of appearance, the Figo facelift sports minor changes over its predecessor. It gets revised front and rear bumpers, a new honeycomb front grille, tweaked headlights and new 15-inch alloy wheels. The Titanium Blu variant gets blacked-out mirrors, front grille and roof for a sportier look. It also gets a different design for the alloy wheels and black decals on the doors and boot lip.

Ford has tweaked the Figo’s interior as well, bringing it in line with the cabin of the Ford Aspire facelift and Ford Freestyle. The new top-spec Titanium Blu variant is feature-rich with equipment like automatic climate control, keyless entry, push-button start/stop, automatic headlamps and wipers, parking camera and a 7.0-inch touchscreen infotainment system. Interestingly, Ford has decided to leave out the Sync3 infotainment system which gets Apple CarPlay and Android Auto.

In terms of safety, all variants of the Figo facelift get dual airbags, ABS with EBD, rear parking sensors, seatbelt reminders and a speed-alert system in order to comply with upcoming safety norms. The top-of-the-line Titanium Blu trim also gets adjustable rear headrests and a class-leading six airbags. Furthermore, the petrol-automatic Figo gets additional safety benefits in the form of ESP, traction control and hill-start assist.

A major talking point of the Figo facelift is the introduction of two new petrol engines. There’s a 1.2-litre, three-cylinder unit that makes 96hp and 120Nm of peak torque, mated to a 5-speed manual gearbox only. The other new petrol engine is a 1.5-litre, three-cylinder unit that puts out 123hp and 150Nm of torque, mated to a 6-speed torque converter automatic gearbox. The 100hp/215Nm, 1.5-litre diesel engine is carried forward from the earlier model and will send power to the front wheels via a 5-speed manual gearbox.

As was the case with the Aspire and Endeavour facelifts, Ford has lowered the price tag of the Figo to help it compete better with its established rivals like the Maruti Suzuki Swift, Hyundai Grand i10 and Volkswagen Polo. Given below is a table comparing the prices of the Figo facelift and its predecessor.