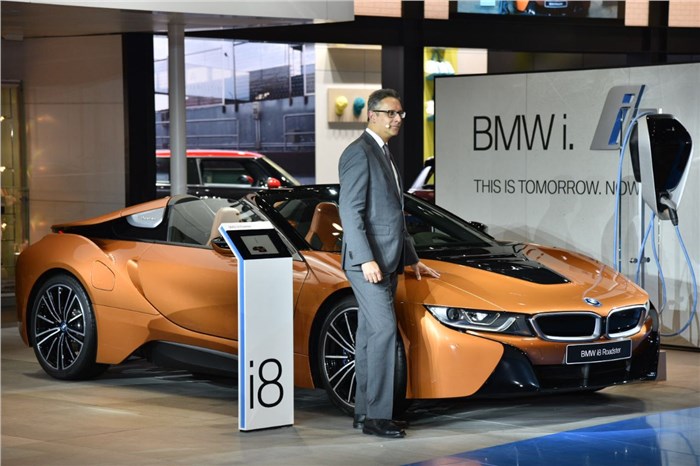 Roofless version of BMW’s plug-in hybrid sportscar does 0-100kph in 4.6sec; to launch in India later this year.

The drop-top version of BMW’s radical i8 has debuted in India at the 2018 Auto Expo. The i8 Roadster will join the i8 Coupe as a halo model in BMW’s India range when it launches later this year.

The BMW i8 coupé blew everyone’s minds when it was launched back in 2015– not so much because of its outright performance but for its futuristic take on the mainstream sportscar. It looked radical, inside and out; and the way it incorporated hybrid tech so seamlessly into the driving experience made it rather unique.

The roadster version has been a long time coming; but it has been launched in India very soon after its global unveil. There is a weight penalty for the folding roof – but it’s just 60kg and the fabric roof itself slips away or back again in just 15 seconds. And finally, the barely-usable rear seats from the coupé have been swapped for a bit of luggage space – a far more practical use of the space.

You still get a mid-mounted, 1.5-litre, three-cylinder turbo-petrol motor which is good for 231hp, as well as an electric motor at the front; but the i8 (coupé and Roadster, alike) has now been given 12hp more electric power and a greater electric driving range, thanks to better batteries. The new total output is 374hp.

The i8 Roadster is a rival to the convertible versions of the Jaguar F-type, Porsche 911 Turbo and Mercedes-AMG GT, though the BMW is less powerful than its rivals. As with the coupé, though, the i8 is more about making a statement (and looking seriously cool while doing so) than having the fastest, quickest or loudest car on the block.