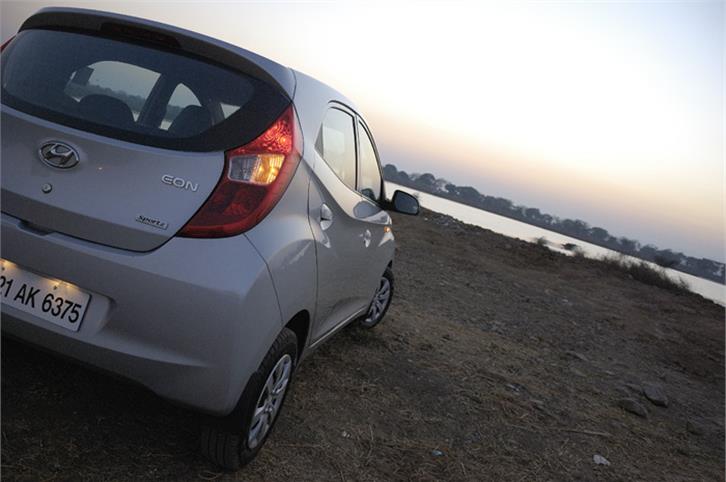 Rear seat not very spacious and window line is quite high.

Boot is very spacious for this size of car.

Our Little Eon goes through a family weekend. So how does it fit in the scheme of Sunday things?

The family is getting spoilt is what I’ve realised. They are getting too used to the perks of my job. After a weekend with the BMW X3, all three family members looked at me in disdain when I took them down to see our new ride – the Eon. Now, why I always bring my family into the picture is because they are like most of you who are reading this – the real consumers.

I drive different cars every day and sometimes, in the effort to put things like class and price in the right perspective, I get a little too clinical. With my family, a “blah” or a “wow” is just natural response. So our long-term Eon was put not only through mine but through their acid test too!

I drive to work and back on a daily basis and my job was to figure (at the cost of sounding corny) if one could live an eon with the Eon! The trips from office to home and back actually became less frustrating than normal with the little car being extremely agile in traffic. Also the front seats are very comfortable and you can spend a long time behind the wheel without fatigue. The Eon’s engine – well, it’s not exciting but it gets the job done. The only bit I found irritating was the hesitation at low speeds. The thing is, the Eon ambles around in higher gears at low speeds quite easily, but when you do put your foot down to get going, there is a little surge of power and it makes the car feel somewhat jerky. Otherwise the Eon makes light work of city traffic and though you don’t really need to use it much, the gear lever is easy to operate. The aircon is really good too and cools the car in a jiffy – on most occasions, I’ve only had to use the minimum fan speed. But with an abnormally cool winter, that’s not surprising. The true test for any aircon is in May.

The ride at low speeds is surprisingly pliant for such a small car but on the flipside, it’s soft and tends to toss you around at higher speeds.

When I arrive home from work, I tend to always rush to get a parking spot (test cars usually take up all available space). However, with the Eon I was less stressed than usual and with reason – I could manage to squeeze it into a nice, tight spot with ease. The car literally turns on a coin and is a parallel parker’s delight.

Having done my bit through the week, Sunday morning was really the acid test. Sunday is not really a rest day – it’s errands and fetch-and-drop day. So the morning kicked off with a bit of household shopping. My husband looked at me incredulously when I suggested we take the Eon, but he resigned himself to the fact that I had made up my mind.

“There is something wrong with this steering, it feels like a toy,” were his first words, and he had barely driven 500 metres. He had hit the nail on the head. That is really the biggest downfall of the Eon. The steering does nothing for the first 5 degrees off-centre and then suddenly gets sharp. It takes getting used to, but even when you do it never inspires confidence.

That flaw aside, he was pretty impressed. He liked the car’s looks and interiors, especially when he heard the price. However, at the grocery store, he was convinced that my load was never going to fit in. And so he was taken aback when it all went into the boot – except for the carton of milk that had to go on the back seat. But for all the space in the boot, the back seat is really cramped. We discovered this when dropping off my daughter to her class. “Mom, this is really claustrophobic!” Even with my seat pulled fully to the front, she barely had room. With the window line going up, the glass area is small too – she decided she didn’t like it at all.

Well, the car is still pretty new – 1066km on the odo – and besides an irritating rattle near the right B pillar, it feels quite well put together. Could I live an eon with the Eon? Well, yes, if I didn’t have a large family and just had to transport myself to work and back. It’s a nice, little city car.